A Special Note Here Folks! The source and/or sources for the Marvel Scripts that I have been blessed to read are obviously not inside Avi Arad's office... that was a "ha ha" a "joke" an "april fools". The real sources are protected and safe far from the peering eyes of any studio sources. They are... like DarkMan... Everyone and noone. Though I would love a spy at Avi's offices (hint hint), I do not yet have one. If I did, I'd know how the latest draft of FANTASTIC FOUR is... or a more recent draft of Hayter's HULK or even the newest draft of Mark Steven Johnson's DAREDEVIL... which was just turned in, or so I'm told. I had the pleasure to speak briefly with Avi Arad moments ago and asked about the tone of DAREDEVIL and whether or not the studio was going to go along with the toughness that Mark was bringing to the script. And his answer was, "Even Tougher." So it seems, at least now, that Fox gets the script and Mark Steven Johnson (thank God) and the DAREDEVIL script hasn't fallen on blind eyes and deaf ears... YIPPEE!!!

Hey folks, Harry here… Recently I’ve been blessed with a most excellent spy inside the offices of Avi Arad that has, through nefarious and diligent means, procured for my eyes alone copies of Mark Steven Johnson’s DAREDEVIL script, David Hayter’s HULK script and Tim McCanlies’ IRON MAN script. I’m also told by this devious genius of a spy that all future drafts of Marvel Scripts shall now become as easy to pluck as a daisy’s petals on a spring afternoon… SO STAY TUNED FOLKS…

Now for the order that I read these scripts…

Instantly I delved into the McCanlies draft of IRON MAN. I’ll review it next, because on my flight to New York, I read DAREDEVIL by Mark Steven Johnson and Dear God… Eureka and all that… Mark is now my hero.

I was scared to death of this draft. First off, Mark’s scriptography is kinda scary. GRUMPY OLD MEN, GRUMPIER OLD MEN, BIG BULLY, JACK FROST and SIMON BIRCH. While I like SIMON BIRCH, those that have read the original novel seem to regard it as one of the worst book adaptations of all time. In fact, Moriarty’s Review of SIMON BIRCH is probably one of his angriest, most vitriolic works of writing I’ve seen from him… At least a full equal to my brain burst upon hearing the casting of Matt Lillard in SCOOBY DOO…

Now, as I said… I liked SIMON BIRCH, but had never read A PRAYER FOR OWEN MEANY, which was one of Moriarty’s favorite all time books. Now DAREDEVIL… it happens to be a title that I’ve read every single issue of. Ol Horn Head and I go way back to the yellow and reds. Because I know the character inside and out, I was terrified that upon reading Mark’s script I would be ‘lash out with anger’ mad.

You know the dream of comic book movies? Seeing THE DARK KNIGHT RETURNS turned into a film. Watching FANTASTIC FOUR 48, 49, 50 upon the silver screen? Looking with tear-filled eyes upon Spider-man holding Gwen Stacy’s limp dead body as the Goblin cackles away? Watching Absorbing Man become one with eternity after battling across the rainbow bridge and through Asgard to fight Odin himself? The Kree-Skrull War…. The Phoenix Saga?

You know the chapters and verses that I’m talking about. And in the world of DAREDEVIL, the dream is to see the Elektra saga done to a ‘T’.

We want it ‘R-rated’. We want it to be tough and hard to take… We want Hornhead to win, but to be tapping on Death’s door by the end… wounded and near death not only physically… but his heart split in two… ragged and exhausted to the point of madness itself. 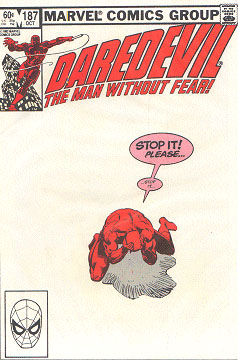 We want KINGPIN and ELEKTRA… We want BULLSEYE cocky and deadly as hell. Blood red needs to be spilt upon a blanket of snow… upon sidewalks and upon legal pages in Matt Murdock’s offices. We want Karen Page and Foggy Nelson! And we want red longjohns and a well balanced billyclub crashing through teeth. 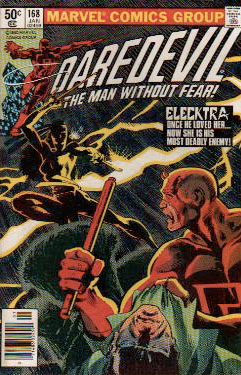 We want this because THIS is the Classic Daredevil. The story that when you shut your eyes and someone asks you, "Why do you love Daredevil?" …well you recall this story. 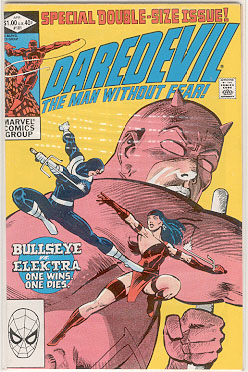 Now so far, through the years and years of pawing through at least 50 some odd Comic Book-to-Film scripts, I’ve never seen 3 simple things.

1. A perfect to the letter origin.

3. And lastly… The Classic Story of the Superhero told to perfection!

Well… I can’t say that anymore. 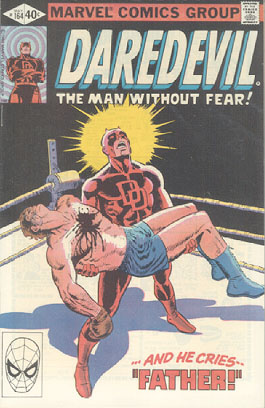 In 120 pages, Mark Steven Johnson crafts a script that takes us from Hell’s Kitchen beginnings of Daredevil… his father… to Matt Murdock in the courtroom… to the entire story of Elektra… to the epic clash of Daredevil and Kingpin. In addition, we see precise and perfect origins and character beginnings for BULLSEYE, KINGPIN and ELEKTRA. 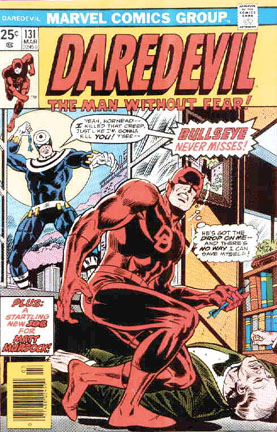 We see Murdock’s scar covered body… him taking Jock-style doses of pain medication to continue to function… sewing himself up… Brutal stuff. We see Elektra kick ass repeatedly. Bullseye killing for sport. We see Battlin’ Jack Murdock kick ass in the ring. Oh, we see a radioactive bio-chemical container hit young Matt Murdock in the head causing his blindness and his extra-sensory perception. 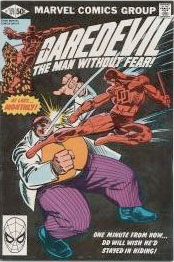 Oh… and the film is brutal emotionally and physically. Our hero gets messed up as badly as the Man with no name in FISTFUL OF DOLLARS…

Now my question comes… Does Mark Steven Johnson have the ability from FOX and New Regency to make an R-rated DAREDEVIL film? If so… Huzzah!

Like I said, I read this on the plane to New York… somewhere over West Virginia I began tearing up… The script reads like an American telling of CROUCHING TIGER HIDDEN DRAGON… that type of action… that type of romance… that type of soul. And it reads tougher and meaner.

On the first page of the script, towards the bottom It reads:

"And he’s bleeding to death."

I don’t know who Mark is going to cast as DD, but I hope it is an actor with the chops to give this character the charisma, angst, sorrow, heroism and despair that is needed to make us love, pity and fear DAREDEVIL… Reading this, it is hard not to imagine someone like Matt Damon or Guy Pearce or Ed Norton becoming the man without fear… but I just hope whoever plays this role brings to the table the talent and the vision that Mark Steven Johnson brought to the page… I’m blown completely away by this script… and pray that it is shown the utmost respect and backing that it needs to become what it is.

Mark, wherever you may be… bravo… job well done! 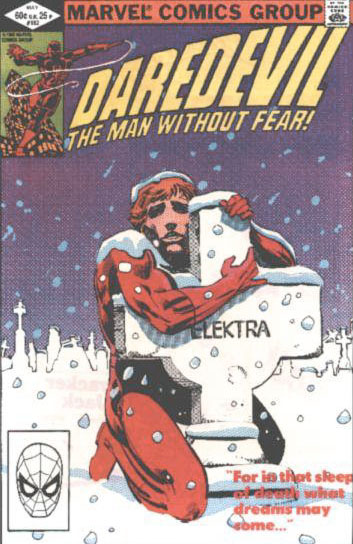