You Want MATRIX 2 Spy Stuff' Pix of Morpheus, Trinity, The Car, The Virus Dudes... You want it, We Got it!!! Oh yeah

Hey folks, Harry here.... Ok, so after trashing my NY hotel room like some sort of Rock Star, losing my voice and playing havoc with the Delta Airlines Flight Schedule.... I just felt like... Well, unleashing... Luckily for me, what should I find all bright and sparkly in my e-mail box when I return from UP IN SMOKE at the Alamo Drafthouse? Well, before I left for New York, I had a series of telephone conversation with an agent in San Francisco named... BURLYMAN! Burlyman has the ability to take photos without security noticing him. In fact, according to urban myth, there might even be more photos on the way.... and in all liklihood, Burlyman is an actual CREW MEMBER.... of course that's just rampant speculation on my part to instill paranoia in the ranks thereby causing greater leaks by way of emotional and mental cracking under the pressure of GEEK EXAMINATION! What is the Matrix? I'll tell ya... The MATRIX is what happens when you give a few million film geeks the ability to coordinate and observe your film set in a carefully orchestrated series of spy watches, hats, shoes, lapel pins, graduation rings and zipper flap! We've got folks hanging out windows, taking shots from sewer drains and tapping on the shoulders of the gods themselves... NOW!!! Before you go any further... you should realize something... THERE ARE SPOILERS HERE! I'm talking stuff like what the NEW BAD GUY BAD GUY BAD GUYS look like and what they are... I'm talking about a special thingee that a certain Ike Turner is gonna be wielding like a bad mutha on Father's Day.... So folks... Read on at your own... delightful.... risk.... MUhahhahahahahaha 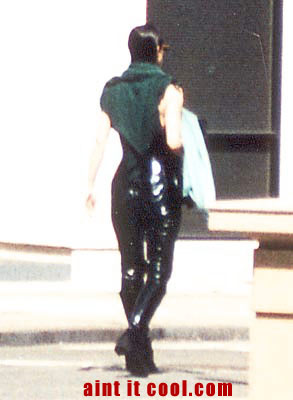 I thought of the perfect (most appropriate) spy name, and wish to be called... "BURLYMAN". Please credit these scoops to myself, Mrs. Burlyman, Little Burly Junior, and Friend of Burly. What follows are my notes from two days of watching the set...

We came across the staging area, (in the parking lot behind the billboards shown in a previous article) and saw several black Escalades, which are 4-door Cadillac pickup trucks. Lots of extra cars, all from GM. The license plates of the cars were green on white, and claimed to be from the state of "metropolitan".

There was a camera stuffed inside a newspaper box.

They were shooting in front of another tv repair shop. The phone booth in front had signs that say "city".

I have NOT seen any Ferraris or Porsches. In fact, the whole production seems to be sponsored by GM. Every car from the land of "metropolitan" was either a Pontiac, Oldsmobile, Chevy, or Cadillac. The only exceptions were the two BMW 7-series cars that were cut in half (blown up?) See attached photos. 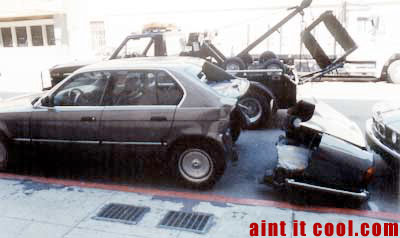 STUFF WE SAW THAT YOU HAVEN'T SEEN YET:

The white guys with silver dreadlocks and silver clothes were physical representations of computer viruses (virii), and looked magnificent in their flowing silver trench coats. Without the coats, they looked kinda silly, like scientologists from the planet of bad movies. 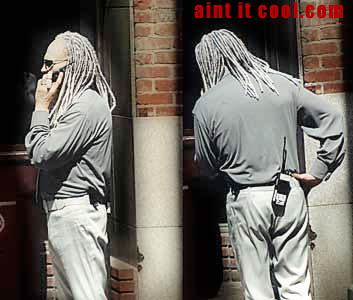 We were told it took 2 hours each day to get the virii into their makeup, and another two hours to get them out.

The car previously thought to be the Cadillac Evoq is actually the new 2002 Cadillac Catera, a 4-door sedan meant to compete with the BMW 3-series. There were about 7 or 8 of them on set, all identical silver cars. It is not Neo's car, and he apparently has nothing to do with it. Instead, it is the car driven by Trinity, with Morpheus riding shotgun while on a cell phone. There's an asian man in the left back seat (beige work shirt, brown trench coat, green back pack, glasses), and this is during a high speed chase through downtown streets, a parking garage, a tunnel, and under some overpasses. The "chasers" are the previously referenced virii, driving the black Escalades, with one virus hanging out of the sunroof, blasting away with a machine gun. (ALMOST had a photo of this -- woulda been so cool...) 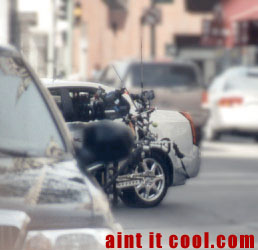 Someone helpful told me this story from earlier in the day: Carrie-Anne Moss' stunt double, being chased by the virii while driving the Catera, blasted out of a basement-level parking garage onto the street. When she did, the car was supposed to turn onto the street -- but during one take, the car didn't make the turn and hit the curb, actually tearing out the car's front wheels. There was fire, sparks, a whole lotta noise. Oops. Throw that car onto the scrap heap, and bring me another one, will ya? 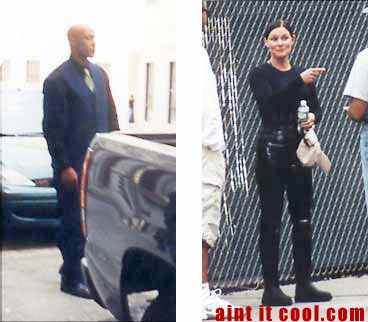 Another story from earlier today -- this from an unquestionably accurate source: These automotive pyrotechnics could have happened because the person in the driver's seat - Carrie-Anne Moss' stunt double, was not actually driving the car. The real driver was a stunt driver in the back seat of the car (!) Fish was riding shotgun. (Note of clarification - for some stunt takes, this special car was used. For others, regular cars were used.) 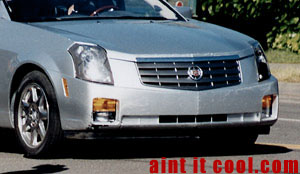 The Freeway in Alameda is indeed on an old airstrip, and looks to be about one mile long. It has one overpass, and one freeway sign. (Note from Mrs. Burlyman -- The freeway sign says "Wacker Drive - 1/2 mi, Pope Avenue - 1 3/4 mi".) They're creating more signs in a nearby warehouse. (Is Pope a reference to the first film's Director of Photography, whose last name is Pope?)

There's a parking lot of GM cars sitting at one end of the "freeway", just waiting to be used. It's like a portable traffic jam.

The working title of this film is apparently "Burlyman". (amusing note - they have a "mobile billboard" -- a truck with a billboard on the back, and it promotes a film called "Burlyman". The car chase goes right by, and the billboard might actually make it into the film as one of those window-washer type of Wachowski-jokes).

THE MOST IMPRESSIVE THING WE SAW

We saw a scene where the Catera swerves through the opposing traffic of a red-light, chased by the Escalades, and blocked by several police cars, which fishtailed to stop the Catera. All the cars converged on the intersection at the same time, and it was simply breathtaking to see the precision with which the scene was filmed. We watched 4 or 5 takes, and each time it seemed impossible for the cars to emerge unscathed -- but they just backed all the cars up and redid it until they were happy.

THE FUNNIEST THING WE SAW

For the takes of this scene that used the real actors, they didn't even use an actual Catera. Instead, they had "the Spare Parts Express". It was a full-size van, with everything behind the cab cut off, exposing the frame. On the frame, they placed a shell of a Catera, and stuck lights and cameras all around the thing. It looked pretty funny to see it swerving around through all the traffic. 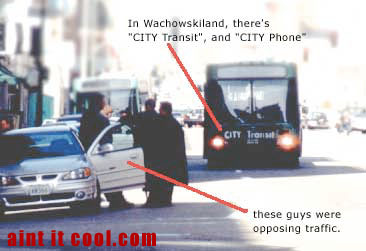 MOST FRUSTRATING PART OF THE EXPERIENCE

In attempting to shoot photos, we faced a worthy adversary. Between the crew guys with blue badges, the set guys with yellow badges, GM guys hoping to keep their future cars secret, and the many watchful policemen, everybody was watching out for (and actually chasing) people with cameras. Getting any photos at all was very difficult.

We saw some workers prepping a Catera to be shot up, by using a hammer and chisel to cut away at the middle of the roof.

There were two stunt doubles for Carrie-Anne Moss, and two for Fish. (Impressive note from Mrs. Burlyman - Fish's shoes were shiny purple alligator skin, and looked very, very expensive. In fact, Mrs. Burlyman marvels at how completely awe-inspiring his whole outfit -- nay, his very presence -- was. He embodies coolness.) Carrie-Anne Moss' doubles were much shorter than she was.

There is no mistaking Carrie-Anne Moss for anyone else. She has a very distinctive jawline, and if you ever see her on the street, you'll know it's her.

I spoke to a lady who was an extra as a passenger on a bus. She said the car in back of the bus was shot and blown up.

The chase that was filmed today included a huge explosion, I think. I was unfortunately about a mile away when I saw a very large cloud of black smoke over the filmed area. Never did confirm what this was.

We were told that the portions of the film(s?) shot in downtown Oakland would end up as about 25 minutes of total screentime.

There were a couple of actors dressed in grey "Brinks" -type uniforms.

COOLEST EVENT OF THE DAY: Being in the presence of both Wachowskis, Laurence Fishburne, AND Carrie-Anne Moss -- at the same time!! I really enjoyed watching them work, and seeing them all create, even if I was about 40 feet away.

COOLEST NEWS OF THE DAY: Someone I spoke to told me of an event earlier in the day, where Laurence Fishburne was wondering, "how should I carry my sword? Like this, or like that?"

OTHER COOLEST NEWS OF THE DAY: Someone I spoke to said "you will not see Keanu Reeves on the streets of Oakland at all. All of his scenes are filmed indoors."

FINAL NOTE FOR A ONE-PERSON AUDIENCE: To my dear Mrs. Burlywoman -- Carrie-Anne Moss may have a shiny ass, but I'm in love with yours. ;) 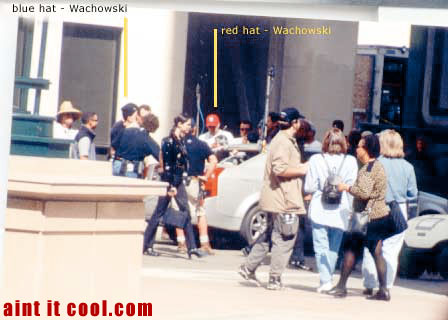 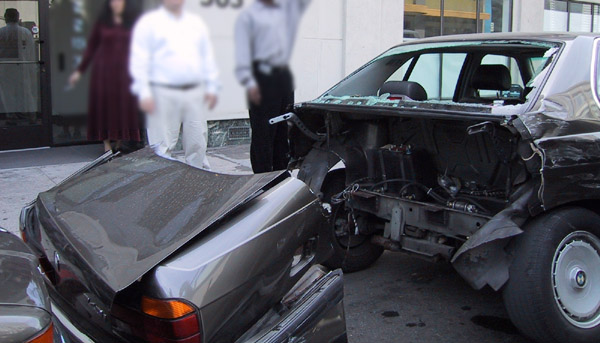