HOLD THE PRESSES!!! I just got off the phone with a spy in the Suit arena of Fox who gave me the lowdown on FROM HELL. Turns out that studio was shown monday night... as in two nights ago.... FROM HELL at its first screening. Things went very very well, and the studio is set to place FROM HELL on the last weekend of September, thereby giving it the entire month of October to play out... Mr Suit went on to tell me that the ending that the London Tabloids are freaking about... plays almost exactly like the end of the comic by Alan Moore and Eddie Campbell.... Now I don't know if you've read that brilliant comic series or not, but there is an alluding to an alternative possible ending to the Ripper tale... That things might be different slightly than the 'official record'. But it doesn't out and out say it in the book.... and apparently it didn't in the film as well. Mr Suit, a long time friend in the suits at Fox, went on to say that film played beautifully. And so far, this suit hasn't lied or deceived me. So we'll see.

All information below this point has been modified by the above.

Hey folks, Harry here... It seems that Loony Toon has managed to get Albert Hughes to give him a window for when FROM HELL will be coming out. Right now it is looking like it'll hit in either August or October. September is usually a pretty dead month in films, so there is no wonder they are straddling that month. However, there is something else I'd like to address... I'm getting a ton of emails from people in the UK informing me that there is a bit of an outrage in England about the rumor that the Hughes Brothers are going to let one of the 'Ripper victims' live. Well.... When I visited the set last year, they took me into this Carriage garage type thing on their White Chappel Set and showed me the bodies of the victims. 5 victims. Not only that but they were all in the state that you will see (If you dare) in any of the crime photos from the period. In complete morbid grossness. The Hughes brothers were obsessively committed to bringing realism to this story... even checking the weather reports from the "day's newspapers" and discovering that it wasn't FOGGY on those nights but MISTY. And the crime scenes... the locales where the heinous acts took place? Recreated in exacting detail. So, I don't know what version of the FROM HELL script the British tabloids got ahold of, but my copy doesn't let one of the 5 live. And I severly doubt that Albert or Allen would allow that to happen. Now, here's Loony Toon... 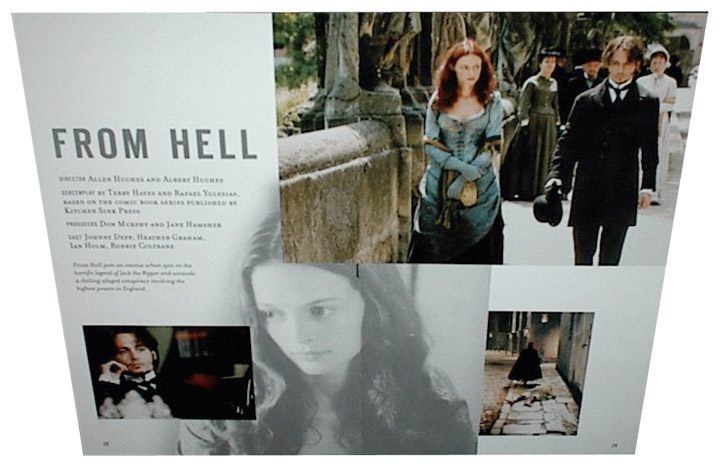 Loony Toon here with some interesting news from the world of those cool ass Hughes brothers and Alan Moore. I recieved an e-mail today from Mr. Albert Hughes stating that From Hell would be released in either August or October. Though I'd like to see it as soon as possible it might end up being a nice Halloween treat.

See ya on the flip side,

In Response to Celedhring in TALK BACK below. While they shot the movie in the Czech Republic and outside of Prague... They did not shoot any of the London street stuff in Prague, but rather on a set that I can only describe as being astounding. They rebuilt, from scratch in an empty field. A 1:1 scale reproduction of 1888 London WHITE CHAPEL district. Don't believe me? Well, the original artist, Eddie Campbell, from the Alan Moore written FROM HELL got to visit the set as well, and documented the whole thing here: At His Website