Reno checks in with the 1997 draft of TIME BANDITS 2... seriously

Hey folks, Harry here.... A looooong time ago, 2... 3... maybe even 4 years ago there were rumors about the progression of a possible TIME BANDITS sequel. Noone ever saw scripts, but suddenly people started passing away, making it harder and harder to tie in with... and according to all reports it was completely abandoned. WELL.... I'm a HUGE Time Bandit fan, and just cuz it'll never happen, doesn't mean I don't want to know what might've happened had the project of moved forward. So.... our faithful reporter Reno, has written in with the last known script to TIME BANDITS 2.... here you go..... 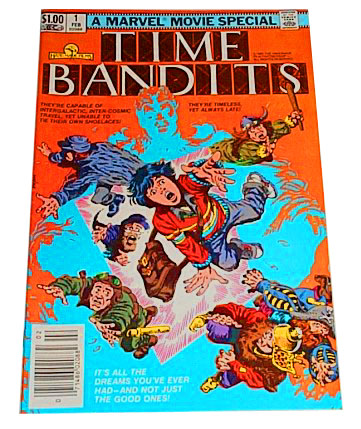 "Time Bandits" holds a special place in my heart. I saw it when I was 12 and it's one of those films that propelled me down the path towards being a movie buff. When at the shore the following summer, I saw watched the film about 6 more times in one week on HBO and my fate was sealed. I LOVED that film. Still do as a matter of fact. . .

However, when I heard a few years back that there was buzz about a possible sequel, I was anxious- both to see what Gilliam wanted to do but nervous that it wouldn't recapture the off kilter magic that so enchanted me as a kid. What I didn't know at the time and up to a few weeks ago, was that a script was written by Gilliam's sometime collaborator Charles McKeown (Brazil, Baron Munchausen) and got as far as at least two drafts (The version I have is dated September 97) before being abandoned.

The script features a mixture of original Time Bandits with some new blood. The story starts off with two dwarves- Mox and her friend Tangle, who work in the bueraracy that runs all of Creation, shredding files on animals as they become extinct. The two overhear a conversation between the Supreme Being and his Supreme Opposite Number as they plan to turn off creation at the end of the millenium. (A Note about the Supreme Opposite Number- he's a handpuppet that the Supreme Being talks to. The puppet talks in his own voice though. It's a bit reminiscent of Evan Dorkin's "Devil Puppet" strips.)

Mox decides she and Tangle need to hunt out her father Strutter, one of the original Time Bandits, to see if he has any suggestions on how to stop this from happening. They find the remains of the Time Bandits out of work and scrounging for a living. Strutter (Malcolm Dixon) is joined by Fidgit (Kenny Baker) and Og (Mike Edmonds) and Og's son Tubby (Was this the part that was rumored for Kenny Baker's son?). Wally (Jack Purvis) is despised by the group as he has moved into Upper Management and is in charge of the Accounting Department.

(Note: The characters of Randall and Vermin are mentioned in passing, but no indication is given as to where they are. In reality, David Rappaport, who played Randall, committed suicide in 1990. The IMDB gives no info on Tiny Ross, who played Vermin. Jack Purvis (Wally)'s part was written especially for him, knowing that he was paralyzed and in a wheel chair. Unfortunately, he passed away soon after this draft was completed.)

The group decide they need to see exactly how creation was saved from being shut off at the end of the first millenium in order to save it this time around. They go back to the Supreme Being's Treasury, steal a key from Wally and get the map that they used in the first film. Whilst rumaging about in the treasury, they accidenttly knock over the Ark of the Covenant (Which McKeown notes should look like the one in "Raiders"), summoning the guards. They find a some time portals (think of them laying in a stack like panes of glass) and they're off.

Their first stop is the bedroom of Polly, an 11 year old American girl, who spends more time in Internet chat rooms than with her working mother and stay at home, laid off dad.

With the Four Horsemen of the Apocalypse on their trail, the group and Polly set off through history on a trip similar to the first film. They enounter a cleaniness obssessed pirate captain, inadvertantly participate in Joan of Arc's capture and discover that Julius Ceaser's assasination was faked so he could get away from his shrewish wife Calpernia.

The script is fun and might have made an enjoyable movie except for the fact that it echoes the first film too closely. The bandits first stop after stealing the map is again a child's bedroom. The Pirate Captain and the Joan of Arc bit both feel similar to the Robin Hood and Napoleon segments of the original.

The Julius Ceaser section is fun, even if though I doubt there are many 11 year old products of the American school system who know who could correctly identify who Calpernia is. It also introduces a neat idea where the Bandits, travel back in time for just a day and encounter their earlier selves. When the two groups get seperated though, one expects to see the second group again, but it doesn't happen.

Finally the group discovers that they are the ones who saved Creation at the end of the first millenium and so they have to try again. Just before the switch is thrown, the real Supreme Being returns, having been delayed while measuring infinity. The other Supreme Being (the one with the hand puppet) was just his servant and had gone crazy trying to keep things going for his boss.

Polly is returned to her home, where her parents wake just in time for the New Yer's eve countdown. Downstairs, she meets her mother's new boss, a man who looks suspicioulsy like the real Supreme Being. . .

One theme McKeown seems to explore in the script is the parent-child relationship. Mox seems to be embarrased by her father, but they soon come to understand each other better. Polly seems to have the same problem with her parents and comes to a similar happy ending with them as well. (No exploding parental units this time!) Unfortunately, this is still a weak element in this draft and hopefully would have been strengthened had the project continued forward.

"Time Bandits II"'s biggest failing is that it doesn't feel like it fits in with the first one at some level. Gilliam explains that "Time Bandits" is part of a thematic trilogy about Dreamers, specifically the Dreamer as a youth. ("Brazil" is the dreamer at the middle of life and "Baron Muchausen" is the dreamer at old age.) There's no deeper theme to the sequel and perhaps it's for that reason that it just doesn't seem like a worthy successor to the first film. If McKeown had more time to devlop the parent/sibling aspect some more, maybe it would have worked better. (Or perhaps by making Polly the daughter of Kevin from the first film, there would be a stronger tie in- how would Kevin in maturity and stuck in the modern world recall his youthful adventures? What kind of parent would he be? Lots of possibilities there. . .)

But with Purvis' passing and other factors, "Time Bandits II" unfortunately joins the vast list of films that only are screened in the world of "What Might Have Been."