Quint talks with IT's Andy and Barbara Muschietti about the art of adaptation, killer clowns and casting kids!

Ahoy, squirts! Quint here. IT had a massive weekend and has become a real deal phenomenon. One of the main reasons people are taking so strongly to this Stephen King adaptation is the level of detail that director Andy Muschietti and the creative team behind the movie, including his sister and producer Barbara Muschietti, have jammed into the picture. The town of Derry feels real because every corner has history, every storefront has a story and every character within feels heightened.

I got the chance to talk with Andy and Barbara about the amount of detail that went into this adaptation and it's clear that they know their shit, but also know what will translate into a modern day adaptation of this material. They seemed to strike that perfect balance of respecting the material without being married to it.

In our all-too-brief chat below you'll find us covering as much ground as I could about getting the right kids for the movie, the reason for not going as reference-heavy as the source material and the subtext of It's influence on this small Maine town and why that was important to this picture (and, most likely, crucial to the pending sequel). Hope you enjoy! 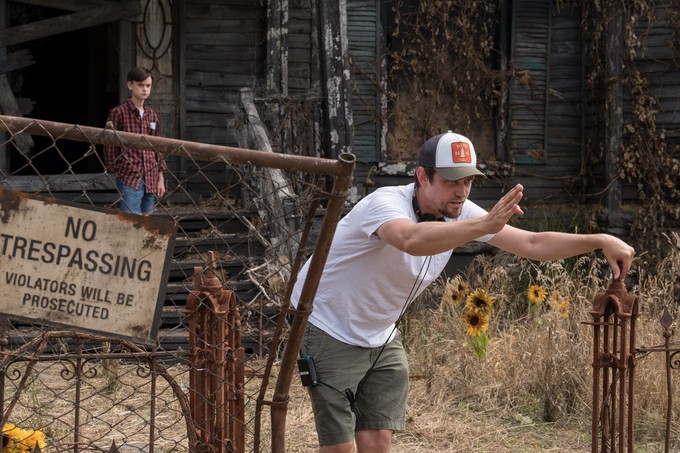 Barbara Muschietti: Hi, Eric. How are you?

Quint: I'm fine. I'm sure you guys are doing well. Everybody's loving your movie! I saw it with a crowd that went absolutely bananas when “Chapter One” popped up at the end.

Andy Muschietti: Yeah, it's one of those moments that still gets me. Seeing the movie 300 times you get used to everything, but that end still gets me every time.

Quint: I don't know if you remember but I visited you guys on the set. I was one of the many geeky types that was there when you shot Pennywise coming out of the screen.

Andy Muschietti: That was a weird scene to share because it was all bluescreen and it was only Pennywise doing crazy shit. Every take was something different. On one he played it like a fucking monkey looking for a banana.

Quint: Yep! And that didn't make the movie so I have a Pennywise scene that nobody else got to see in my head!

Quint: I read it again recently as an adult and related to it in a completely different way. I wrote a big story about it, actually...

Andy Muschietti: I want to read that!

Quint: You should! It'll be there whenever you have a moment to relax after this release. But as a big fan of the book I felt you guys succeeded with this adaptation in two major ways. The biggest was the focus in getting the Losers Club right and building the story so much on their characters. A lot of filmmakers could have gotten caught up in the Pennywise part of the story because that's the flashy fun stuff, but what I loved so much about the book was that these kids felt like my friends. That's the same feeling I got watching the movie. I was wondering if you both could talk a little about how you were able to execute that and translate it so well.

Andy Muschietti: For me it was essential to bring that aspect to the movie. I read the book, too, when I was probably 14 or 15 and their story resonated so much with my own life. A lot of situations depicted there are relevant to what is going on in your life; first love and infatuations and the first contacts with violent events and bullying. The Losers story has been in my heart ever since. For me it was very important to get that right.

Basically the process of finding these kids was, for me, not only about finding talented kids that had enough skill to do the role, but also to bring the role to life I wanted a shared DNA with the characters. There are Losers that are very, very particular. Well, they're all particular, but some of them have specifically colorful personalities, like Richie Tozier. I didn't want to make a kid act like Richie Tozier, I was looking for Richie Tozier. That was my ambition. Finn (Wolfhard) has Richie built into him. It comes so easily to Finn because he is part Richie in the sense that he will speak with verbal diarrhea, saying the funniest things. His jokes in real life are smarter than Richie's, but he has that built in.

Barbara Muschietti: The first step was finding the kids with the right DNA, like Andy said. The second step was we put them in camp, basically... an '80s childhood camp. This was not about '80s music or TV references or film references, it was more about taking their cell phones away, taking them to a quarry to swim, getting them riding on bikes and basically being together for 8-10 hours a day with no smart devices. Just themselves. They did trust exercises. We gave them time to just talk shit and not be chronically and constantly influenced by stuff that happens in our iPhone. 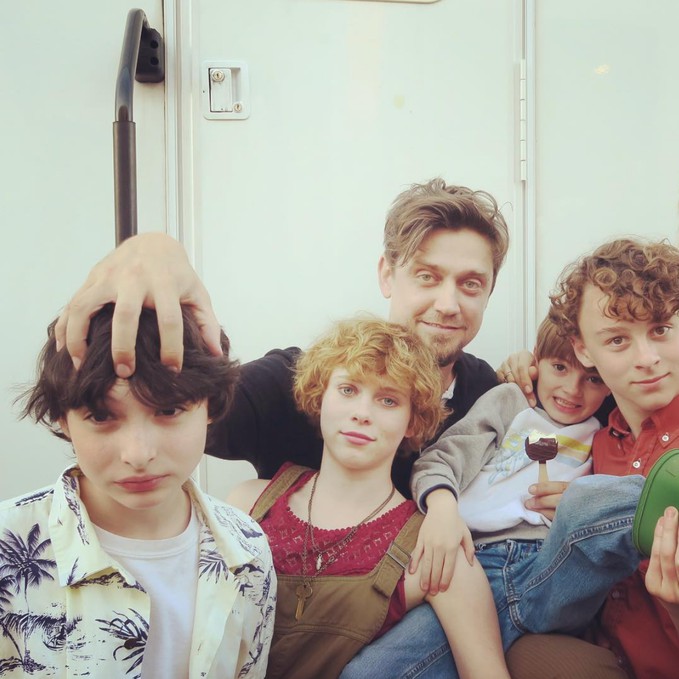 Quint: I like how you guys handled the reference stuff. Most of it is in the background, but the stuff in the foreground is always rooted in character, like how New Kids on the Block strengthens the relationship between Bev and Ben.

Andy Muschietti: (laughs) Yeah, that really pays off. All those scenes involving New Kids on the Block have a repercussion in their relationship. She teases him at the beginning. She's being compassionate with him, but also sort of teasing.

Quint: I think I only have a couple more minutes with you guys but I wanted to get in a couple more things. One of the interesting things King did with the original novel was he used Its ability as a glamour or shapeshifter to embody the fears of his victims. In the book he used a lot of pop culture references from the '50s. The Universal Monsters were what the kids of that era feared so It appeared as them. You don't go in that direction with this movie. Was there ever an impulse to do that and bring some '80s monsters, like Freddy Krueger, into the mix or did you feel from the start that would be distracting?

Andy Muschietti: Obviously we considered that for a bit, but I wasn't too interested in bringing Freddy Krueger into the mix. I love the story and I love how Stephen King basically makes a portrait of childhood in the '50s. He's very genuine when he brings all the Universal Monsters to the repertoire of incarnation because that's what kids were afraid of. It would be a natural path to try to recreate that in the '80s, but I really wasn't too crazy about bringing stuff like Freddy Krueger into the story. I thought it was a bit too meta with New Line involved in the film. It's distracting and it didn't feel right, for some reason.

I wanted to bring fears that were a little more layered and related to childhood trauma and more surprising in general. I think that Stephen King was open to that. When he saw the film I basically wrote a letter to him asking him for forgiveness for having taken so many licenses, especially with the many different incarnations of Pennywise. He said “Don't worry about it. All the changes are great!” I think he understands adaptations are a different animal. Of course it could go well and it could go bad, but I think in this case he really enjoyed it.

Quint: To wrap up I wanted to ask you guys about one of my favorite aspects of the book that you seem to be setting up. There's a more than symbiotic relationship between It and the town of Derry. It is Derry and Derry is It. You guys show how It has influenced the worst in the townspeople in this movie and when I was on the set you said your goal for the sequel was make it pretty flashback heavy, bringing these kids back and maybe even showing the burning of The Black Spot. Is that still the direction you guys are going with?

Andy Muschietti: Yeah. You said it at the beginning... when you read It as an adult you had a bit of new interpretation of the book. That happened to me, too. When I read the book again there was a deeper message there that you only understand as an adult. Ultimately the story itself is a parable about the end of childhood and the death of the world of imagination and magic. Everything that lays beyond childhood, adulthood, is the killer of that world of belief and imagination. That's why the adults are the extension of the evil.

That's only an interpretation that an adult can understand because you are an adult and you feel that there was that world of belief in things that didn't exist but you don't have it anymore. There comes a point in your growing up where that just disappears. That's the dichotomy that Stephen King talks about. Adults represent the death of the world. That's why Pennywise calls himself the eater of worlds; not because he eats planets in his own macroverse, but because he eats worlds of faith and the magic of childhood.

So, yeah. That was an idea that I wanted to explore and it also helped to keep the tension alive when Pennywise was not present. Even if this is an underlying message or a subtext, I think people feel the palpable threat of the town itself and the adults feel like an extension of Pennywise or It. 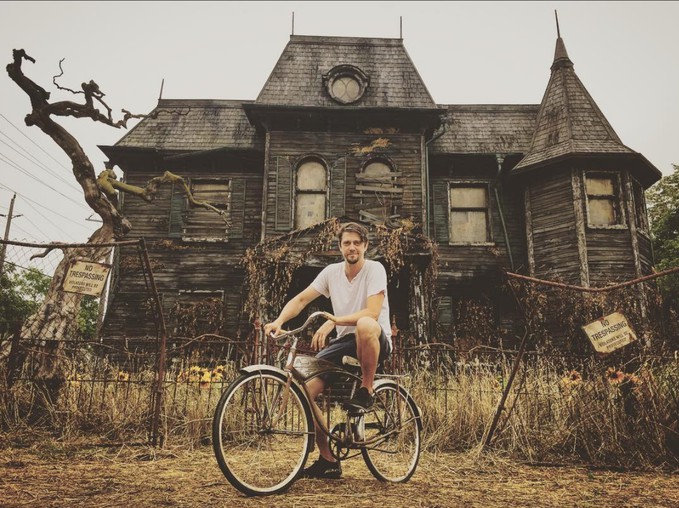 These two did a bang-up job with this and I can't wait to see how they attack the sequel, which will be a bit of a tougher road, but also has more room to expand upon the darker aspects of It and Its influence throughout the years.

Lots of rich stuff to mine and I trust this team to do it justice.