Ahoy, squirts! Quint here with yet more IT interviews. Tired of 'em yet? Hope not because we still got one more to go after this!

This on-set interview was done with Jack Grazer, who plays Eddie Kaspbrak, and Chosen Jacobs, who plays Mike Hanlon. Both kids were interesting interviews, which isn't always the case with young actors. Jacobs was very thoughtful with his answers, taking a deep look into the root of his character, and Grazer was a little bundle of energy that totally won over the room with his very first answer (you'll see).

Of all the kids, Grazer is probably the least like the character as King wrote it. Eddie's a bit of a wimp in the book and Grazer's interpretation is a bit more forceful. He's still a little guy, but he talks a mile a minute, like a '30s gangster, and was a much bigger personality than I think any of the visiting geek press expected.

Conversation goes from auditioning to bonding exercises to the excessive niceness of Bill Skarsgard despite being dressed up as a scary clown with a saliva problem. You'll see what I'm talking about shortly. Enjoy! 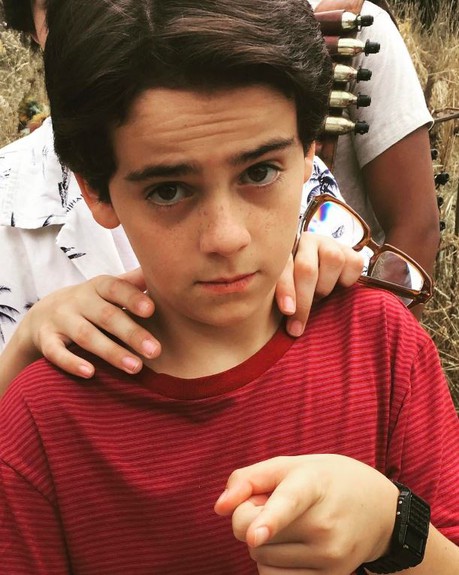 Question: So, talk a little bit about getting the roles. What was the audition process like for you guys? Did you have to go in a bunch of times?

Jack Grazer: No, just kidding. Yeah, so I went back for the chemistry read as Eddie and I read with the guys and I guess they liked what they saw.

Chosen Jacobs: For me, I only auditioned once for this role. I did it on tape and I guess they picked me.

Question: We've heard you guys did some bonding exercises. What was that whole process like especially since it's so important to the story that the seven of you have to have this bond. Did that help a lot?

Chosen Jacobs: I'd say it did. It was cool, the way they did it. This is my first major film with a major company and it's cool because Mr. Ben, our acting coach, made sure we bonded before we even got to shooting. We knew each other's names, favorite colors and so on and so forth. I think it just made the set and our acting even more compatible because we weren't just acting with strangers. We knew each others weaknesses and each other's strengths. It was very cool.

Jack Grazer: Yeah, we did a bunch of exercises before we started shooting. We did one where we walked in on each other and we were all dead and we were like “Oh my God!” Everybody was pretending that it was real. “Our friends are dead!” It (worked) because we're all best friends. We're life-long friends now in reality and in the movie.

Actually, we're shooting a scene right now, and I'm not going to give to much away, where Stanley is breaking down and we're all huddling around, crying. It's an amazingly powerful scene and it's real. We all burst out crying because the friendship is real.

Question: We were told that you got to play outside “like '80s kids.” What does that mean?

Question: Spoiler-alert: We all did that.

Chosen Jacobs: We bike a lot and that can be sometimes uncomfortable, but I don't know how uncomfortable it is with shorts on, so I feel good. Your legs are touching the seat... I feel bad for those guys.

Question: Can you talk a little bit about the first time you saw Bill as Pennywise?

Jack Grazer: Actually, the first time I ever saw him was a scene where he was up close in my face, strangling me. I didn't really get the memo before that happened. Andy, the director, is a lot about in the moment. Like, “Okay, spontaneous. Let's figure this out. Drool on him, punch him, whatever you need to do.” So, that's what happened. I got a lot of drool on me. The drool is probably one of the most important parts...

Chosen Jacobs: Yeah, how does he do that?!?

Jack Grazer: Andy has a thing with spit. I don't know what his interest is in spit, but at wrap every day he yells, “And... spit!”

[The publicist makes sure we know that the prosthetic teeth that Bill Skarsgard wears increases the amount of natural saliva, which was a happy accident and the production now uses it to make Pennywise even more creepy.]

Jack Grazer: Yeah, Bill is great. He's a great actor. He really gets you in the moment. Before you start the take he goes (screeches) and does a little clown laugh and runs around. He's crazy. It's awesome. He gets you there before you even start the scene. It's great.

Chosen Jacobs: The first time I saw him was actually the first time (Jack) saw him. I wasn't working in the scene that day, but I was there. They were doing this take, he was doing his crazy thing, choking, spitting... all this craziness to Jack and then afterwards he's like (exhausted) “Andy, it's really hot in here. I can't see.” It's funny because you see him as Pennywise, which is really scary and just hits you in the wrong way and then afterwards he's just really chill. He walks around with his makeup on and says “Hey, guys. How you doin'?”

Jack Grazer: He's a sweetheart, a total sweetheart. When he was supposed to push me up against a cabinet in a scene he was like “Can we have a pillow, please, for Jack? I don't want to hit his head.” He was great about it.

Question: Were you guys familiar with either the book or the mini-series when you got the part?

Jack Grazer: Yeah. I mean, I'd heard of it and I knew it was a really iconic book and mini-series, but I never really watched it. When I was auditioning I watched it.

Question: How are your interpretations of the characters different than the way it was portrayed in the show?

Chosen Jacobs: For my character...

Chosen Jacobs: Yes, I'm more involved in this film. Mike Hanlon was more involved in the book, but he's less involved in the (mini-series). My character is varied. There are certain aspects that do change his personality, but I feel like in this film the character is more independent because it's a more recent time. There's still issues, but he's still an '80s kid, so he has some pizzazz about himself. I feel like my character is sweet. He really cares. He's a genuine person. He'll do for you if you do for him. He doesn't have many friends growing up isolated, black in the '80s in a primarily caucasian environment.

But he's got a sweetness about him and he really cares about this friendship because it means the world to him. I think that's why he'd go and fight a clown. 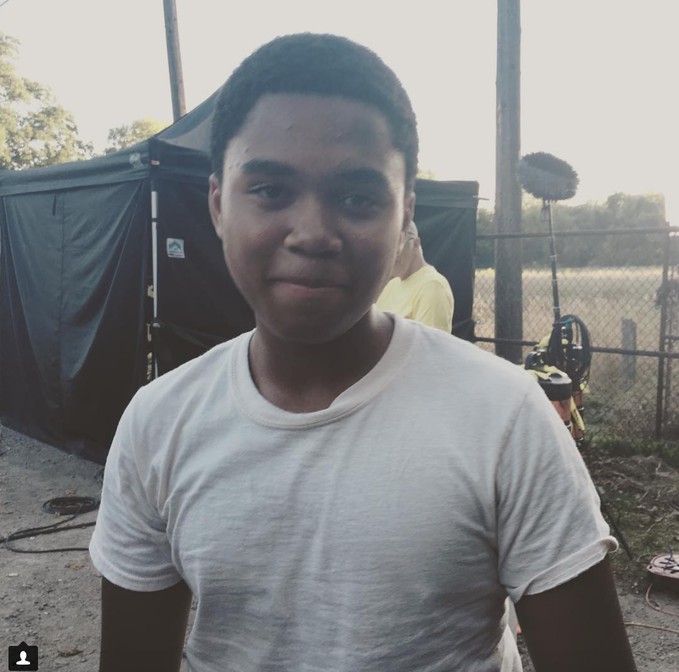 Question: The story has some really intense, gory scenes. I'm curious about what it's like filming those parts of the movie. Is it fun for you? Is it weird?

Jack Grazer: It's amazing. It's amazing. The prosthetics team on this movie is amazing. Kudos to them. This isn't a Quentin Tarantino movie or anything. It's not that crazy...

Jack Grazer: (makes a mayyyyybeeee face, causing everyone to laugh again) But yeah, there's some gore and it's amazing. All the special effects in this film are incredible.

Chosen Jacobs: I feel like this film would be great without any (of the kids). Just to see this horrible character... the prosthetics and makeup department just really tear it up. Everything looks real! Everything is so real, whether it's a dead body or a monster's face or a broken arm... You don't have to act in this film. It's just scary.

Question: Have you guys filmed anything so far that was really, really difficult?

Question: Either. Just something that stands out to you as a memorable moment.

Question: You had to actually do it?

Jack Grazer: Yeah, I did. There were shots where there was a stunt double or something, but I did fall through a table, but it was great. That was great. What a rush!

Question: You have a stunt double, man. That's awesome!

Jack Grazer: We all have stunt doubles. Mine is really cool. I haven't really talked to him all that much, but I talked to him a little and he's cool.

Question: How old is he?

Question: Are you ever like “I want to do my own stunts?”

Question: You're playing children in the '80s when many of us actually were children. How was it acting in a time when there is no internet or as many video games as there are now...

Chosen Jacobs: Wasn't there a scene with Stanley and he said “Email me something?”

Jack Grazer: Oh, yeah! We did an improv thing and Finn, who plays Richie, says “How do you expect me to give you this?” and Wyatte says “Have you ever heard of email? I mean... what's email?”

Question: The story is a right of passage. The characters start as children and end up transitioning to adulthood by the end. Do you guys feel the same as young men going through this experience?

Chosen Jacobs: This has been my favorite summer ever. It's the best summer of my life. I got to shoot a film. It's crazy. I've said this before and I really, really honestly believe it, but Stephen King has a great way of making horror (stories) relatable. Pennywise is scary, but this story really is about our friendship and without Pennywise we never would have come together. Pennywise is really just symbolism for all the hard things that happen in life that brings people together.

Of course we changed. People became more mature, some people break out of their shells, some retract into themselves because it's scary, but I think this horror film is more than just gore. It's a coming of age movie.

Jack Grazer: Definitely. We start off this movie as losers. We're The Losers Club, right? As we evolve in this movie we are facing things that not many people see and we're all fighting as a team. We're together and bonding. Like I said earlier, “Small but mighty!” That's our whole group. That's what we are. It's a triumph. We break through in the end. We're The Winners Club, I guess. 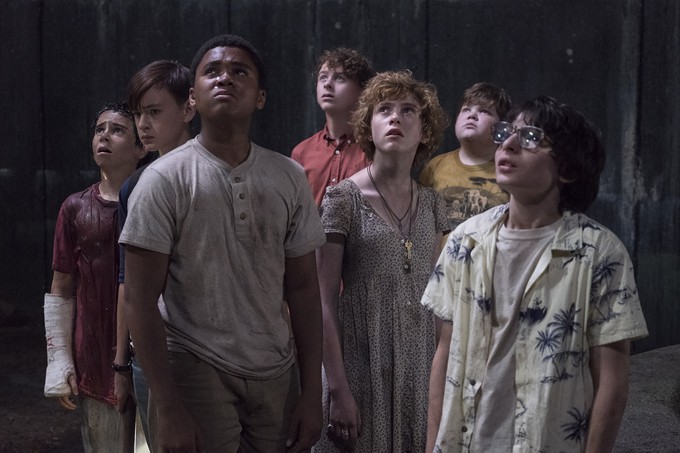 That's another one down. Go read all my other IT coverage. It's all good, I promise!