Harry says Luc Besson's VALERIAN & THE CITY OF A 1000 PLANETS will make you put on Bowie & Dream! 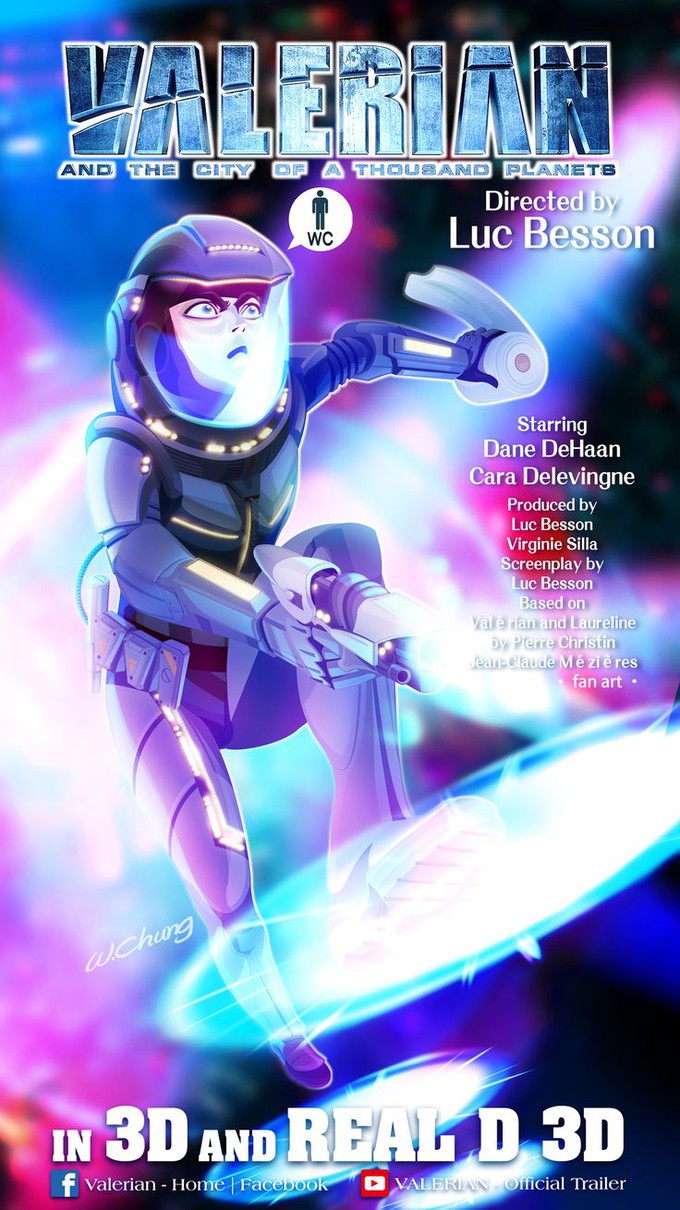 Going into VALERIAN & THE CITY OF A THOUSAND PLANETS – you don’t need to know much.  You need to know that it predates STAR WARS, but not STAR TREK which debuted the year before or DOCTOR WHO which began 4 years before, but it does come way after John Carter, Flash Gordon and Buck Rogers – and it’s more cut from their worlds, only not.   This is a rollicking adventure.   You should know that it isn’t all about Valerian (Dane Dehaan), in fact if I have a disappointment, it’s that the title isn’t VALERIAN & LAURELINE: THE CITY OF A THOUSAND PLANETS.

If you know the source material, you know that Valerian, while being heroic as hell, is… a bit of a dick.   And the character that you’re supposed to fall in love with is LAURELINE.   At least, that’s how it’s worked for anyone that I’ve talked to about these characters.   Usually European literate comic geeks – and there aren’t a terrible ton of us in these parts.   Valerian is a permanently half cocked & ready to fire kind of guy – and Laureline is his latest partner in a long list of partners that he’s gone gallivanting across space and time with.

As we meet the characters in Luc Besson’s masterpiece of Euro-Sci-Fi, they’re relaxing in their “holo-deck” beach vacation, where you see Valerian trying to push himself upon Cara Delevingne’s Laureline.  We can tell she has feelings for him, but she’s got a job to do and she’s a no nonsense kinda badass.  But more than that, Laureline is that space partner that may get in distress, and sure Valerian will come a running to save her every time.   But the truth is, Valerian is a bit of a clusterfuck himself, and he’ll need plenty of saving and Laureline will be there for him.   BUT – the dynamic here is more like first season Sam & Diane on CHEERS.   Sam thinks he can have any woman, and Diane intends to show him otherwise – but these are two people that are destined to go through Hell and maybe – someday in the even more distant future, they’ll work it out, but at least in this film.   I’m with Laureline.   Valerian has a ways to go.   He learns valuable lessons here, but whether or not Luc Besson gets to make a series of these things, there’s a series of comics that sing the song of Valerian and Laureline – and if this movie hooks you… SEEK THEM OUT.   Watch the Anime.   Jump in, the water is groovy.

Get rid of STAR WARS, STAR TREK, ALIENS, DOCTOR WHO and all those others and let yourself discover something you haven’t seen before.   I promise you, you’ve never seen science fiction like this.

It all begins with David Bowie’s SPACE ODDITY – and the montage of advancement of Earthkind is the shit of tears.   I love it so much and I love that I can play SPACE ODDITY and while I get occasional glimpses of Chris Hadfield in my mind, I am currently seeing the opening images of this movie. 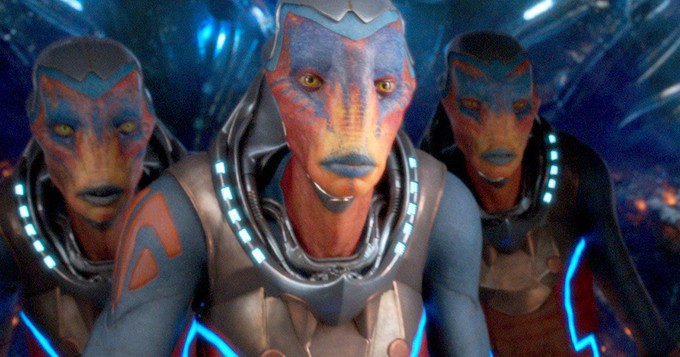 For those of you that love STAR TREK and DOCTOR WHO – and defend it against STAR WARS fans that dismiss them.   I get that.   I love STAR WARS through and through.  If you’ve been reading along with me the past 21 years – you’ve seen that love which at times can border upon madness from time to time, but love is not logic.  STAR WARS is a long time ago in a galaxy far far away – and for many they don’t like sci fi in the past – they want a hopeful vision of tomorrow – where we can see what humanity coming together and moving forward together could be.

VALERIAN is going to take you 700 years into tomorrow.  How we get there, if you watch SPACE X, Chinese, Indian, Japanese, Russian, NASA and European Space Agency launches and progress with awe and wonder and a fair dose of hope…  You’ll probably need multiple theatrical experiences with VALERIAN. 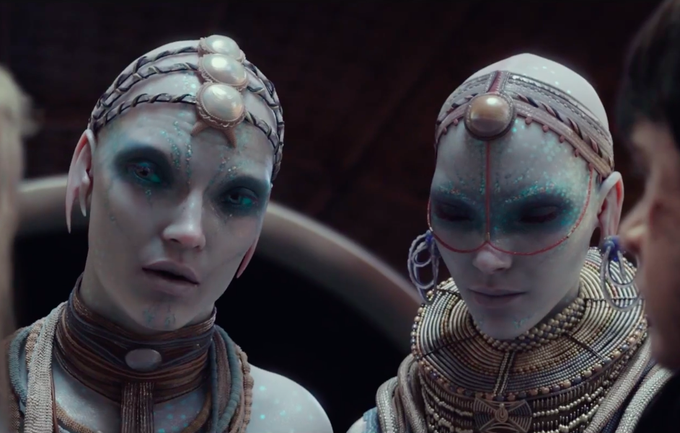 When you join Valerian and Laureline on Alpha – and you believe in the future of a united humanity – it’s hard not to just drool from the corners of your mouth while psychically screaming “FUCKING YES!!!!!”

Remember the coolest thing about STAR TREK BEYOND?  The YORKTOWN.   Right there big and beautiful…  created in the visual language of STAR TREK is that astonishing concept of essentially the building of a small world – where beings from all over could come, raise families and live in peace.

ALPHA is like the YORKTOWN with hundreds more years of races from across the galaxy or the universe – bringing pieces of their worlds to add to ours.   It’s Space Alexandria – the base for the collective learning of the future.  There’s sounds from our time there and sounds you haven’t heard before.   Like our best cities that have communities of peoples living together and honoring their customs.  You see that, but with aliens that go well beyond head appliances and masks – and they’re wondrous.  Like STAR WARS – the display of awesome ‘just imagine’ beings is killer.  There’s wizardry at place here that makes you want to bend space and time and go.

Like that STAR WARS HOTEL that’s going up in Florida…  but so much more than we can currently alter our reality.   The infinite variety of beings in this film guarantees viewings into significant double digits.   I will tear through a 3D Blu Ray going frame by frame in my future.   This film is just a new metric to judge these kinds of films.   I love AVATAR – because it again showed us in a far future, of course we’re assholes still, dammit.    And we’ve got assholes of the human variety here – and the aliens – well they’re doing their best. 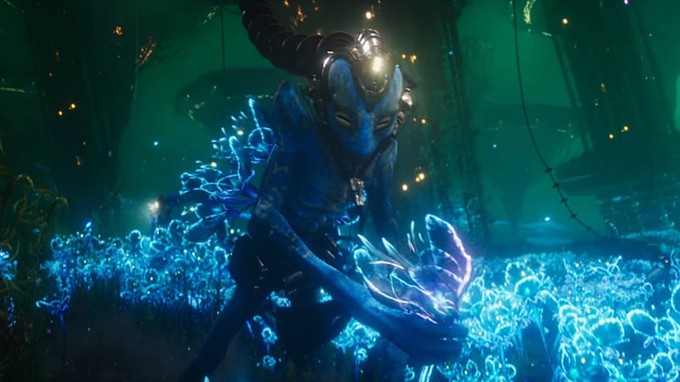 Fave alien is BUBBLES.   That’s Rihanna’s character – and she’s spectacular in this film.  She’s a special dancer in Ethan Hawke’s Bordello/Strip Club?  Hawke’s fine – he’s outrageous and wild, and that’s fine.   Look right on past him though, cuz when Valerian sits down, we’re going to get a treat like we’ve never seen – and that’s just the opening for her character.  She’s gonna help Valerian on a mission to save Laureline, who is in far more trouble than she even realizes.

Rihanna is just a part of this character, but you’re going to fall madly in love with her.   In some ways her character reminds me of a character in KRULL that I won’t discuss right now.   But in her native alien form, she’s just magically wow.  We’re at that point where the weirdest things that our greatest artists can design can be brought to life with so much nuance and character that it is just on honor to watch it live for you.

Then there’s the Doghan Daguis – they’re the information peddlers of the story, going from character to character shaking them down for things of value and they’re awesome.  Once you learn how they work and the amount of fun personality these 3 elephant trunked aliens have…  it’s just snuck up on ya.

I had totally forgot that Rutger Hauer was in this – and when he shows up at the beginning – I was swooning.  He’s a fave character actor for me – and I love when he pops up.

The main thing I want to impress upon you is to give something new a chance.  And by that – let go of your preconceptions.   This is nothing like FIFTH ELEMENT.  That’s ancient history.  Though you may see his Cab!!!!  You’ve got plenty of time to decide how much you like or don’t like characters.  But one viewing…  lol.  There’s so much going on, the first time you’re watching, you don’t quite know where to look.   You’re meeting characters that you don’t know and that don’t fully know each other yet and you’re joining them on the first mission that you’ve seen them go on, to a place you’ve never been, to do something you don’t know a fuck about, but by the end…  it’s kinda fucking James Bond but not dealing with this slimy mud ball we call home.

If you take your kids to this – they’re going to walk out with saucer eyes, dazed and opened wider than you’ve seen them.   They’re going to have a zillion questions.   And you’ll love learning all the answers together.

Luc Besson has knocked this film out of the park – he had the help of WETA, ILM, RODEO FX and quite a few others.  I LOVE EVERY SINGLE SHOT OF THE 2,355 VFX shots shot – and it is a wallop upside the head of awesome!   I mean.  I can’t wait to see it again this Wednesday – I think I’ve only seen about 10% of what I’m going to love about VALERIAN & THE CITY OF A THOUSAND PLANETS.   That’s not because I was distracted, but this is a film with a lot going on.  On first view, I’m locked on the main characters – or distracted by the amazing things on screen with them – and it pulls your eye from the actors performance.  It’s why sometimes we like movies more showing after showing.    A fave film like KING KONG (1933) – or Romero’s NIGHT OF THE LIVING DEAD, I watched that last night and I was really concentrating on every word from the Radio and the TV – and love that dialogue intently.

For me, when people say they want something different or new – and those people love science fiction…  HERE YOU GO!  Luc Besson is giving you a heaping helping of wow.  He’s given us a different future to strive for – and it looks damn groovy to me!

I may review this one twice, second review with spoilers.   But I’ll be writing up DUNKIRK tomorrow night.  Haven’t seen that yet.  But I’m down for a good film that reminds people that THE FUCKING NAZIS WERE THE ASSHOLES OF ASSHOLES.   Giggle.

Jesus, you’re not ready for VALERIAN, I wasn’t – and I knew the source material.   This is something spectacular!  Take the elderly.   Take the young.    Go in droves or by yourself. But dare to imagine something more than just a day like today and yesterday.   We have so far to rise. It's a grand future if we dare to reach for it. 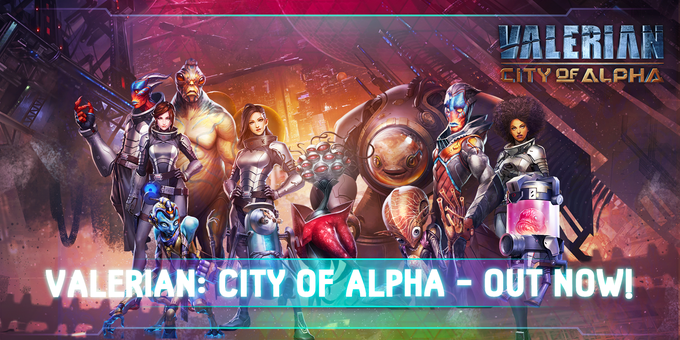