Quint talks with Gore Verbinski about his hands-on approach to the CURE FOR WELLNESS Blu-Ray release!

Ahoy, squirts! Quint here. Gore Verbinski's A Cure For Wellness is one of my favorite movies of 2017. I have a soft spot for weird movies with superb production design on display. There's something about that combination of A-list craft and B-movie story that just hits me dead center and has since I saw Alien as a way too young little dude.

I was able to chat a little with director Gore Verbinski and star Dane DeHaan before its theatrical release (you can read that here if you missed it) and I guess that went well enough that Verbinski agreed to talk to me again for the home video release, which hit shelves this very day.

Verbinski was hands on with this release and talks to me quite a bit about why he wanted to have a big say in stuff like menu design and bonus content for this release. We also talk a bit about his cinematic technique, use of reflection imagery and why he embraced the gothic second half with as much panache as the classier mystery first half. And we also talk about how much Edgar Wright rocks. You know, the usual kind of chat. 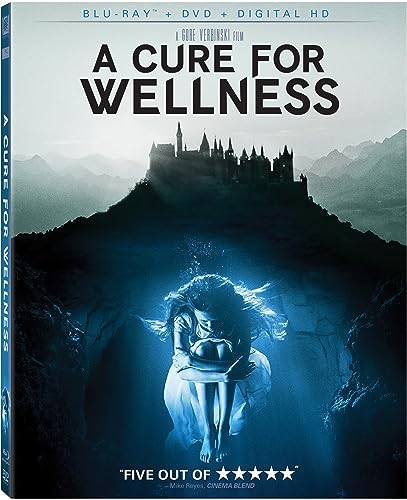 Gore Verbinski: How was it?

Quint: It's so good.

Quint: And he's firing on all cylinders with this one. I think you in particular will appreciate the precision that executes in this movie. It's kind of a musical without big song and dance numbers. Whether it's a car chase or just a guy walking to a coffee shop, Edgar shoots it like a heavily choreographed musical. It's super fun.

Gore Verbinski: I look forward to seeing it.

Quint: So, you always take a very cinematic approach to your films. The photography, production design, sound design... it's all orchestrated to immerse an audience into a world. It's been true for a while now, but especially these days people watch movies at home, not in a theater. Even the biggest superhero movies will end up ultimately living on someone's TV at home. Knowing that, does that change the way that you approach a film or do you always make it for the theatrical experience?

Gore Verbinski: It's interesting. What's different about this movie than any other movie I've made is that I shot it in 1.78. It was composed on the set in native 16x9. Over the years I was frustrated seeing a 2.40 movie or 1.85 movie (reframed to) 16x9 or even 4x3 on some airlines, so I just reverse engineered the thing from the outset and said I'm going to use the high def format, not in terms of the resolution, but the aspect ratio, from the beginning.

So, yes. I guess I knew from the very beginning that ultimately this was were it was going to live. It's nice to see people catching up with the movie on Blu-Ray and streaming. It was not a subconscious choice. It's really important to me that the film maintain the same unease and tension that it had theatrically for the whole home video release, so I was really heavily involved in little things, like the menus. You hit this production checklist that you have to be there for, like chasing the bitrate and protecting the sound and color while trying to provide some meaningful extra content that's not just a bunch of stuff.

Quint: I can't tell you how important a little thing like quality checking menus is. Over the last couple of years I've been introducing my nephews to a bunch of my favorite movies and it seems like one out of every three ruins a big part of the movie, if not the end, in the menu screen. It's gotten to the point where they don't even want to be in the room until I hit the play button. I haven't seen your menus in motion yet, but they did send me a lot of screenshots. It seems like your aim was to keep a lot of the mystery and tone intact. 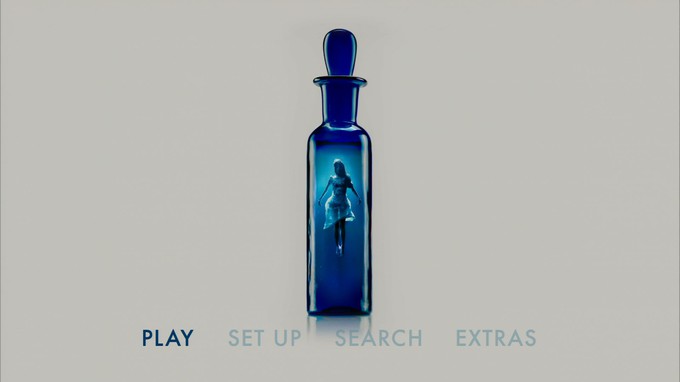 Gore Verbinski: They're parentheticals. You're sort of bracketing that experience. I'd love it if they never had anything other than the movie on a disc, but once you start needing menus and things like that I just want to make that experience complimentary to the film.

We have one deleted sequence. Rather than doing “here's a shot that was cut out of here and here's a shot that was cut out of there” I wanted to not just share some ingredients, but bake a little souffle for our fans. We put together some of the stuff that I always liked that didn't make it into the movie and created one sequence that Lance, my editor, and I spent quite a lot of time with. There's a lot of love, a lot of time and effort put in. For people who enjoy the movie, I think it's respectful. 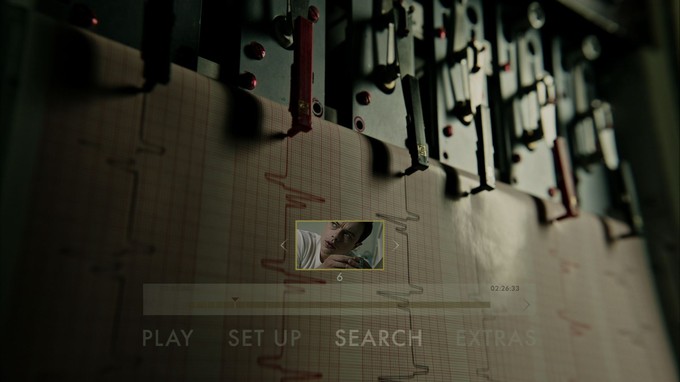 Quint: Fans can definitely tell when a studio or filmmaker halfass a home video release. You know it when you see the picture quality or a spate of boring production featurettes that don't actually tell you anything about how the movie was made. Again, I haven't seen the Blu for this yet, but it sounds like you didn't want to pack it with filler material.

Gore Verbinski: It's minimal. It's minimal because I wanted to put as much of the bitrate to the movie itself. That's the most important thing. Quite often you get these Blu-Rays that are cluttered and you really take a hit on the bitrate for the film itself the more you add to the disc. There's always a balancing act.

Quint: Something that really stuck with me from the movie was your use of reflection. That imagery is all over the movie... the mountains on the train windows, the glassy reflection on the eye of the stuffed deer in the office, for instance. Was there anything specific you were going for with that imagery? I got an Alice Through the Looking Glass vibe, but I could be reading that into your intent.

Gore Verbinski: Yeah, it's about leaving our world. You get into dimensions and dualities. Where's he from? Where's he going to? I think it's about exploring that sense that there's more than one way of looking at something. There's another view, another reality that you're slipping into. They're kind of like portals, really. He gets to that steam room and he's transitioning from one world to another, really. I think that imagery has a kind of subconscious effect.

Quint: I also got the sense of growing paranoia with those shots, like someone is watching you, especially with that shot of the office reflected on the stuffed deer's eye.

Gore Verbinski: Yeah, there's a sense of intention. When your narrative itself is enigmatic you have to see the intention in that. Why that shot of the deer? Well, in the scene a deer runs out and hits the car. It's how you're priming and paying off so that things don't just feel random. You get the sense that you're getting a whiff of something before you encounter it.

The end of this movie is very gothic in its narrative, so it's important at the beginning of the film, like with her voice, that you get some sense that you're in a sort of reverse Sleeping Beauty. While he's being put to sleep she's awakening. That's really the journey. I think sensing intention, almost like a cancer... a form of something inevitable is going to occur.

Quint: Speaking of the gothic stuff at the end, I have to say that I love that you brought the same level of craft to the crazier B-movie elements to this story that you did to the “more respectable” mystery first half. I think a lot of directors these days would have shied away from the gothic stuff. Maybe not Guillermo del Toro, but most directors might have been scared of embracing that the way that you did. 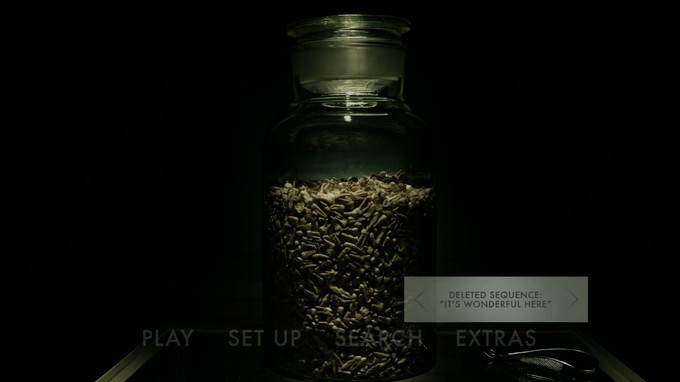 Gore Verbinski: It's just a love letter to that Lovecraftian tonality. Again, there's that sense of crossing a threshold into the unexplainable. You have to take bold strokes with that. If we were overly concerned about that stuff, you wouldn't see what you're seeing in the movie. There's much joy in it, I think. Why cut back on joy? (laughs) If you're in for a penny...

Quint: Well, that attitude is the reason why this movie has stuck with me and why I know I'm going to revisit it. We just don't get movies like this through the studio system very often.

Gore Verbinski: Do you know the film The Tenant? The Polanski film?

Gore Verbinski: I always loved when the head flies up through the window, like a basketball. That always makes me smile at how delicious that choice is. Are you doing that? Yeah, we're doing that. His early work is such an inspiration in terms of where you can go. That's one of my favorite movies.

Quint: I hope that whatever's next for you that you keep that spirit of just being true to the story and not worrying about whatever the mall audience expects to see. That's what I love so much about all your work. Even your most successful movies, like Pirates of the Caribbean, has those weird-o elements to them that I love.

Gore Verbinski: Well, thank you, Eric. Thank you for your support. I really appreciate that. Certainly I won't give up. We're in a different world every day, but I think that's just one more reason to go that far.

Quint: Do you have any projects you're working on now? Anything you can talk a little bit about?

Gore Verbinski: Too early to talk about, but we're in development on four or five things that are really interesting. I love this stage because it's just paper and ideas. There's no fiscal reality, no compromise yet. I'm living in this world right now and it's really fun.

Quint: Well, whatever it is I'm looking forward to it.

Gore Verbinski: Thank you very much. And based on your recommendation I can't wait to see Edgar's new movie! 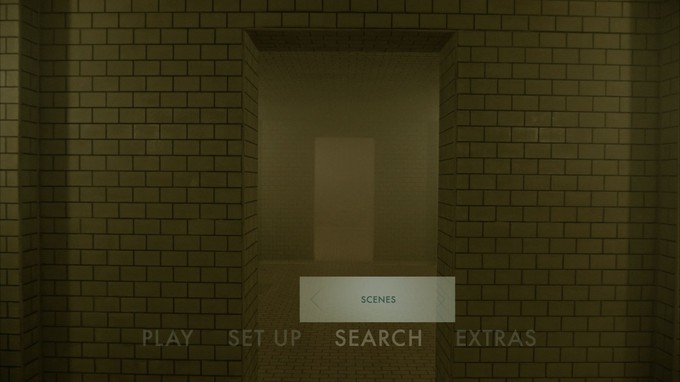 Hope you guys enjoyed that chat. It's always a pleasure talking with a filmmaker like Gore Verbinski and I hope to get the chance to do it again in the near future.

If you missed A Cure For Wellness in theaters (and like some fucked up storytelling) then make sure you give it a shot on home video. To paraphrase Mr. Verbinski, there's a lot of joy in the macabre elements of this crazy little movie.