Pretend you’ve never seen EXCALIBUR – you didn’t see Disney’s THE SWORD OF THE STONE -  You never read a book about King Arthur and the Knights of the Round Table – you’ve never seen MONTY PYTHON AND THE HOLY GRAIL.   You don’t know anything about the legend at all.  Now you're ready for... 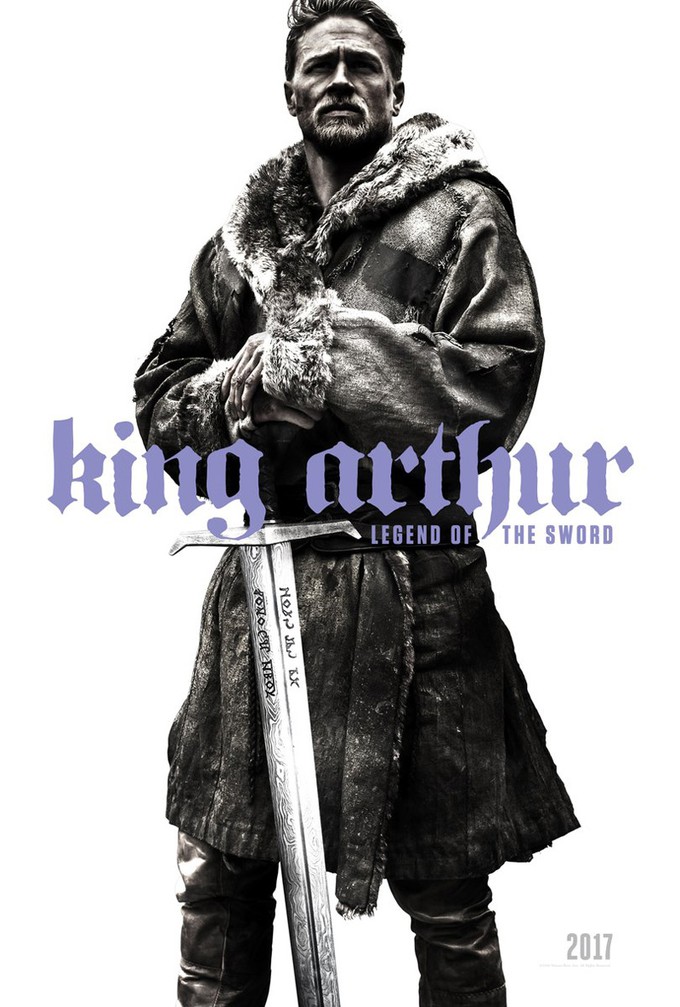 Before I saw Guy Ritchie’s KING ARTHUR: THE LEGEND OF THE SWORD – and as Father Geek and I were driving to the theater, we got into a discussion about what the expectations were for Guy Ritchie’s KING ARTHUR movie, a film that was made to kick off a franchise – with 5 more films to come, if this is successful.  I was aware of the multi-cultural castings – like Djimon Hounsou as Bedivere and Tom Wu as Kung Fu George and Kingsley Ben-Adir as Wet Stick.   Before Dad could pop out with the “so-called realities of England” – I mentioned…  You know, that the Arthurian Legends come from an 11th century so-called Historia Brittonum and 12 century poetry relating events of the late 5th Century & early 6th Century repelling of the Saxon hordes.  But really…  This is Dark Age material.   Who knows what England was truly like then.

If ever there was a Once upon a time, the Arthurian legends are from a time before us.   Which gives folks a great big honking latitude for being whatever they wish to make of the tales we’ll never know for sure about.   One thing is true, the Romans had already left Brittania at this juncture in time.   So while England had yet to sail the world, certainly the British might’ve come across a great many peoples of Earth – and perhaps in this period, people were more relaxed than folks of another time period.   Doubtful, unlikely…  but what the fuck, I’m certainly no EXPERT.   I love the legends – and in particular – I really fucking love John Boorman’s EXCALIBUR.

Warners and Guy Ritchie have another tact.   Or at least this is my reading of their approach based upon witnessing the film tonight.

Imagine that J.R.R. Tolkien’s desire to give England a pre-history mythology with THE HOBBIT and THE LORD OF THE RINGS…  Let’s just say – all that shit really happened.  Ok?   And let’s say that Frank Frazetta was tapped into all that era too.   Then, let’s say the only time you heard anything about King Arthur was a series of bedtime stories that your Great-Grandmother read to you as a infant – and you decided to mix your VAGUE memories of Arthur with those two sources.

That – in a nutshell is Guy Ritchie’s KING ARTHUR: LEGEND OF THE SWORD.

The movie launches you into this madness after a few screens of quasi-explanation…  but right from the get go – we’re at CAMELOT, which was under the attack of Mordred.  Now, you remember in Paragraph 1 – I told you to let go of all Arthur knowledge.   If you don’t – you’ll be like me in the opening thinking…  OH – a flash forward to the end.   Because everyone that knows Arthurian legend knows that Arthur’s in-bred asshole of a son, made with half-sister Morgana, was named Mordred and comes to battle with Arthur at the end of all things.   BUT AGAIN – that’s not this movie.   Nope.

Mordred is a mage, apparently gone made with power and bent on killing Uther Pendragon…  just go with it…   and well, he’s got LOTR style oliphants swinging enormous wrecking ball maces with their trunks, really laying waste to Camelot.

Uther sets out to take Mordred down – and when you see Eric Bana’s Uther grab Excalibur with both hands…  the sword and his Eyes have a bit of a power up blue haze happen – It’s a little crazy awesome actually – until he has to deal with Frank Frazetta’s DEATH DEALER or a Ralph Bakshi Ring Wraith – or the two mixed.   He’s enormous – and wielding a scythe that seems… empowered.   At this point, I’m like.  Ok -  not entirely sure what’s going on, but in now way shape or form did it feel like a Guy Ritchie movie at this point.

Little Arthur gets swept down a river to Londinium where he gets adopted by some nice ladies at a brothel.   Then we get a growing up montage, where we see Evil Jude Law come to power and Arthur learning to be a street rat, scoundrel…   you know the song, part of Ritchie’s next movie.   Anyway – next thing we know, a great many things change.   For one, Charilie Hunnam is now Arthur, he has multiple treasure chests of gold and like Neo, he knows Kung Fu.   Thanks to Kung Fu George, who, like everyone else in the story – ages not an ounce, whilst Charlie Hunnam is all growed up.   But then, Dark Age skin care was truly amazing – and mud packs had special herbs and spices long since gone from our world.

Every young man of an age close to the rumored BORN KING (Arthur) is taken to Draw the Sword which is embedded in a stone – and what the stone is – is explained later, and I actually dig the fuck out of it.   Now – through the Arthur of the Brothel stages – we see Arthur much like Jax from SONS OF ANARCHY, he knows the measure of things at a preternatural level.

Now – I’m not gonna step you through the entire film.   I loathe those kinds of Book Report attempts at Film Reviewing.   I find them tedious and unnecessary, especially when so many of you wait to read a review after you’ve seen the film.

But I will say – I will go into SPOILER TERRITORY from here on out.

Arthur, once he pulls the sword – gets sent into memory flashes of the night he lost his parents – this comes with two hands upon the sword.   It’s overwhelming initially and lays him on his ass.   He’s sent by a mage to place the sword upon a stone table – and he gets the clearest vision of all, but before that happens he must quest for it through the Dark Lands which are filled with beasties not currently in England, except maybe the giant rats that supported Brexit.

The absolute best parts of this film come from the back and forth between Arthur’s group.   The mage is neat, reminding me of the changeling a bit from KRULL in her eyes, not that she looks like a blind old man or anything.   She definitely has a 3-eyed raven running around somewhere cuz she seems capable of that whole bag of tricks.

We learn pretty quickly that Jude Law is our big baddie of the film – and Jude just doesn’t feel imposing at all.   But if he kills a loved one and lets their body go in this underground waterway, with octopus ladies (just like my arm tattoo btw, cool beans) well they grant him…  DEATH DEALER Form, which is fucking awesome, but… imagine if DARTH VADER could only look like Darth Vader for a little bit of STAR WARS and most of the time he had to be puny Hayden Christensen.   So, Jude spends most of the film pouting and throwing hissy fits – then when the shit hits the fan, he powers up.  I would have preferred him be a full on evil DEATH DEALER dude for the entire film.

Having most of that DEATH DEALER screentime be Arthur Flashbacks…  just was underwhelming and repetitive.

However, EXALIBUR powers – fucking rocks.   It is a bit like that opening of  FELLOWSHIP OF THE RINGS when Cate Blanchett is hypnotizing you into Middle Earth with her story about the Ring.  When Sauron shows up with his Mace – and ring on the outside of his armored finger – and it just lays waste to the foes before him.   EXCALIBUR is a full on super magic blade…  Kind of something I’ve secretly wished for FOREVER!  More than that though, it affects the man wielding it.  Suddenly he’s a god of combat, moving faster, chopping arrows in mid-flight.   It’s mighty fun.   Once you have him and DEATH DEALER fighting – it’s full on going on.

We don’t get Merlin in this first film.   But Astrid Berges-Frisbey… remember that Frazetta CONAN painting with the giant Snake?   She’s got one, that looks JUST LIKE THAT ONE.   But I liked it.   I like all the beasties you see in the film, I like the magic, the visit with the Lady of the Lake, the character work – and the rhythm of the movie.

The biggest complaint was that the film was clearly made for 3D.  Most of the big sequences feels designed for 3D, not 2D, where all the elements get smooshed.   The action in 2D with all the fury going on around them, in 2D, it’s a bit  hard to track the action.

There’s no Guinevere, no real use of Merlin, no Morgana, no Gawain or Lancelot.   No Holy Grail or quests for it.   This is about Arthur becoming king.   Nothing to do with what he does as king.   No real joy or whimsy to the magic, it’s all rather serious here, except for Arthur and his boys, which are filled with fun between battles.   Hell, even the bad guys are likable and have a bit of fun.

I’m curious to see if this does well enough for Warners to pursue more.  It’s certainly better than any Arthurian work SINCE the unassailably great John Boorman film, EXCALIBUR.   I’m curious to see their Merlin in this verse.   And what other things lay dormant in the earth waiting to be awoken.

I went into this film with very little prayer for having a good time – and I’d be lying if I didn’t say I had a great time.   Seeing it again in 3D is a must for me, as I feel it’d definitely help with some of the action.   Plus I know the 3D team is proud of their work upon it.   Curious to put that to the test as well.

Jude isn’t BAD exactly, it’s just…  Baby Pope is too fresh in my head and I found him more refined in the role than I’d care for – even if he went to Mage School all Harry Potter style.