Quint saw the first Dark Tower footage at CinemaCon and says it's kind of a fuckin' bummer.

Ahoy, squirts! Quint here. Y'all know me and that I hold Stephen King's Dark Tower series near and dear to my heart. Reading that series is the closest I've felt to a real life Neverending Story experience. As a young teen I stumbled onto Roland Deschain's quest to find and save the mysterious Dark Tower and I felt like I was there, part of his ka-tet.

I've seen this world so clearly in my mind's eye that I've been dying to see someone bring it to life on the big screen since middle school, so you have to believe me when I say one of the main reasons I got on a plan to Las Vegas was to hopefully catch a glimpse at what the movie was shaping up to be and at Sony's panel I got that chance. 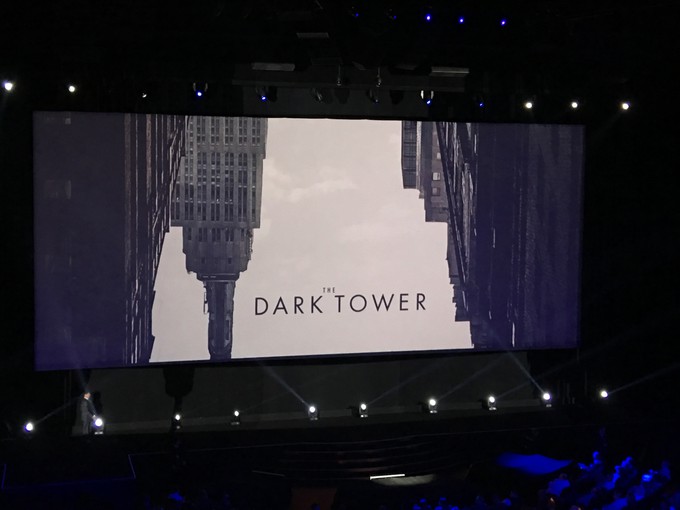 The studio showed a good 3 or 4 minutes of footage cut in a trailer form and it's with a heavy heart that I say that the footage fuckin' bummed me out.

I was psyched at the very beginning when we got some random shots that just screamed Dark Tower to me. One was of a regular wooden door standing alone against the backdrop of some apocalyptically burned out background, the number 1919 on top of the frame. This played as the people involved with the movie (like writer/producer Akiva Goldsman and director talked about how much they loved King's world and described how this story ties into almost everything he's ever written.

Unfortunately that was the last thing that felt tonally right on the money with the material I hold in such high regard and I'm not even sure it was something we'll see in the movie as there was a lot of Dark Tower art being shown at the same time that image flashed across the screen.

I want to curtail something before I dive into what I saw. I wasn't expecting a beat for beat adaptation, nor did I want one. The very nature of how they're telling this story gives them all the freedom in the world to play with some plot points. I don't mind them moving some of order of events around or changing up certain character interactions, but goddamnit it has to feel like the world I adore so much. And this didn't.

Mid-World is supposed to be a place that has moved on. Everything is old, breaking if not already broken. The Mid-World I saw in the footage didn't look that way, especially when there are giant hunks of sci-fi tech sitting around... not ancient stuff (that would be okay), but stuff that looks clean and newly abandoned. The sci-fi techy stuff is all over the footage.

The doorways between Keystone Earth (which is where we are) and Mid-World (which is where Roland is) are literal doors in the book, a great fantasy image of a doorframe floating in mid air, which is what excited me so much when I saw the 1919 door early in the presentation. In the actual footage from the movie, though, they look like Stargate SG-1 portals, triangular-shaped metal tech rippling with energy that allow someone to pass between worlds.

My brain just kept screaming “WRONG!” every time I saw one of those things in the footage and there were a few.

The symbols on Roland's six-shooters glowed blue at certain moments when he was firing off rounds, which also gave the story a sci-fi feel that feels entirely misplaced.

I didn't hate everything I saw. The kid playing Jake (Tom Taylor) actually came across very well and his interactions with Idris Elba's Gunslinger were my favorite parts of the footage. Elba himself filled out the duster pretty well. He's a tortured soul and Elba exudes quiet strength, rage and coldness, which is crucial to nailing this character. 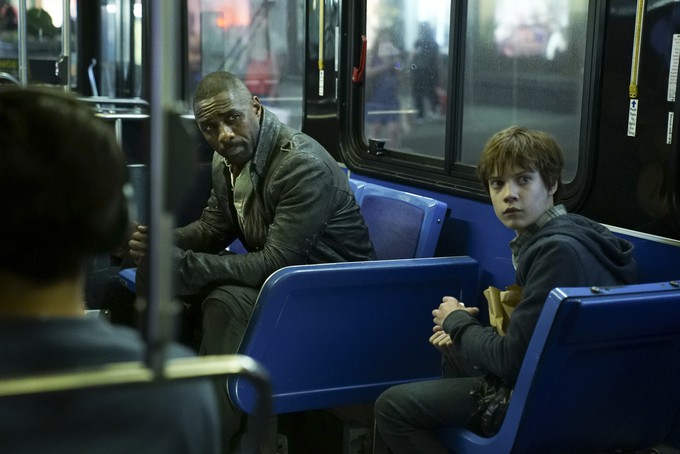 I have no idea what to make of Matthew McConaughey's The Man In Black. He's playing it reaaaaaaaaalllll big, which I both appreciate and am really nervous about. He also seems to have Jedi powers, inexplicably. There were a few battles between him and Roland we saw glimpses of where he was literally force-throwing objects at Roland as the gunslinger fired at him.

There was another scene where he's taunting Roland in the woods somewhere and says “The war is over, Gunslinger. You're trying to save the world, but you can't even save yourself” as he's walking away from him. Roland growls out part of his mantra “I do not kill with my gun, I kill with my heart” and he takes aim at the man calmly walking away, pulls the trigger and fires. Without looking back, the Man In Black's hand reaches back and grabs the bullet mid-air before it hits his skull and, not missing a step, he says “The tower will fall, Roland” with a smile.

I don't know if I like what they're doing with this character here, but I can be convinced it's the right choice. 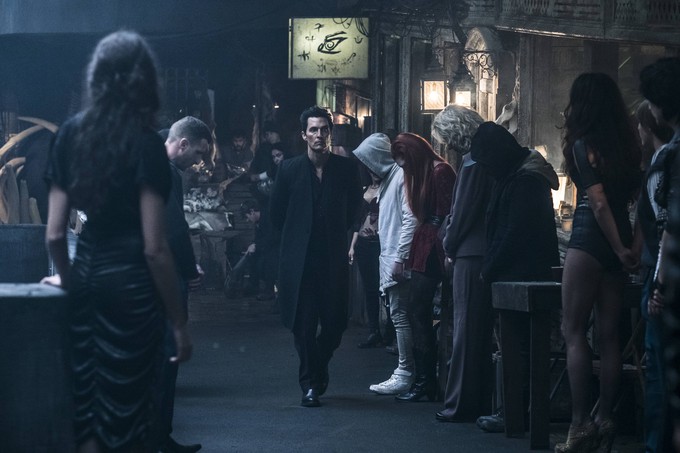 That's the thing. I'm a big Dark Tower fan and as a Dark Tower fan I have to acknowledge that this turn of the wheel is going to be different. What isn't sitting well with me is that this doesn't FEEL like the Dark Tower I know and love. That's the biggest bummer to me.

All the action scenes felt weirdly Matrix-y. Roland's speed reloads were shown two different ways, neither were all that great (but the effects for both were still rough). The first was that his belt was lined with fully loaded cylinders that he could just slap his gun against and reload and the second was him dropping six bullets into open cylinders in the middle of a gunfight and they each perfectly fell into place, which is more in line with the book.

Again, not something I necessarily would get caught up on if the world around him felt right, but another little bit of weirdness that has moved my personal needle on this adaption from cautiously optimistic to “Man, I don't know, guys...”

I'm trying not to be a Negative Nancy here, so I'll end this write up with two more things I liked about the footage. First, even in just a few minutes of footage there were already hints at strong attempts to tie Dark Tower in with other King stories, which is a big element of this story and one that I'm glad they aren't ignoring. Specifically there was a glimpse of a photo of the Overlook Hotel in a brief scene where Jake is talking to his psychiatrist about the dreams/nightmares/visions he's been having of a faraway land inhabited by gunslinging knights. (PS, that's something that survived the earlier Ron Howard version of the movie written by Goldsman and Jeff Pinkner, which I wrote about here).

Second, an extended sequence of a raid on what I believe is a Manni camp. In the books the Manni are a kind of Amish-like nomadic religious group that are known for their ability to travel between worlds. I could be wrong, but I think that's what this place was.

During this raid, a bundled up bad guy grabs Jake and Roland is desperately looking for him. He stops in his tracks, all manner of chaos going on around him, and he focuses. The sound drops as he concentrates. He focuses in on a piece of metal clanging against another piece of metal somewhere in the camp. He turns his head, refocusing, this time on a drop of blood plopping into a bloody puddle from a dead finger. He shifts focus again and we hear the rustling of the person that grabbed the boy, hurriedly running away.

Roland lifts his gun up, slowly, and aims it to his left. He doesn't look at where he's aiming. It's many seconds until he pulls the trigger but when he does the bullet rips through clothing hanging on a line, past dwellings and then right into the head of the guy running away with Jake, both falling to the ground.

It's a neat moment that is not really at all like what he does in the books, but feels right.

I hope my nervousness surrounding this footage is unfounded and let me tell you that there'll be no one happier than me if I leave that theater at the end of July with a big ol' grin on my face, but based on the few minutes I saw today I'm less optimistic of that happening than I was before. 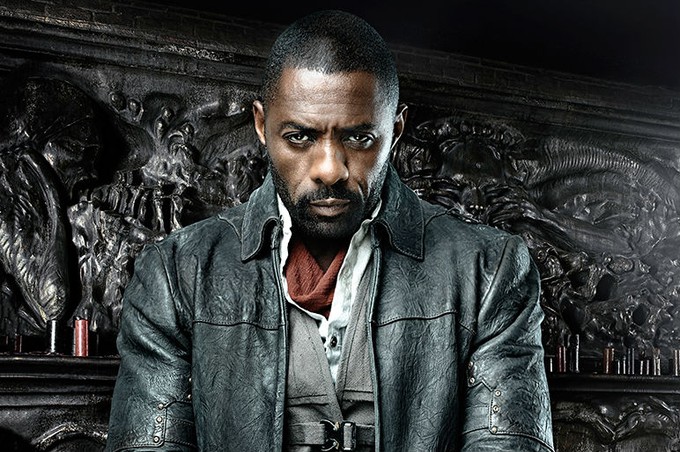 Tomorrow brings another day of CinemaCon, so stay tuned for more reports!