Ahoy, squirts! Quint here. Forgive me if this review is a bit loopy. Daylight Savings Time hitting SXSW opening weekend every year is pretty goddamn cruel, so I'm writing this at a pretty ungodly hour of the night/morning, but I was so psyched that I couldn't snuggle in for some much needed sleep until I got out my adoration for this film. 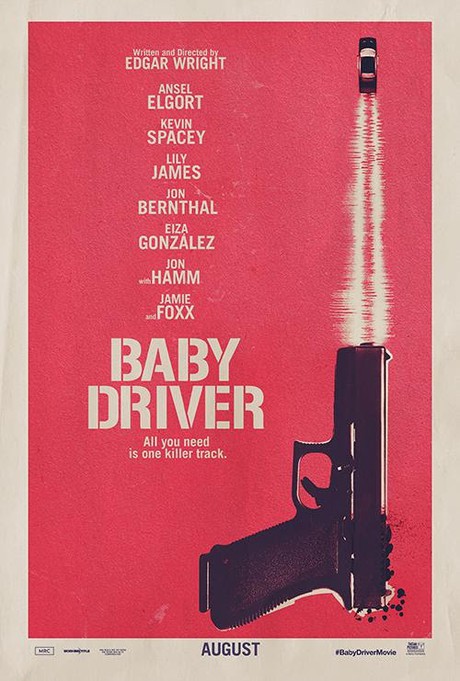 My expectations for Baby Driver were already through the roof so when I tell you that all I wanted to do was stand up and applaud the 113 minutes I just observed when the lights came back up you should know that feeling had to pass a bar set so high that it might as well be touching the ceiling.

I'm pretty much all in when it comes to Edgar Wright's cinematic sensibilities. Even ignoring his perfect work on Spaced and just looking at his big theatrical features there's very few in the current crop of modern filmmakers who have more consistently delivered stuff that tickles my geek funny bone than Edgar Wright.

And he doesn't just repeat the same movie. Shaun is radically different from Hot Fuzz and Scott Pilgrim and The World's End. Baby Driver is also far removed from everything else he's done... probably the furthest from his usual “type” of movie, actually.

Baby Driver is more polished and less crazy with his cuts and zooms than anything else that he's done, but it is also so thoroughly an Edgar Wright movie at the same time. His sense of humor, his understanding of character development and whip fast pacing are all on display, but in a slightly more grounded way.

I mean, Baby Driver is still about a young getaway driver who needs to be listening to music in order to be the almost supernaturally gifted driver he is, so when I say it's grounded I'm not saying it feels exactly like the real world, but more so than his previous films.

Wright's always had an amazing ear for his soundtracks and Baby Driver is perhaps his most important gathering of music to date. The music here is actually integral to the story and woven in beyond simple needle drops. There's choreography to the music, not just in regards to the actors in the scene, but also with car stunts, gunshots and even set dressing.

Edgar made his movie musical, except he did it with crazy stunts and violence instead of singing and dancing.

I must admit to being a bit of an Ansel Elgort denier before this movie. I haven't been so wrong about an actor since I wrote off Channing Tatum being boring and wooden before he really got a good role that let him cut loose and unleash his charm. I thought Elgort was talented, but holy shit is his charm, timing and pure likability off the charts in this movie.

He plays Baby, a young man with Tinnitus so bad that he has to constantly listen to music in order to drown out the ringing in his ears so he can concentrate. He's not some kind of quirky asshole or simpleton. He's an incredibly smart kid that's in debt to a pretty bad guy (played with relish by Kevin Spacey) and he's working his way out of it. He's a little introverted, but he has a big heart.

That big ol' heart doubles in size when he finds a soulmate in Lily James' Debora and who can blame him? It's going to be very difficult for any audience member not to fall at least a little bit in love with Deb, Baby and Deb and Baby as a couple. They just click and their chemistry is so strong that they'll remind you of that annoying couple in your life that perfectly compliment each other and know it. Everybody has one of those pairs around them. 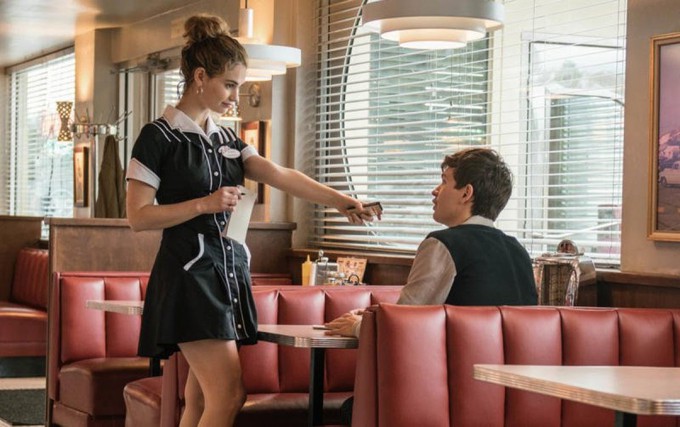 I remember when Elgort was rumored to be a finalist to play Young Han Solo and I scoffed at the idea. I was so fucking wrong, you guys. I mean, I'm sure Alden Ehrenreich is going to be great in the movie, but after seeing Elgort in Baby Driver I'm flat out shocked he didn't get the role. There are moments in this movie where he doesn't just exude a young Harrison Ford vibe, he also looks like the man. Some of that might have been his jacket which looks suspiciously like Han Solo's vest at times.

You think you know how this movie's going to go. You think it's a “one last job” movie, but even if you're super film literate Wright knows more about movies than you do and he knows what you're expecting so he throws in a lot of curveballs. There are characters you love that become not quite so loveable and vice-versa. There are heist scenes you're pretty sure you have figured out, only to have them go off in different directions.

There's no part too small in this film. Every single person has something to them, whether it's the grumpy cook at the diner Debora works at or the enthusiastic black market arms salesman (a wonderful cameo film fans will freak over, but one I won't spoil here). Every single person resonates in some way, which makes the world feel populated. When you combine that with Wright's breakneck pacing and Bill Pope's unbelievably gorgeous photography you get something truly special.

It really feels like Edgar's hitting his stride as a filmmaker. He's at that perfect spot where he's got the confidence and talent of a veteran filmmaker, but still has the fire of a young pup with something to prove. His character work is nuanced but not arty-farty, his action is exciting without being nothing but shaky-cam confusing the geography of the sequence, his eye for casting is sharper than ever and he's still not at all phased about going after original content.

I already sang the praises of Elgort and James, but I would be remiss not to bring up his co-stars. Jamie Foxx plays an unhinged, violent criminal named Bats and he's having so much damn fun with this role he's almost bursting with energy. 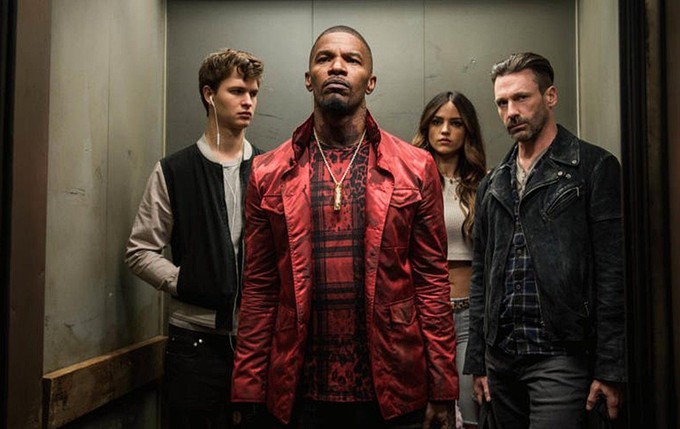 Jon Hamm is known for more dramatic work, but he's been showing a secret talent for comedy for a few years now and he gets to meld both of those together as Buddy, a criminal who digs the thrill of robbing banks, which acts as a kind of aphrodisiac with his relationship with Eiza Gonzalez's Darling. He's got charm to spare in this part, but gets to play some pretty dark stuff.

Kevin Spacey is at his Kevin Spaceist here, playing a guy who should be one-note, but thanks to some smart dialogue, a couple nice character twists and a whole-hog performance by Spacey we get one of the more entertaining heavies in a long while.

One of the big surprises of the movie for me was CJ Jones, who plays Baby's Foster father, Joseph. The character is deaf and Jones is a deaf actor, so you immediately cut out the bullshit of an actor with hearing pretending to be deaf, which leaves so much room for an incredibly sweet relationship to form between Jones and Elgort. Here's another way Wright threw a curveball at me. I expected the romance angle. I didn't expect a legitimately touching father/son story to sneak in there as well. 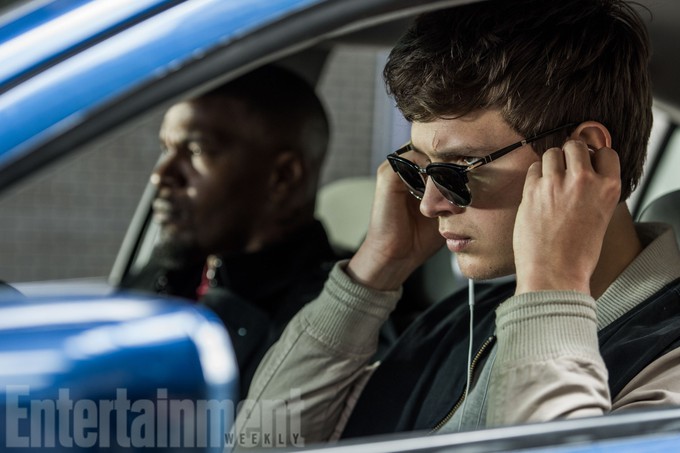 Fuck, this is a good movie. I'm so sorry you guys have to wait until August to see it, but I promise you it's worth the wait.