Harry feels Gore Verbinski's A CURE FOR WELLNESS is so good it's almost Korean! 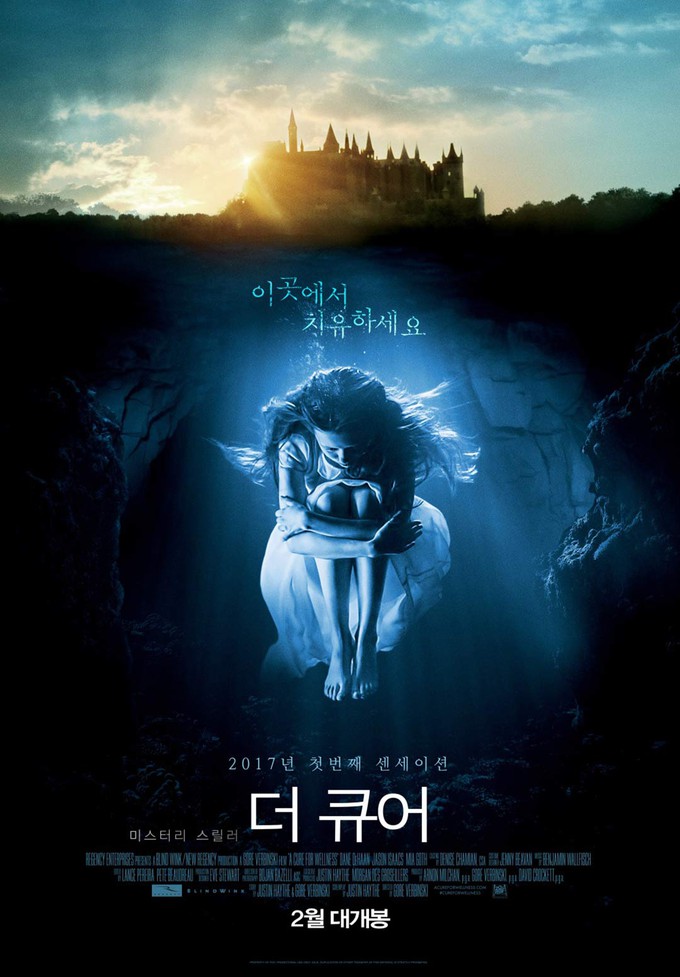 Stumbling into A CURE FOR WELLNESS, as I did, was a trippy situation, mind you, however you stumble into Gore Verbinski’s most successful bit of mind fuckery yet…  it will feel trippy.   The film even plays with gaslighting the audience into making you think maybe you’ve seen something and then later acting as though you didn’t and that’s because…  In A CURE FOR WELLNESS – the narrative has been drinking rather remarkable water from the Swiss Alps.

I saw this in a screening room at the Highland Galaxy here in Austin.   It was Father Geek, myself and 5 security guards with glasses making sure we wouldn’t FACEBOOK LIVE the movie.   That’s not an exaggeration.   When it’s a full theater and there’s that much security, I get it.   When it’s two film watchers and 5 security guards watching them… well, it makes the hairs on the back of my neck stand up.    It really does.   Heebie jeebies, and this is a Heebie Jeebies kind of film.

You know, a film where you’re gonna see shit that will perhaps revisit you when you shut your eyes at night.   There’s some genuine fuck it all, this is nightmaresville!   Seriously.

There’s also a surprisingly adultness about the craft of the film.  You’ll notice it almost immediately in the beautiful framing and symmetry to shots.  The lighting, the patterns, the dreamlike drip of the film.   Drop by drop lulling you into thinking you know where it is all headed.

On the comment card the  studio had me fill out, I said, it felt like an American Korean Thriller.   There’s a crossover of ick that’s unshakable for me.   Then there’s the sonics of the film, there’s a lullaby, but then there’s dissonance that plays with my ASMR and squirrels my spine with a severe case of the creeps – and that’s spectacular.

The film is also like a Grimm’s Fairy Tale for the Wall Street Set.   Like, what becomes of the top 1%.   When they’ve had enough of the world, what do they do, where do they go?   This mystery fairy tale is a journey to discover what’s really going on in this Wellness Center.   And why must you drink so much water?

Oh – it’s a joy.  A perverse joy perhaps, but you know… the super rich are fucking freaky – and man going back to them days of Lady Bathory, there was all sorts of sick fucking beauty and youth treatments that the ruling classes would be decadent immoral monsters – and who knows – maybe there is creepy fucking immoral shit that’ll make you live forever…   but man, the hoops one has to go through would tear at the soul.

I love these stories.   The location in this film is just breathtaking.

Now – Dane DeHaan…  I mean, he’s already played Harry Osborne, so the idea of him passing for a genetically predestined for power madness style shitberg…  yeah, I’ll buy that.  But DeHaan’s eye-bugging is superior stuff.   He’s got that trembling freaky eyeball deal down pat.   His Lockhart is on shaky ground from the moment go here.   As for his ambition and the pressure he’s under – both self-inflicted wounds.   When he goes after Pembroke for his company, it seems like a simple GET OUT OF JAIL FREE CARD.

There’s so much EWWWW, I just don’t know what to do.   It’s a crazy thing – You see, somebody hands you a clean glass of water, you don’t think a thing about it.   It’s strange reading about nanotech and thinking about what could one day be in water, hell all the shit that gets in water.  I’m drinking distilled water right now.  I don’t like minerally tasting water.   Tap water is just pure gross.   And as someone that’s been to Sweet Water and Mineral Wells… and seen THE ROAD TO WELLVILLE, this sort of “Special Waters” tale is enough to make me not ever wanna go.

So what’s in the water?

Well, it’s bad.   It’s like, toxically bad.   Like maybe occult bad.   Maybe something more evil.   If you do not like orifi-violation in film…   you’ll have a rough patch here or there.  I’m pretty sure that everything in this movie happened to me when I had my spinal surgery.

And watching this movie may incept the nightmare of this film in your own head.   I could see how one might not enjoy this movie.  There’s a lot of brave wimps out there.   Me, I can handle everything with a varying degree of holding my face together to not dislodge my jaw in abject horror.   I mean.   They do something, that just ought not ever be done to a conscious person.   I’m just saying.   FUCK THAT.

Now, about this Mia Goth has been cast in that SUSPIRIA remake.  Man, talk about almost impossible standards… and yet, in A CURE FOR WELLNESS, Mia Goth has down pat – creeped out weird odd beauty thing.   She had that in NYMPHOMANIAC VOL II as well.  There’s levels of fucked upness with her character, that whoever you see this movie with…  you’ll discuss, maybe argue, but you’ll have a very definite conversation about what exactly is going on with her at the end of this film.   And for that matter, Dane’s Lockhart either.

The film feels like the exact kind of experimental risky creepy awesome studio adultness that you don’t see with film.  It’s a 2 hour and 26 movie – and I don’t know about you, but sometimes even that feels short for me.   But the film has a trip it wants to take you on.   It’s got a wicked vibe to the film – it’s a fine wine of mind fuckery.

Playing it at BNAT was a blast.  Watching it again last week for the third time was great.   This is a specific flavor of cinema.   It’s that film you sit down for under 2 and a half hours and you dare it to scare ya, to mess with your head.   Our fucking reality has made you invincible hasn’t it?   Surely there’s nothing worse than our current Government.   Well, you could be at this  Wellness Center in the Alps.   It’s seriously a messed up vacation.   Book it!

I lied, one more story.  I promise, it’s a good one.  At THE WORLD’S END premiere after party in this basement club, I met Jason Isaacs, who got down on his knees and geeked out about how much he loved AICN and the crazy Talk backs and it was about an hour.   My wife witnessed this whole thing.   Now, I love Jason Isaacs on film, had no idea he read the site, but he’s Daddy Malfoy – and Daddy Malfoy gives me the heebie jeebies.   And while we’re talking, I start thinking about how this fucking bastard mistreated Dobby… and suddenly he Gleeks into my mouth.   A bit of spit projected from his mouth, unintentionally I think, and it landed squarely upon my tongue – and I fought every vomit impulse I had.   DADDY MALFOY DNA ON TONGUE!  NAPALM!   Ok – so in A CURE FOR WELLNESS… there’s a lot of scenes of Jason Isaac’s obviously evil psycho doctor sticking his tongue out and dripping a special drop upon it – and I shivered every time, all three times I’ve seen the film, I shivered every drop.   Now I know, that is context you don’t have, probably never needed to know, but a great deal of A CURE FOR WELLNESS, I was suppressing actual phobic memory.

It enhanced the creepiness of this already very creepy mind fuck flickery – and I love that.   I love to feel repulsed in a repulsing scene of a movie.   I love to cry if a film makes me sad.   I love to cheer and clap and feel alive through a story that is not anything like the day to day we see in this world otherwise.   Plus it’s just fun to think about the fucking uber rich fucks paying for this treatment!  There’s an austerity horror element that is twistedly rich.   The film is challenging and might ought to be seen twice before final judgement.   There’s a lot at play here!