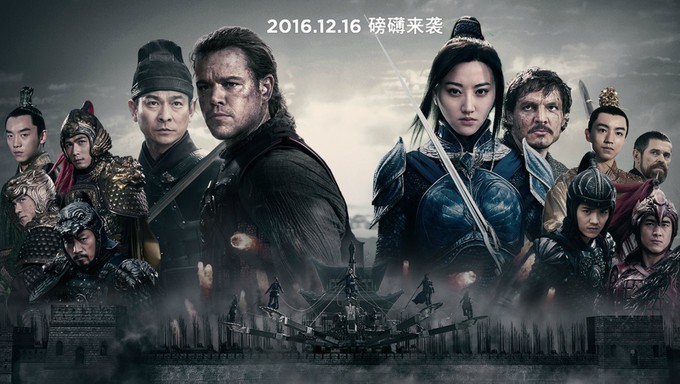 First off – I fucking loathe how this movie is being sold.   I get it, Matt Damon is the big name brand in the United States market, but that’s disgusting.   This is Zhang Yimou’s THE GREAT WALL.

You know, the director of HERO, HOUSE OF FLYING DAGGERS and CURSE OF THE GOLDEN FLOWER.   You know…  a fucking MASTER of Chinese fantasy cinema…   And he’s getting to make a film working with Industrial Lights & Magic, Willem Dafoe, Andy Lau and Pedro Pascal…   You got the DP of THE PIANO and the DP of Zhang Yimou’s – and they’re unleashed here.

This has been a passion product for Thomas Tull’s for a very long time…  But while this may look like another PRINCE OF PERSIA, where you have an inappropriate Caucasian playing well outside of his own ethnicity…   Matt Damon and Pedro Pascal play a pair of European fortune seekers that have spent 8 months traveling by land to CHINA in pursuit of their mythical black powder, which was still a mystery to Europeans.   They had once been a much larger party of adventurers, but the violence of the journey left them as two fleeing mountain bandits till they wind up at… THE GREAT WALL.

There’s a secret that the Posters which proclaim MATT DAMON:  THE GREAT WALL…  or the trailers filled with English…  well much of the film is subtitled, because while Matt Damon is a main character, the co-star is Tian Jing, who plays Commander Lin Mae…  I’ve been aware of her from POLICE STORY: LOCKDOWN, THE MAN FROM MACAU and DRAGON NEST: WARRIOR’S DAWN, but here she really steps it up, I suppose that’s why Legendary has her in KONG: SKULL ISLAND and PACIFIC RIM: UPRISING.   They believe in her, and you’ll absolutely discover why in THE GREAT WALL.

You see, Matt Damon does everything he does in pursuit of Tian Jing’s Commander, who is tasked with commanding the great forces of the Great Wall.   The Chinese armors in this film are just breathtakingly beautiful.   Tian Jing’s blue armor, I just was in awe of most of the movie.   Ancient Chinese armor and weaponry is just the stuff of grand dreams.  I got my Nephew a Chinese battle mace a few years back that is one of his fave possessions, and it doesn’t hold a candle to the amazing cool stuff in this film.

I love the inner workings of the Great Wall.   Just a note, I visited THE GREAT WALL whilst in China for the KILL BILL set visit.   I was one of those kids in the 70s that spent a lot of time in libraries reading about how amazing our human cultures have been.   Sure there’s violence and terror and plagues – and just all around shitty days and periods.  But every now and again, a culture does something astonishing – and the Great Wall of China is one of those things.

It was built to keep the Mongol hordes at bay, but I love with Edward Zwick and Max Landis concocted with this legend of a green meteor that struck the mountains and unleashed these Guillermo Del Toro-ean meets Wayne Barlow meets Chinese Beast Dragons… via the wizardry of ILM.

I don’t know about you, but I love Chinese Fantasy.   I love their mythology and one of my favorites was 7 BROTHERS VERSUS THE GOLDEN VAMPIRE – a Shaw Brothers meets Hammer film jam picture.    It actually has Grand Moff Tarkin, Peter Cushing doing his Van  Helsing thing & a magnificent seven of martial artists versus Hopping Ghosts and Chinese Vampires – and it’s a fucking blast.

THE GREAT WALL creatures cooperate not unlike the Zombies of WORLD WAR Z, there’s a communication and intelligence inherent to the creatures that could be superior to man.   In some ways they remind of the creatures Hellboy fought in his first film.  There is a very NOT OF THIS EARTH vibe.   And it is like they are bound into this mountain pass and could only escape by breaching the Great Wall.   Watching this era of battle and combat, whimsical aerial hot air balloons… however nothing really prepared me for the Stained Glass Tower of the final sequence of the film.   I really want a VR Meditation palace like that thing.   The beauty of color, the motion of the air in there.   It’s stunning stuff.   Reminds of some of the great Cathedrals that I’ve been to, where color envelopes a space and becomes pure magic.  It’s one reason why all windows in my home have Stained Glass windows – love them.  Never see Stained Glass tower before.  Gosh it was sure purty!  Zhang Yimou is a cinema master that knows that while he’s creating great violence and mythical creations…  beauty is ever present.

It’s a very different aesthetic and one I absolutely loved.   How do I like Matt Damon being in this adventure?  Well, He seems to favor an English Longbow – and he’s very much a magical archer in this film.   Green Arrow style accuracy and poise.   So basically, imagine if Robin Hood had a Chinese Adventure with Meteor Monsters from Outer Space – and if you can’t have fun at a movie as popcorn as that…  Maybe, just maybe, you should relax a bit.    THE GREAT WALL is a walloping adventure that’s a great what if tale.   A big yarn at the greatest wall there will ever be.   Plus – to a young nation looking to build some manner of wall…  the siege points out quite a few problems with Walls being an answer unto themselves.   You’ll see.

Now, I know, I haven’t gone into what Willem Dafoe is up to, or Pedro Pascal…    But really, I’ve told you what you really need to know.   This is a magical Science Fiction Ancient Chinese Great Wall Action with a Robin Hood character thrown in for shits and giggles.

It’s a melting pot film with cultures clashing with styles of filmmaking and the result – in 3D – is just a real damn good time at the theater.   Also – who better for epic fantasy scoring, but Ramin Djawadi of GAME OF THRONES and WESTWORLD fame.

I have to admit…   I kinda wanted to see the mythical meteor mountain strike and the initial encounter where this all began.   There’s a lot of fun play in the dream of this legend they’ve created.   Film has done incredible in China.   Wish more people were excited for this one!