Copernicus is a fan of THAT'S NOT ME at SBIFF 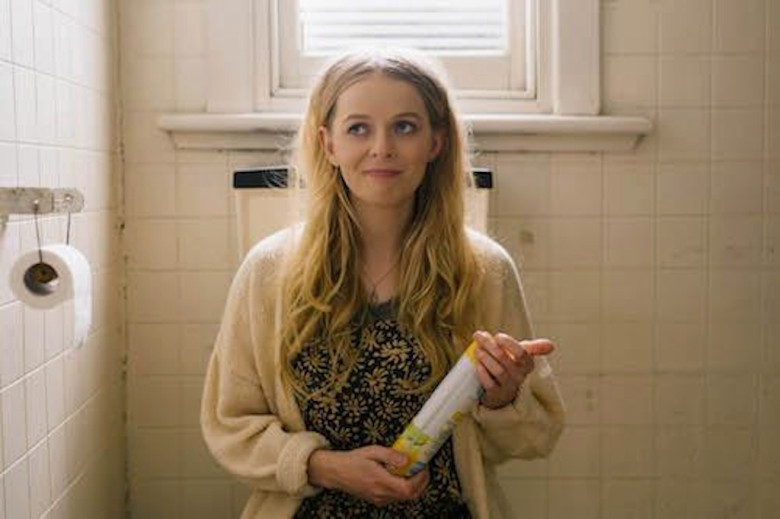 Some of the great things about the Santa Barbara International Film Festival are the premieres of independent and foreign films, and the support that the festival shows for the filmmakers.  They come in from all over the world and get to meet other artists, journalists, and festival attendees at some of the many parties thrown by the festival.  THAT’S NOT ME embodies all of these things — it is the premiere of an independent Australian film, and had a strong showing from the cast and crew.  Husband and wife duo Alice Foulcher and Gregory Erdstein wrote the film, while Erdstein directed, and Foulcher stars.  I met them both at one of the festival parties, where I followed up on how the film came together after having already enjoyed it.

The story follows identical twin sisters who are struggling actors. When the better actor of the two, Polly (Alice Foulcher), turns down a soap opera role because she’s not albino (as the character is supposed to be), the other sister, Amy (also Alice Foulcher), leaps at the chance.  This jumpstarts Amy’s career, and drives a rift between the sisters.  The film focuses on Polly as she struggles to get work in the shadow of her more famous sister.  Her parents just make things worse with their constant talk of the more famous daughter.  Polly isn’t helping anything, as the sizable chip on her shoulder causes her to make some ill-advised decisions.

I’m not usually a fan of movies that delve into the inner workings of the film industry, since it just seems like inside baseball that most won’t be able to relate to.  But I was attracted to THAT’S NOT ME in spite of this.  The main draw is the well-realized, and darkly comedic, portrait of sisterly rivalry.  I’ve seen a similar thing play out amongst sisters I know, where one is a successful actor, and the other struggles to come to terms with it. The entertainment industry is a perfect backdrop because success there is indeed so random, so unpredictable, and so dominated by who you know.  Still, when you aren’t rooting for your sibling’s success, the issues might not lie with her — they might be with you.

Maybe the closest thing for American audiences to compare to is FLIGHT OF THE CONCHORDS.  There aren’t any songs in THAT’S NOT ME (ok except a glorious one at the end of the film), but here the film industry is sent up with as much absurdist zeal as the recording industry is in FLIGHT OF THE CONCHORDS.  The two sisters are played straighter here than in CONCHORDS, because the plight of the main character is taken more seriously.  But there is a great supporting character who pops up throughout, Oliver, a tone-deaf play-turned-film director who is the walking, talking embodiment of the film industry.  He’s played by Rowan Davie, an actual playwright, who judging by his antics at the film festival parties, didn’t have to stretch to play ridiculous.  He may have even had to tone himself down.  I mean that in the best possible way — I’d watch a movie in which he was let loose to do improv any day.

I really have to hand it to Alice Foulcher, who shoulders all the drama and character development, and gives one of the best twin performances I’ve ever seen.  There are a couple of scenes where she’s playing both sides of it, and you’d swear that she had an actual twin performing in the room with her.  We’re engaged with her struggle as Polly, but we can’t help but see Amy’s side too.  Having nuanced drama embedded in a comedy is a tightrope walk, but she’s got the skills to land it.

Kudos also to the co-writer/director, Gregory Erdstein.  The film is tight — every scene matters, and some, like the twin shots, were no doubt technically challenging.  Having a ton of shorts to his name had to help, but you’d never know it was his first feature.

To be realistic, THAT’S NOT ME probably isn’t going to break through in the US.  The practical realities of the film universe here is such that without being a known property or having huge stars, people won’t see it.  It also doesn’t go over the top in terms of either comedy or drama, or add gimmicks.  But what it does do is showcase talent.  I hope it has a great run in Australia, and I hope to see more from everyone involved.