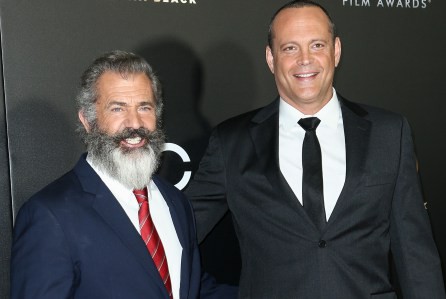 Ahoy, squirts! Quint here. Now this is interesting. Bone Tomahawk's S. Craig Zahler has a movie in development called DRAGGED ACROSS CONCRETE about two bad egg cops who are caught on camera abusing their power and resort to the world of crime while on suspension.

Topical and already so gritty I can almost see the film grain already. Even moreso when the two cops will be played by Mel Gibson and Vince Vaughn. It's a different kind of buddy cop movie for Mel and he's in his "Sheriff Years" as casting agents would say, which means he could really bring a lot of darkness and gruff to this part.

Sounds pretty amazing to me, actually. Vaughn isn't someone I'm always 100% behind, but after seeing his work in True Detective and more recently Hacksaw Ridge I think he could be a pretty good counterpart to Gibson in this kind of story.

Bone Tomahawk was brutal and big and a little grimy. If Zahler brings that kind of tone to this story we could have something really cool on our hands. What do you folks think?