Ahoy, squirts! Quint here. Junket interviews can be frustrating. Everybody's stressed out, the talent is usually exhausted and the time we get with them is almost always too short. Sometimes you can get a great, insightful chat outta one of these weird conveyer belt style set-ups, though, and that's exactly what I got with Gareth Edwards when discussing Rogue One.

A simple question about the creative process at Lucasfilm right now spurred on a rather interesting conversation about the origins of Rogue One, how it was put together and the thought that went into its influences, how they made it “feel” like Star Wars without simply ripping off what we've seen before and where the Death Trooper design came from.

We also talk a little bit about how Edwards traded cameos with Rian Johnson, which is pretty neat, plus where to look if you want to try to spot him in Episode VIII.

This is one of those rare junket interviews that is somehow insightful and detailed without giving anything away from the movie. Hope you enjoy it! 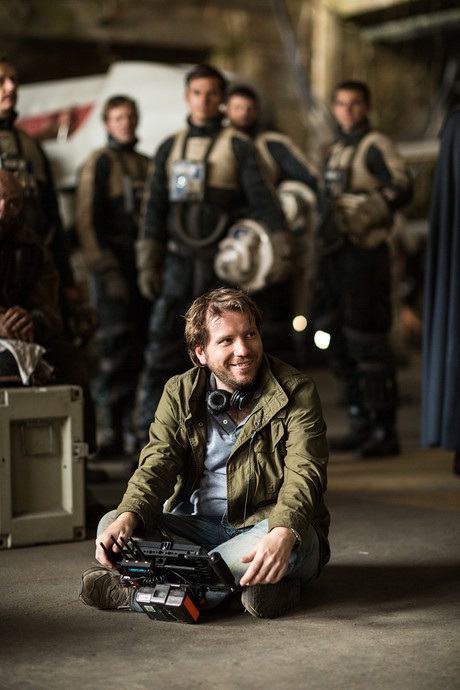 Quint: How are you holding up, man?

Gareth Edwards: You don't get to complain when you get to make Star Wars. It's in the contract. I think it's section 78b.

Quint: I wouldn't actually be surprised if it was. I'm sure those contracts are super thorough. I can't imagine how thick the contracts were on Episode VIII.

Gareth Edwards: I got to have a cameo in it, actually. It was in the middle of my finishing the film and it was crazy. Rian (Johnson)'s in our movie and I said I'll trade you a cameo. You can be in ours as long as I can be in yours and we did the deal. He's got a really good role in ours, it's really cool. It came out of the blue. Suddenly he was like “If you're going to be in it, it's gotta be on this day and this time.”

I'm glad it happened like that, actually. If someone said you're going to be in Star Wars I would have over-thought it and been really nervous. Instead it was this kind of “Okay, quick. What do I have to do? Okay, I haven't got long...” and I didn't have long. Suddenly it was “Okay, cut. You're done” and I was like “Crazy, I was just in Star Wars!”

Quint: Do you have a hint at what you were doing in Episode VIII?

Gareth Edwards: (pause) I was in the Resistance.

Quint: So, if we keep an eye on the Resistance soldiers we'll get to see you in the movie.

Gareth Edwards: Yeah. I think this is out there, I think he's talked about it, but my jacket has Aurebesh for R1, which is a nice touch.

Quint: I'm very interested in finding out a little more about what the creative process is like at Lucasfilm right now. Can you walk me through your first few months on the job? You sign the contract, then what? Are you working with the screenwriter or the screenwriter and the braintrust, people like Pablo Hidalgo, at the same time?

Gareth Edwards: The first six months were development. For anyone who doesn't know, that's the bit where there's only a handful of people. In theory you sort of write the screenplay, you design the world and cast the movie slightly. Then there's pre-production where you build the sets, find locations and continue to cast.

In development we were here for about six months, just in that office over there, actually. We'd come in every day and the day would be split into two. Fifty percent of what I was doing was with Gary (Whitta), who was the writer then, with Kiri (Hart) and the story group... sometimes with just me and Gary, sometimes just with the story group, and we'd chat through ideas of what we wanted it to be. We'd play around a lot. Sometimes you're led by strong visuals and sometimes you're led by purely ideas.

The other 50% of the time was with the concept artists, led by Doug Chiang and there was Erik Tiemens and Ryan Church. At the very start of this it was such an infinite canvas. It was “what have you always wanted to see? What as fans would we want to see?” and we started doing some images, things that would pop and make us go “Oh, that's so cool!”

This started interacting with story development because we'd draw pictures that would then inspire ideas story-wise, which would inspire more pictures. After about three months we arrived at a story that was not really a world away from what the final film is. The rest of the two years we spent was the refinement of those ideas, slight restructuring and condensing.

But here was the honeymoon period, this Utopian thing where you could do anything you want. It was probably the most exciting time I had, coming into Lucasfilm every day, sitting and draw spaceships and robots and talking about The Force and ideas for the film. Then the machine kicks in when you get to pre-production and it's like this train that won't stop. The stress is a little bit more then because you gotta start hitting deadlines.

Quint: You're Buster Keaton laying the track in front of the train.

Gareth Edwards: Yeah, throwing that plank down just in time.

Quint: That sounds both exciting and terrifying at the same time.

Gareth Edwards: You feel every emotion under the sun.

Quint: When you're making a movie that's kind of a suicide mission style movie, obviously the script has to be there, but so much of it depends on the chemistry of the core team because if you don't care about them and the odds they're up against then it doesn't matter how smooth the action writing is. That chemistry has to work. How long did it take you to assemble your cast? Was that process something that took a lot of trial and error or was it something that came pretty naturally?

Gareth Edwards: We didn't do the thing that George did, where he would try groups together. All the casting was done individually.

What they got so right in the original films was all those different archetypes and characters that make up the story. You've got things like a mentor character, you've got a sort of reflection of your future self with Darth Vader and Luke. In our movie we tried to carve that pie up and be as careful as we could, but swap things around.

For instance, you take the slices of Luke and Han and we put them together, sort of jumbled them up and then cut them again and that became Jyn and Cassian. We took the slices of Chewy and C-3PO and cut them together and that became K-2S0, then we took slices of R2 and Threepio and we rewound them to become the original influences, which was the two squabbling Asian characters in The Hidden Fortress. That became Baze and Chirrut. 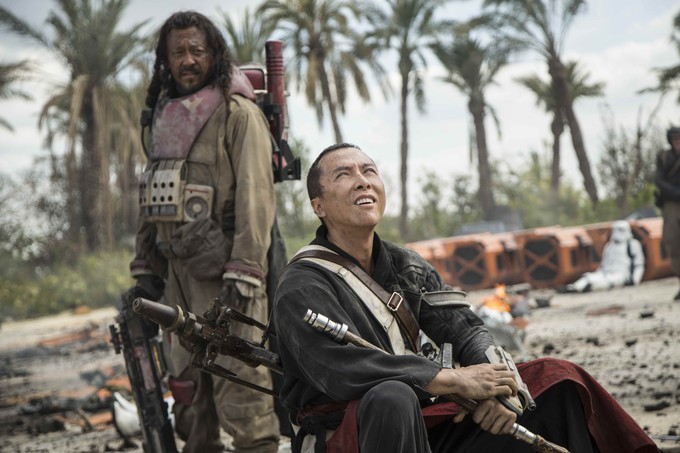 Sometimes there were ideas that were great, but it just didn't feel like Star Wars or it's repeating something or it's too similar to something else we have.

Quint: You have such a tightrope to walk here, too, since you're butting right up against one of the most iconic and well-known movies of all time. You want to make it feel like it fits, but you don't want to repeat it.

Gareth Edwards: Yeah. I think instead of repeating it what you do when you get stuck is you reflect it or you invert it. There's a lot of reflective stuff, like Luke is a guy who grows up in a peaceful home and dreams of going to war, so Jyn is a girl who grows up in a war and dreams of going back to a peaceful home. It's not as literal as that, but I do believe stories are circular and they repeat or rhyme and reflect themselves.

Quint: That's something Lucas was really big on, too.

Gareth Edwards: Hopefully Rogue One mirrors A New Hope to an extent. It was totally subconscious, but at the beginning of Star Wars you have a guy in a black cape, Vader, with white Stormtroopers on either side of him coming forward and at the start of our movie you've got a guy in a white cape with black Stormtroopers coming towards you. It seems quite literal now, just inverted, but there was something about it that just felt correct, but not what we'd seen.

I was trying to do that all the way across, even in the environments, like the Scarif planet. WW2, obviously, was a big influence on Star Wars and George took footage from WW2 movies to construct the dogfights. Looking at all that and then looking at the South Pacific and thinking he's pretty much used every ecosystem idea you could have. You're running out of planet ideas. You've got your desert planet, your ice planet... This idea of a tropical island-like look felt like paradise and was a really good contrast to A New Hope.

Quint: I see where you're going with this. If Star Wars was the European front of WW2, this is the Pacific front.

Gareth Edwards: Right, right. All the things that influenced George originally feel like they're influencing this film, they're just different bits that he either ignored or couldn't fit into the film. We always tried to go back to what inspired George. Is there something in there that could inspire us.

Like, we went down into the archives at Skywalker Ranch and there were some drawings. The very first drawing ever of a Stormtrooper had him really tall and really thin. You're like “That looks cooler than Stormtroopers! Why didn't he do that?” The answer was they couldn't because after they put padding and armor on people they're chunky, so decided to try to do that and they became the Death Troopers. We cast tall, thin people. (Sensing the publicist hovering over his shoulder) We're getting looked at, aren't we? 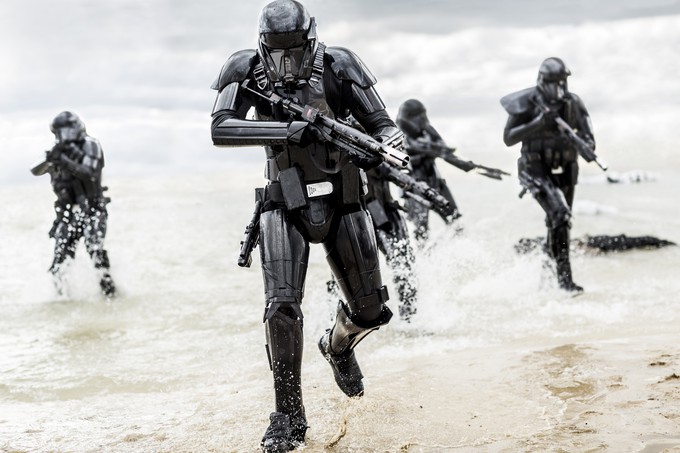 Quint: I could talk to you forever about this stuff, but I'm afraid we gotta wrap it up. Maybe we'll get to pick it up at some other point in the future.

Gareth Edwards: I suspect I will be talking forever about Star Wars, so maybe so.

Quint: Ha! Thanks for your time, man, I appreciate it. 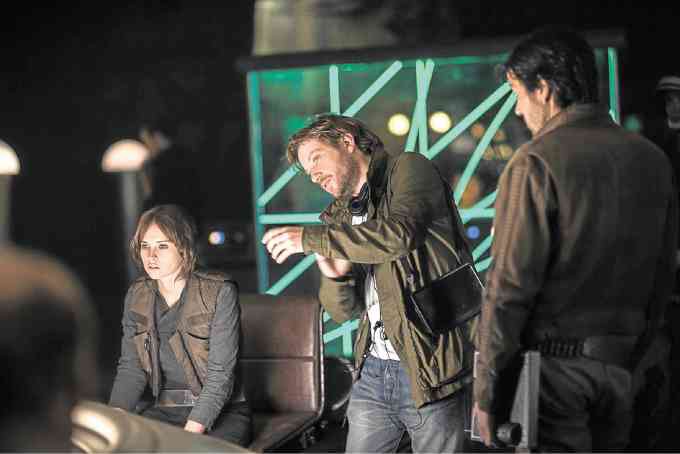 Really dug that chat and I hope you guys did, too. That's it for my Rogue One interviews. Now all that's left is to actually see the movie! I'll let you guys know my thoughts on it next week when I finally get to see the whole thing!