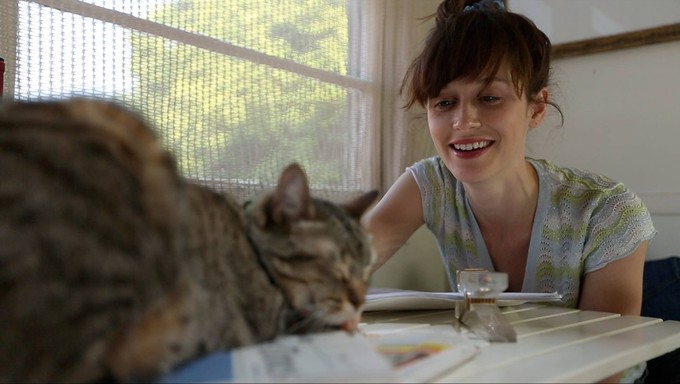 CHATTY CATTIES is a comedy that extends far beyond its initial impression. Directed by Pablo Valencia, the film focuses on Shelby (Megan Hensley), a young woman barely holding her shit together in the adult world. We’ve all known a Shelby at one point or another – that friend who just can’t seem to get their life together, who blames anyone and everyone else for their own mistakes and problems, and refuses to make any real attempt at progress.

Shelby is helped along by the support of her cat, Leonard (voiced by John Autry II). Leonard is the closest thing to a caretaker that Shelby has, given that she is horrible at taking care of herself (and horrible at taking care of Leonard, for that matter). With every disaster in her life, be it romance, job, bad day, Leonard is there to try to calm her and offer her some sage advice. It is advice rarely taken and often cut off by a rude barrage of whining, but he dispenses it regularly and honestly, and is really the only stable point in Shelby’s life. Her friends have all gone on to the bigger and better things that come with growing up and leaving your early 20s disaster years behind, but Shelby remains stagnant. She claims to be a filmmaker, but her work largely consists of films of her harassing Leonard with various toys and other objects, and she can’t seem to hold down a day job to support her art.

As the film opens, Shelby is exploring a new relationship with Nate (Matthew Grathwol). Leonard sees Nate’s presence to be a welcome addition to their lives, and encourages Shelby to maintain the connection as much as he can. After all, anything that benefits one will likely benefit both, and Leonard has little control over his own situation. As the relationship continues and the three begin to form and navigate their own bonds (yes, Nate can hear Leonard as well), it becomes increasingly clear that Shelby is stuck on a different track from the other two. Supportive though they have been with trying to help her figure her life out, all patience begins to wear thin if tried for too long, and Nate and Leonard are no exception.

CHATTY CATTIES is a very surprising film. Talking animal films are nothing new, and pets being given sarcastic voiceovers in response to the lives and conversation of the people around them might not initially strike a chord as appealing. But this film goes deeper than most, examining the nature of relationships and how they need to change and grow. We can’t stay in one place forever, and if we do, the people in our lives are likely to move on without us.

The film is made all the more interesting by the fact that the feline voices are all provided by hard of hearing actors. We spend most of our time with Leonard, but there are a few other stories that pop up, vignette style, to open a few more windows into the lives of other cats and the people they live with. Like in life, the cats carry as much (if not more) personality as their human companions, and manage to somehow declare victory in just about every situation. The voice acting cast does a great job in giving each cat its own distinct personality, and always getting in the last word.

CHATTY CATTIES is a thoughtful examination of relationships and the work that must be put in to maintaining them. People change and grow, and as they do, so does their interpersonal dynamic. The film also is a solid reminder that our animal companions have just as many thoughts and feelings as we do, and more often than not, they are exactly right and we are idiots. Remember that, the next time it looks like your cat is judging you – they probably are, and you probably deserve it.