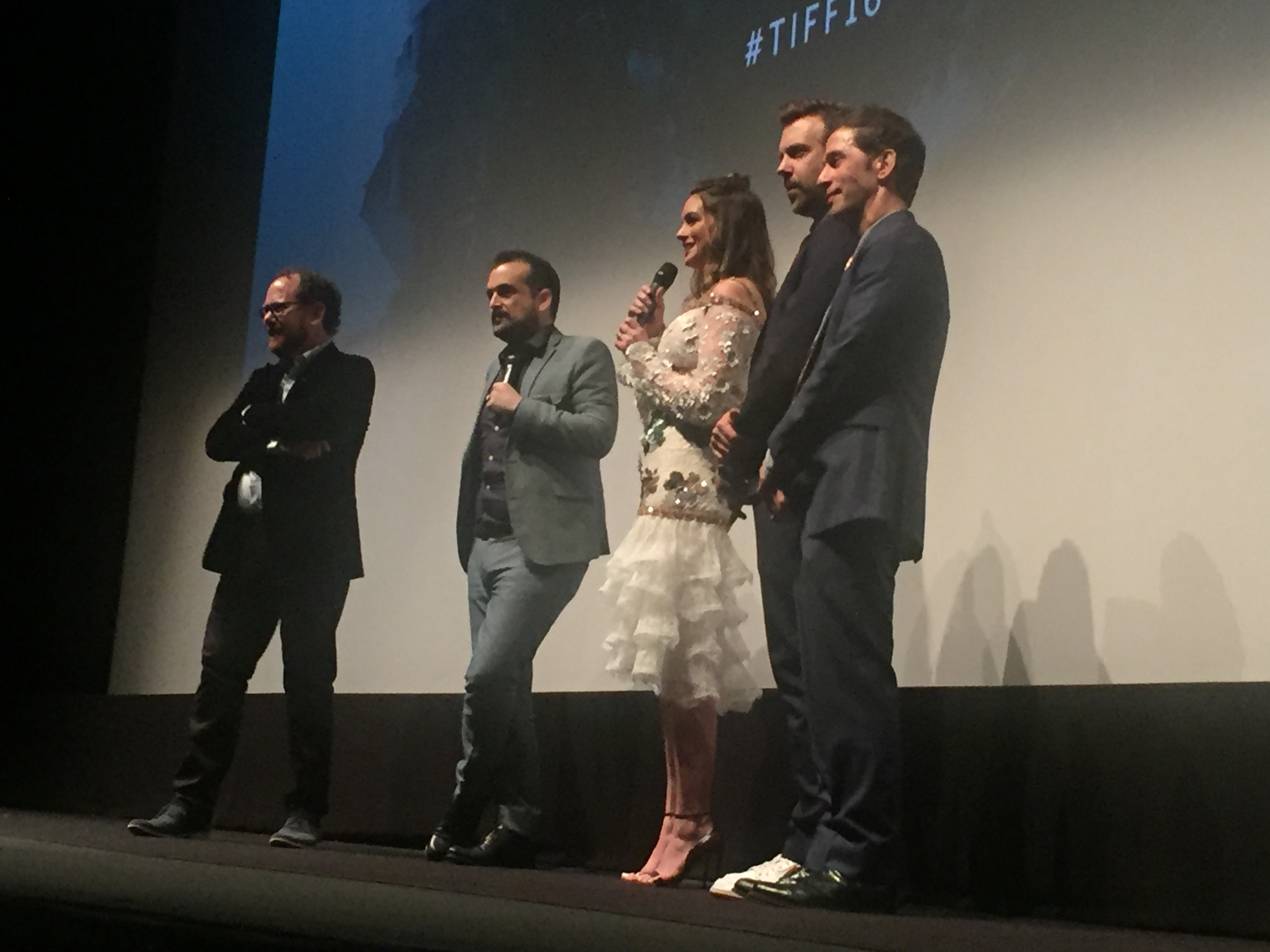 My favorite film of TIFF so far is Nacho Vigalondo’s COLOSSAL.  Nacho’s work can be hard to characterize, but let me give it a shot:  COLOSSAL is something like a giant monster romantic comedy starring Anne Hathaway and Jason Sudeikis.  Only it is also kind of the opposite of that.  Whatever you have in your head, it isn’t that.  Imagine subverting the tropes from those kinds of movies so far that they flip to the opposite, while still being better than anything in that actual genre.  Ok, the bottom line is if you try to categorize this movie, your head will explode, because it uses pieces of things we’ve seen before to build something we most certainly haven’t.  The result is one of the most fresh and innovative movies I’ve seen in years.

I don’t want to give away too much of the plot, so I’m gonna dance around the first (of many) big reveals, even though it happens somewhat early.  The first scene in the film is a little girl in South Korea who looks up and sees a giant monster, hundreds of feet tall.  But the next scene is Anne Hathaway’s Gloria arguing with her boyfriend (Dan Stevens) in their New York apartment.  It seems Gloria has a bit of a drinking problem, and just can’t find a job or get her shit together.  This scene plays just like a standard romantic comedy or drama, and it seems like a kaiju-free universe.  The boyfriend kicks Gloria out, so she has no choice but to move back to her hometown, into her parents’ vacated house.  There she runs into a childhood friend, and bar owner, played by Jason Sudeikis.  The two get to reconnecting, and before long Gloria is hanging out at the bar with other barflies, played by Tim Blake Nelson and Austin Stowell.  But then something crazy happens.  One day, after drinking all night, she wakes up to check the news, only to find that a giant monster has attacked Seoul.  These two stories — Seoul attacks, and small-town bar life, go on in parallel, but I won’t reveal how they come together.  How they do though is hilarious and absurdly inventive.  Let’s just say that giant monsters serve as a metaphor for drinking, relationship, and personality problems, and leave it at that.

COLOSSAL is a perfect movie.  It is so creative, and so far out of left field, that you can’t help but have a smile on your face as each new twist happens.  And just when you get the feel of it, just when you think you’ve got the metaphors figured out, it zigs instead of zags, and something completely new and unexpected happens.  The movie builds to such genius heights that I thought that surely it would fizzle on the ending.  I just could not figure out how they could possibly bring it to a satisfying conclusion.  I mean I’ve seen tons of small-town movies, tons of romantic comedies, and tons of giant monster movies.  There are only so many ways they can go, right?  Wrong.  I didn’t see the climax coming, and it was perfect.  And to top it off, the final exchange before the film cuts to black just takes it to another level.

How in hell did this movie get made?  At the premiere, Nacho said he was discussing the script he wrote at FANTASTIC FEST (and he’s a regular — I’ve seen him there), and word got back to him that Anne Hathaway might be interested in something like that.  From her perspective, she said she had just seen Ben Wheatley’s A FIELD IN ENGLAND, and wanted to make a movie like that (side note, Ben Wheatley had just screened FREE FIRE the night before in the same theater).  Somebody gave her the script for COLOSSAL, and she loved it.  After that she sort of discovered Nacho Vigalondo as a director, and then met him, and she described it as a mutual love affair.  Subsequently, Jason Sudeikis read the script, looked up Nacho’s short films on iTunes, and decided he was in.  On set, he and Tim Blake Nelson were talking, and Tim discovered that Jason had never seen Vigalondo’s first feature TIMECRIMES.  But Tim had never seen the shorts.

The message here is that, while he’s beloved in Austin and certain film circles, Nacho Vigalondo remains largely undiscovered by the general public.  That’s not going to be true for long.  I have no idea if COLOSSAL will find a large audience (God I hope so), but it almost doesn’t matter.  Like James Gunn’s SUPER, which tells a superhero movie with strong characters, comedy, heart and a dash of insanity, COLOSSAL makes it very clear that Vigalondo as a superstar director who could manage the biggest tentpoles.  I’m not sure I want him to go the Marvel route like Gunn though, as much as I love GUARDIANS OF THE GALAXY.  Nacho Vigalondo is just too wonderfully insane to have his genius shackled by a studio.

Everything works here.  It had the right budget and cast to pull off the vision.  Anne Hathaway will put asses in the seats.  Of course she’s great, but we knew that.  I’ve always loved the comedy of Jason Sudeikis, but his role here is played remarkably straight.  That isn’t to say it is one-dimensional though, because it isn’t.  He has to do some real acting, and man, that guy is good.  I imagine we’ll be seeing him in many more dramatic roles in the future.

Just one final shout-out — the music of Bear McCreary is a wonderful addition.  I don’t know how you unite such disparate universes as exist in this film, but somehow he did.  He’s got plenty of experience accentuating genre drama, with BATTLESTAR GALACTICA, AGENTS OF SHIELD, THE WALKING DEAD, and the like.  I’m glad to see he’s keeping it up in the film world too.

Just go see COLOSSAL.  I can’t explain it, but if you’re reading this site, I’m pretty sure you’re going to love it.