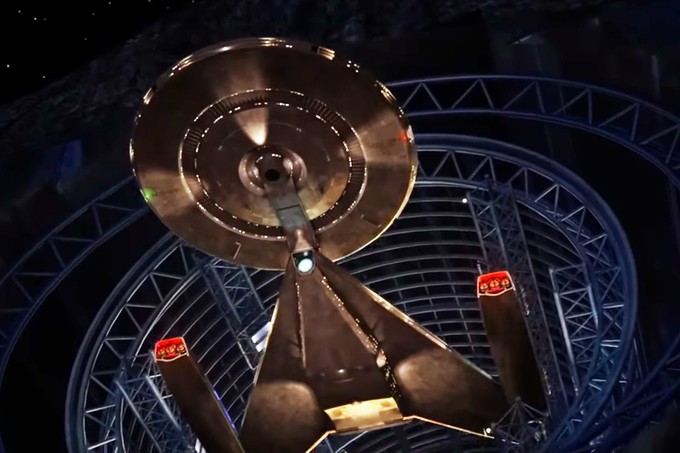 * “Star Trek Discovery’s” lead character, whom we learned earlier this month would be a female, human non-captain Starfleet officer, will be referred to in the series as “Number One,” showrunner Bryan Fuller told me during a radio chat late Saturday.  "When we introduce our protagonist, she is called 'Number One' in honor of Majel Barrett's character in the original pilot ["The Cage," which starred Jeffrey Hunter as Capt. Christopher Pike].  And as we were first talking about the series, talking to CBS, we said intially we will only call this character Number One."  Fuller added that we will learn Number One's real name before the end of the first season.

* Also? The first season of “Star Trek Discovery,” which begins airing in January, will boast only 13 episodes (the shortest live-action season of Star Trek ever produced), but Fuller told me during the same KERN-FM interview he would prefer to produce only 10 “Star Trek Discovery” episodes per year. (Note that Fuller’s other upcoming series, Starz’ “American Gods,” will comprise only nine first-season episodes. And we've only gotten 10 episodes of "Game of Thrones" per year.)

* Fuller has hired co-showrunners on the new Trek series in the form of writing team Gretchen Berg & Aaron Harberts, who worked with Fuller on “Wonderfalls” and “Pushing Daisies.” (The duo’s other credits include “Roswell,” “Revenge” and “Reign.”)

* Jesse Alexander (“Alias,” “Heroes,” “Hannibal”) has joined the “Star Trek Discovery” writing staff. So has a TV newcomer, author/playwright Kemp Powers (“The Shooting,” “One Night in Miami”).  Fuller calls Alexander "the best genre storybreaker that I've ever worked with in my career."

* Fuller described TNG/DS9/Voyager/Discovery writer Joe Menosky (“Time’s Arrow,” “Year of Hell”) as Fuller’s “mentor” when Fuller was getting his start as a writer on “Star Trek: Voyager.” ( Back in June we learned Menosky, Star Trek novelist Kristen Beyer and TV vet Aron Eli Coleite – the latter worked with Fuller and Alexander on NBC’s “Heroes” -- are all also on the “Star Trek Discovery” writing staff.)

* Also discussed was the decision to set "Discovery" in the so-called Prime (William Shatner) timeline rather than the newer movies' Kelvin (Chris Pine) timeline.  "Really when we developed the story it could take place in either Prime or Kelvin so the timeline was relatively inconsequential.  But there was the cleanliness of keeping our series independent of the films.  That way we don't have to track anything [happening in the movie universe] and they don't have to track what we're doing.  And you can have two distinct universes -- one where Sulu is straight and one where Sulu is gay."

* Thirteen "Discovery" episodes have been ordered for 2017; is there any chance of getting a 14th that year?  "Probably unlikely," said Fuller, "but there's -- things change weekly and you never know how the wind's going to blow."

* If CBS chief Les Moonves picked up the phone and asked Fuller to produce 26 episodes for 2018, would Fuller say, "Sure"?  Says the showrunner: "I would strongly recommend that we never do 26 episodes.  I think it would fatigue the show.  Ideally I would like to do 10 episodes.  I think that's a tighter story."

Will this be the rare season of Star Trek without time travel?  "I guess [we're not using time travel in season one]?" he laughed.  "I'm going through all the plots for this season [in my head] ..."

It's still early days for the "Discovery" wrriters room.  "We have the first three scripts [completed] and then we have outlines for [hours] four and five," explained Fuller.   "We know what the story is for episode 11 and it's one of my favorites for the season."

But no time machines?  "Not yet," said Fuller  "We haven't broken [episode 11] thoroughly. You never know when you want to pull out that device but I am not anticipating an over-reliance on time travel to tell this season's stories."

"We'll probably have some [casting] announcements in October," said Fuller. "We've met with fantastic actors and of course there are people I've worked with before that I'd love to see on Star Trek. We're trying to figure out everybody's schedules."

Will the "Star Trek Discovery" musical title theme be familiar to us or something entirely new?  "That's still under discussion," allowed Fuller.

Want to hear my chat with Fuller for yourself? It took up nearly the entire first hour of the Aug. 27 edition of my weekly KERN-FM radio show “Nerd World Report.” Those who care to listen to the whole thing will find it here.