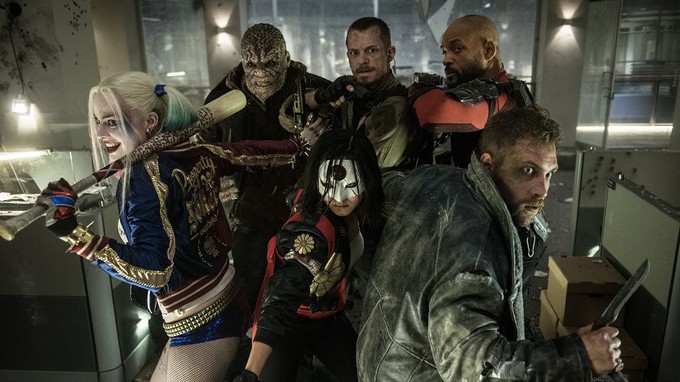 Ahoy, squirts! Quint here. Suicide Squad's an interesting movie to break down. Don't believe any “it's great!” or “it sucks” reviews. The movie is unquestionably a mixed bag and depending on how much stock you put into different aspects of a film you'll either tip positive or negative.

If it's more important to you that a movie look good than to make any sense on a story and character level then you'll overlook the ridiculous amount of plot holes and scenes happening just because. Conversely, if you put more stock in a coherent script then you might not give this film credit for it's insanely good casting and fun characters.

It might sound like a contradiction to say the film doesn't make sense on a character level and also have charming, awesome characters, but it really isn't. Go see the movie, you'll see. Character relationships and arcs largely are made out of convenience. Some characters are introduced two or three times, others just randomly show up. That's either a basic script problem or some artifact of a mid-stream change.

But every single member of the Squad is executed well on a scene by scene basis. Well, mostly. They all do well, but some are more consistent than others.

Margot Robbie's Harley Quinn is all-time stuff and if the rest of the movie was great around her she'd be as big as Ledger's Joker was. Quinn gets a lot of inner turmoil and some heavy emotion to play beneath the smiling face of insane giddiness. Everything is a weapon for her, including her sexuality. It's a dangerous line to walk to pull that off without making the character something solely for the male gaze, but she does it. 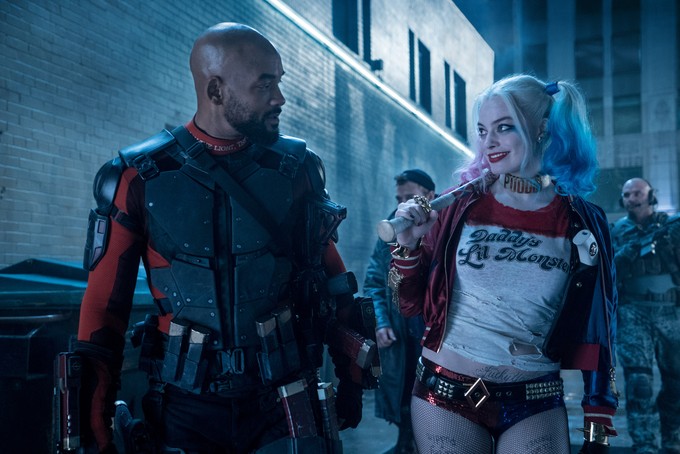 Will Smith's Deadshot gets the most dramatic range. Yeah, he might be a cold-blooded assassin, but he's also a family man who not only wants to provide for his daughter, he actually gives a shit that she might get to see him as anything but a villain. He'd prefer just to be daddy, but if he gets to do something heroic then he'll take it.

Jay Hernandez's Diablo was probably the biggest surprise for me as I knew very little about this character going in. He's a bad guy who stopped being a bad guy before the Squad is formed. He doesn't fight. He plays his character like a warrior monk who has taken a vow of non-violence and his backstory is one of the most touching (and dark) of all of them.

Jai Courtney is the most charismatic he's ever been as Boomerang. This guy is the violent thief that only really cares about A#1. He gets one note to play, but he plays it well and entertainingly.

Adewale Akinnuoye-Agbaje's Killer Croc is the brooding silent type... who happens to look like a crocodile. His make-up is insanely good. Croc spends most of the movie in the background, but I fully bought this half-human half-reptile within 20 seconds of meeting him so they did something right here.

Cara Delevigne is Enchantress, a super creepy witch who possessed the body of archeologist June Moone. I have some issues with this character, but early on she was my favorite. The transition between June and Enchantress is straight up J-horror creepy. Unfortunately the script demands her character turn into something that reminded me of the '80s Masters of the Universe movie, but not in a good way.

Joel Kinnaman's Rick Flag was serviceable, but pretty uninteresting to me. The character is the non-metahuman military presence to keep the Squad on task. He also happens to be madly in love with June Moone and has a vested interest in keeping an eye on her. Kinnaman is just vanilla to me as a screen presence and he doesn't change my mind in this movie. He's not bad at all, just kind of there.

Karen Fukuhara's Katana is pretty much just Miho from Sin City, except with a cooler sword. She's not given much screen time and is kind of just thrown in with the group after a first act that is nothing but character introductions and backstory. Not for her, though. We get a quick scene and some exposition but only after she pops up in a “oh, and we have one more” way right before the Squad goes out on their first mission.

Same can be said of Adam Beach's Slipknot. If you wonder why you haven't seen much of this character in the TV spots and posters... well, there's a reason. He doesn't get much to do, let's just leave it at that.

Jared Leto's Joker... Okay. Here's the thing. Don't expect a lot of him in the movie. If you've seen the TV spots and trailers you've seen roughly 80% of his role in this movie. I'm not sure what I expected going into the film, but the first impression in still form was really negative and I've softened on it with the trailers. What's weird is I expected that love him or hate him I'd have a strong reaction either way, but I weirdly didn't. I think he's fine. That's about it. He's pretty surface level here and doesn't get a scene as good as Ledger's “Know how I got these scars?” scene. Either of them.

Maybe some of the reason he didn't make much of an impact on me is the way they just kind of throw him in the movie. Early on we're suddenly jolted into a flashback that shows Dr. Harleen Quinzel falling for him at Arkham. And it's just a two shot profile of them sitting at a table in bright daylight. There's no myth building here, no grand entrance. I admire the thought, but in retrospect I think it hurt the character a little bit. 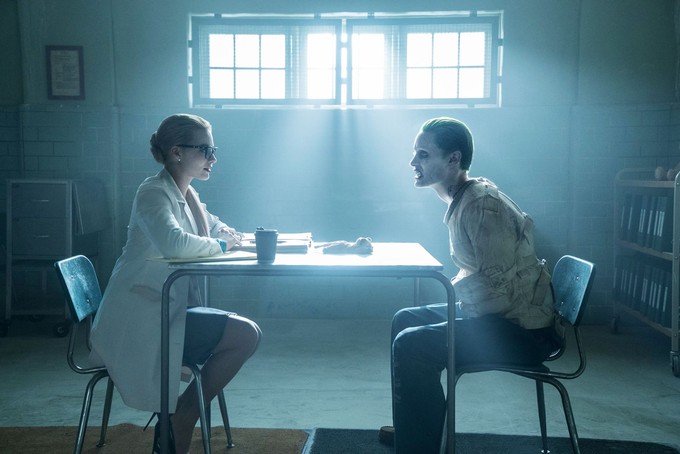 I would love to hear Ayer or someone discussing the editing decisions made in this movie, particularly in the first act. Before the title we meet Deadshot and Harley. Then we get the title... and meet them again. And then there's a “roster” scene as Viola Davis runs through each member of the team she wants to put together with Stranger Things' David Harbour and we get mini-origin stories told in flashback.

Why they chose to introduce and re-introduce the main characters is puzzling to me. It's choppy and makes the film almost feel out of order, a feeling complicated when they throw in Slipknot and Katana without any sort of introduction 30 minutes into the movie.

The film is frustrating in that it had some of the most important elements of this kind of movie perfectly in place and then didn't run with it. Their mission isn't all that engaging, but it didn't have to be. What had to work were the characters on that journey and you can see the beginnings of some smart work there.

These guys are fighting, but only because they have to. Each one is looking for an escape, which automatically leads interesting character conflict. If Flag dies, they all die, so even though each one of these villains hates him, they end up having to protect him. That's good character conflict. If you want a film that does this as perfectly as it can be done seek out Bogart's Sahara in which a WW2 allied tank battalion takes in some POWs and has to try to survive together in the water-less desert with the Nazis all around them. In that film the POWs are at once engaging their enemies on a human level and also coldly calculating their escape. Assault on Precinct 13 is another good one where good guys and bad guys team up for a common goal.

If the movie had tried, maybe, for a tone like Sahara except with supervillains I think this could possibly have been my favorite superhero movie of the year, but the goofy villain plot and confounding editing kept that movie from happening despite the sheer level of star power and charisma on display.

There's a lot to talk about with the finale, too, but I don't want to get into spoilers. The whole thing doesn't make a damn bit of a sense to me and it should have been the Squad finally working together as a good team moment but instead was just a jumble of scenes of various members taking cover or getting into close quarters combat with a villain that didn't need to engage that way.

I'm not in the know enough to tell you why the film is as sloppy as it is. It could be David Ayer's fault or it could be the best he could do under a committee giving conflicting notes. Or it could be something in-between. Whatever the explanation, the final product feels like a jumble of scenes thrown into a randomizer program and spit out into an Avid. There's very little rhyme or reason to how the story flows, when a flashback is thrown in or what the motivations of the villains are (or really what the hell they're doing other than opening up another sky butthole that'll end mankind).

What I'm left with is a movie that is beautifully shot, impeccably cast and frustratingly incoherent. It has some kind of energy from the character interactions, but the choppy editing can't really sustain it. I would say I'd be happy to see them keep pumping out these movies just to keep revisiting these characters, but I can't really give this one a pass on the strength of Will Smith and Margot Robbie's charisma. They make me want to, believe you me, but the story just doesn't support it, sadly. 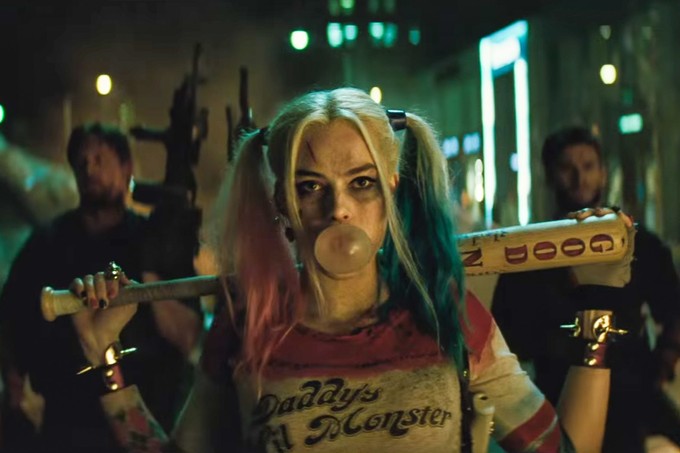 I'm excited to see what kind of role Harley plays in future DCEU movies, in part because Robbie's so good in the role, but also because I like Leto's Joker more through her eyes than just as he is. Harley's crazy Mister J is way more interesting to me than the nightclub frequenting gangster we see for the rest of his time and his complicated love for her gives Leto an angle to play with Joker that we haven't seen done in live action yet.

Anyway, those are my thoughts. It's not a Fantastic Four level disaster, but I almost want to rag on it even more for having so many good elements in place and squandering them.

You may disagree and that's cool. There's enough cool stuff in here that I get it, but I wanted there to be a better script and story for these awesome actors to play with and will always see this as a missed opportunity.