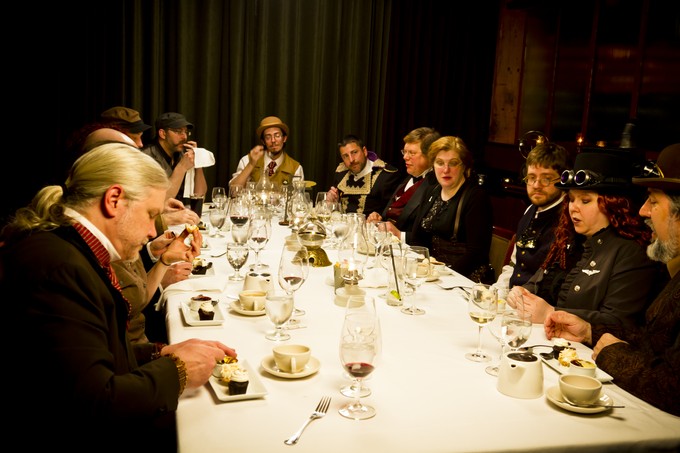 VINTAGE TOMORROWS is a documentary that takes the viewer into the imaginative, beautiful world of Steampunk. Deriving its name from the industrial age and taking cues from the Victorian era, Steampunk’s roots can be found in the science fiction and the vision of the late 19th century - when machines were big, the impossible was more than possible, and we were exploring the boundaries of our imaginations. This documentary focuses on its many genesis points and its path forward by examining many aspects of the culture, and learning just what makes Steampunk special from the people who populate its ranks.

Taking cues from the book of the same name by James Carrott and Brian David Johnson, the film examines Steampunk within the context of being the intersection of history and future. Our past, and where that past takes us. Learning where we have come from, and adding imagination to see where that can lead us. The interview subjects note that much of the allure comes from the optimistic and creative future presented in Victorian times. Though technology and science are moving much faster than today than they have in the past, making our thoughts and ideas that much closer to reality, there is something more soulless about it - particularly when you turn to science fiction. Victorian era sci-fi was about exploring the possibilities, and today, we write about how our technology will eventually be our undoing. Endless possibilities vs a doomed future. It is that optimism, combined with creativity and innovation that draws many people to this community.

Naturally, when people think of Steampunk, they almost always conjure an image of the amazing clothing. And while the film does spend a chunk of time delving into the aesthetic choices of its practitioners and the connection that the movement has to cosplay, it also spends a good deal of time highlighting the many other stylistic elements that contribute to Steampunk is - from the fashion to the fiction to the music to the philosophy and beyond. It quickly becomes apparent that Steampunk is much much more than a corset and a pair of goggles (though corsets and goggles are awesome), and that every aspect of this subculture is there for a reason and has a resonance to those who embrace it.

Interviewees include a number of authors whose work has been a pivotal part of the movement, including William Gibson and Bruce Sterling, Cory Doctorow, China Miéville and many others. One of the more interesting aspects of this documentary is that in addition to the standard one-on-one interviews, there is also footage from a gathering of creators in the community coming together to discuss Steampunk and its influence and impact. We get the opportunity hear their thoughts on a variety of different subjects related to the culture, but within the framework of a discussion rather than a traditional question and answer.

Interestingly, the film also takes the time to acknowledge and discuss some of the more problematic aspects of the culture. For instance, the fact that the timeframe from which steampunk draws its inspiration was not a flawless period in human history. Poor working conditions, colonialism, prejudices of all varieties and a lack of rights for women are just some of the political aspects that made the Victorian era less than ideal. Which leads many people to examine whether Steampunk is the realm of the privileged and if they are missing the darker aspects of that point in time. Some of the interview subjects discuss this, along with ways they have found to circumvent these issues and make Steampunk more inclusive for all.

For the Steampunk practitioner, there is a lot to love and to connect with, as director Byrd McDonald explores the myriad of layers that make this movement beautiful. And for the novice, it is a fascinating journey through and education of a culture that is much much more than goggles and gears. It's bigger than a cosplay pastime, bigger than a literary movement, bigger than an aesthetic - it is a cultural movement.