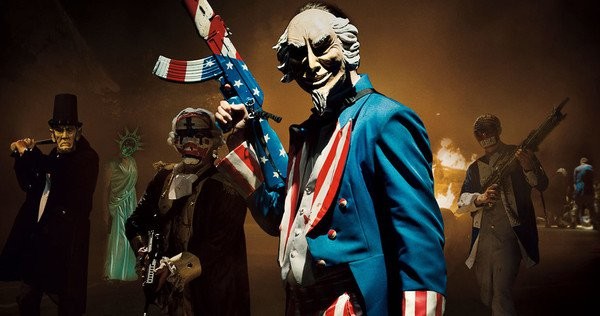 THE PURGE series has proven itself to be one of the most interesting horror franchises of the decade. Starting in 2013 with the original film, which was little more than a siege tale with an interesting backstory, the concept grew to become one of the most talked-about, socially charged horror tales in recent memory.

The notion of a night where all crime is legal offers up some interesting food for thought, and though director James DeMonaco employs a very ham-fisted approach, it is fascinating, nonetheless. He does some interesting things with this concept, and uses it to explore the socio-political nature of the premise. In the world of THE PURGE, we see just how this night is utilized by the wealthy and the powerful to keep the poor in check. The crime rate touted at the beginning of each film isn’t low because the populace has a yearly opportunity to expel their violent impulses – it is low because it is kept under control by the yearly extermination of the impoverished community. In the process, it lines the pockets of politicians, insurance companies and major corporations. Yes, it’s political science 101, but whoever said a concept had to be elegant in order to have an impact?

THE PURGE: ELECTION YEAR, joins back up with Leo (Frank Grillo), our reluctant hero from the previous film. He has been hired as security chief to protect Senator Charlie Roan (Elizabeth Mitchell) during her campaign for president. The senator has gained a lot of attention over the course of the campaign with her vocal disdain for the ruling New Founding Fathers and her promise to dismantle their regime and put and end to Purge Night, should she reach the White House. To the poor, she is a beacon of light. Someone who will stand for them and enact real change on a system that was intentionally built against them. Though many believe her words to be too good to be true, she strikes a chord nonetheless, and is giving the system the wake up call it needs. To others (most notably the New Founding Fathers), she is a blight that must be removed.

In a not terribly veiled attempt to make Purge Night their night of attack, the New Founding Fathers decree that this year, for the first year ever, government officials are not off limits during Purge hours. Nobody is safe, everyone is an equal target. When the Senator's home is compromised, she and Leo must take to the streets and try to survive the horrors of Purge Night.

Once again, DeMonaco pulls the camera back and reveals a bit more about the Night itself and the impact the Purge has. We get to see a ripple effect on how other countries view the steps that America has taken as well as the effect that having a longstanding Purge has had on the younger generation. We get a montage of the creative and horrific methods that citizens use to exercise their right to Purge, but this chapter also reveals a flipside and lets us see the people who do what they can to help during this horrific night. One of the supporting characters, Laney (Betty Gabriel), volunteers in a triage van during every Purge. She and her partner drive around and stop to help the injured and wounded wherever and however they can. We get to see the way ordinary people cope with this night that targets them and fight back against it in their own ways.

ELECTION YEAR is a great third chapter to this series. It ups the ante and delivers a tight, engaging story that is very timely, given the crazy that has sprung up on the American political stage. Some of that was likely intentional, some of it less so, but it's hard to deny that this film is firmly of this era. As the political climate in the United States has intensified, THE PURGE films have very much found a home as a reflection of our present, and a terrifying window into a possible, not so unimaginable future. ELECTION YEAR reflects much of battle that is currently being fought between those in power and those just trying to survive. It will be interesting to see how these films are viewed decades from now, as viewers draw lines between fact and fiction. Hopefully, we're not saying how eerily prophetic these films were, and crying over how we should have seen the signs before the political apocalypse happened.

But in the meantime, James DeMonaco has once again delivered an entertaining film that sparks as much conversation about its premise as it does about its story. ELECTION YEAR succeeds in driving the narrative even further while also filling in more backstory to keep its fans talking. This is a series that certainly finds itself improving with every entry, and ELECTION YEAR is not to be missed.