Quint's review of THE CONJURING 2, Or: Why James Wan is a gift to genre fans!

Ahoy, squirts! Quint here with a few words on James Wan's The Conjuring 2. Forgive the tardiness of this review. I've been traveling for 20+ hours and also needed to find some time to sleep in the last two days as well.

We horror fans don't really deserve James Wan. Let's get that out of the way up front. So much of the genre fare we've had in recent years has been amateurs feeling around in the dark or shitty studio schlock. What Wan has managed to do with the two Conjuring films is remind us that it is possible to bring precise craft and visual storytelling to genre and still scare the fuck out of people.

There's a teeny tiny sweet spot in studio horror where you take the story seriously and also know how to have fun with the audience. Wan is pretty much Hawkeye at this point. He knows how to hit that small and constantly moving sweet spot and there's no more proof you need than his sequel to The Conjuring.

When you watch this film, pay attention to the craft at work. Watch how Wan moves the camera, how he lingers (or doesn't) on a shot to crank up the tension, how he'll misdirect you and sucker punch you with a scare, how he'll use negative space to put on edge.

On a technical level, The Conjuring 2 is a masterclass and I will fight anybody who claims otherwise. The horror imagery on display is first class stuff, rooted in character. What looked like an eye-rolling Marilyn Manson As A Nun Halloween Costume in the marketing is actually damn scary in the movie. There's a reason for that imagery beyond “wouldn't it be creepy if...” as well, which I appreciated. 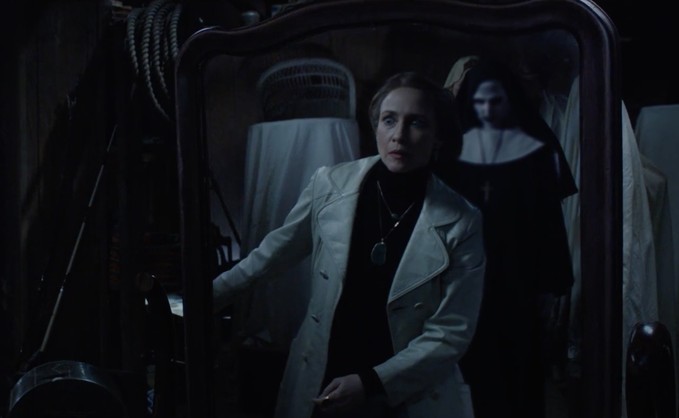 The first Conjuring is a little bit more solid in terms of emotional connection to the family in peril. I cared a bit more for Lili Taylor and her family and was more invested in the mythology surrounding that paranormal experience.

That's not to say thee Enfield case isn't stupid, by any means. Young Madison Wolfe is pretty fantastic as the main girl being tormented by something evil. It's incredibly easy to empathize with her and feel scared for her as she's put through hell.

I liked her siblings as well, but I think the only misstep with this new family dynamic is I never really cared for the mom, played by Frances O'Connor. I don't think it was O'Connor's fault, really. You might remember her as the mom from A.I. (a significantly more nuanced and heart-breakingly written mom character). She's good, but as written her character is definitely the weak spot of the new family, something that absolutely can't be said about the original.

She's just not given much to do besides disbelieve her daughter until she can't anymore and then all she does is look scared whereas the kids all get a little time to bond with the Warrens. They get a chance to explore different variations of their personas, whether it's showing vulnerability and asking for help or having a brief moment of happiness in the dark world that surrounds them. Perhaps O'Connor had a moment like that that got cut, but as it stands that's my biggest criticism of this movie, underlined broadly considering just how strong Lili Taylor was in the original.

Vera Farmiga and Patrick Wilson are still fun to watch as Lorraine and Ed Warren. In fact, if I could sign up for a yearly movie following their ghostbusting adventures I'd do it. They're grounded enough that you overlook some of the more melodramatic dialogue they have. You just kinda root for these guys to succeed and care about the personal toll these cases take on them. 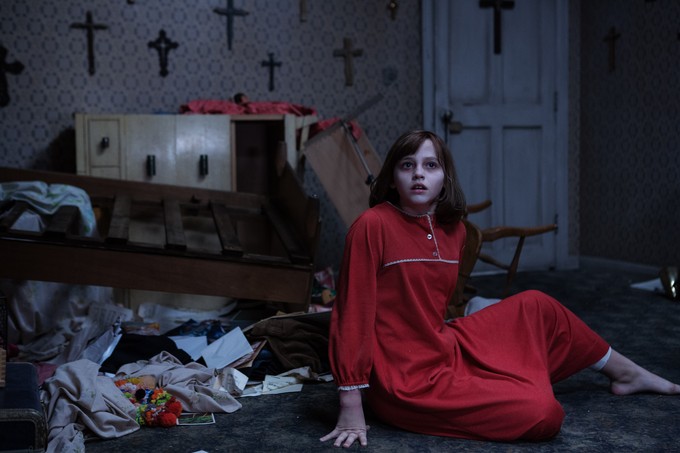 It can't be stressed enough just how solid this movie is on a technical level. Cinematography, camerawork, production design, lighting, costuming, score and editing are all top notch, which only serves as a reminder that horror doesn't always have to be cheap and dirty. Studio horror is a bit of a lost art these days. Most good genre comes out of the indie world. We don't often get a US The Ring or The Conjuring because studios have it in their mind that horror works better with a tiny budget.

To some degree that logic isn't awful. The more creativity forced through limited resources, the more the sharp minds behind the camera have to push themselves to tell their story in the most effective way possible. But the budgets have gotten so low recently that production design is the first thing out the window. Studios became obsessed with found footage not because they were intrigued by the aesthetic, it's that they could pump these things out for six figures and sell it like they'd usually sell their $10m horror movies.

And that brings us back to James Wan, who has made the down and dirty horror film before, but even Saw was full of production value. The man has a great eye and the more he pushes for genre to be done up right the better it is for us genre fans.

We'll always get low budget schlockers, and many of them are going to be fucking awesome, but I'm personally relishing the return of higher budget/production value supernatural horror and hope that wave lasts for a while.