Harry plans to watch WARCRAFT a lot more than the average critic!!! 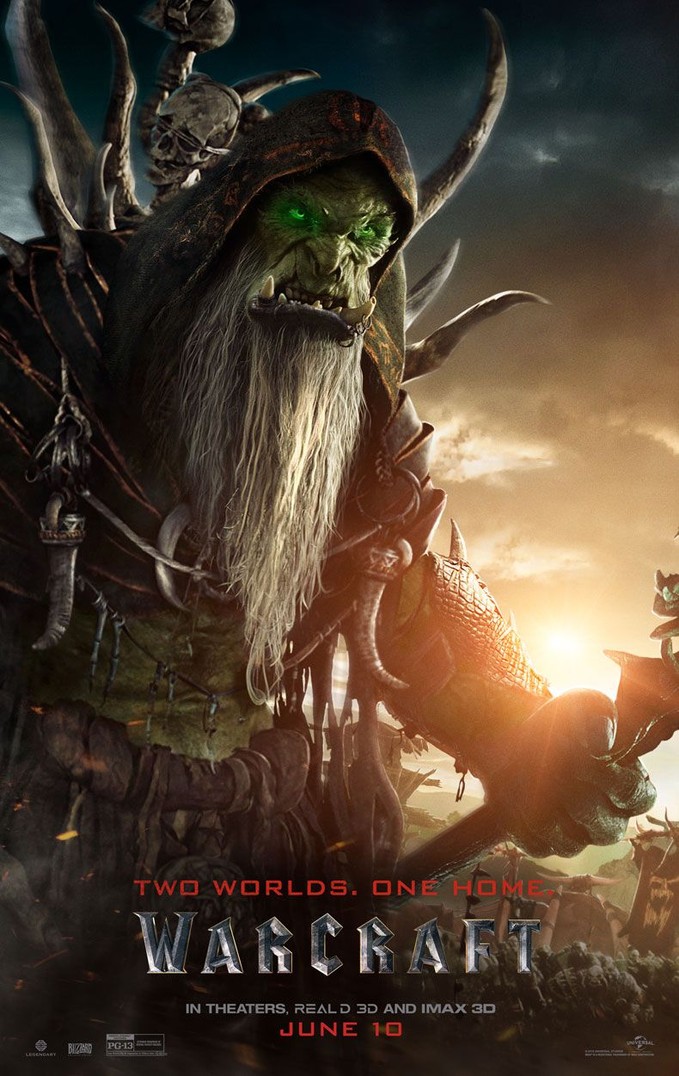 I’ve never played a second of WARCRAFT, but the reason is because I know I’d lose myself in the game.  I’ve had friends that became obsessive, I lost a girlfriend to that world and I married Yoko who has a very specific fetish for a specific iteration of the game.   BUT – I know elements of the world – because I love fantasy art.  And the World of Warcraft is rich with imagery.

The film has been much maligned by critics and I’m not sure if I can grasp why.  I saw one that compared the imagery in the film to Frank Frazetta, but that just underlined that critic’s shallow grasp of Frazetta’s actual artwork.   WARCRAFT is not Frazetta.  It is WARCRAFT – it is a very specific style and aesthetic.   It is also not Tolkein.   If you can only discuss fantasy with words like Frazetta and Tolkein…  then perhaps this isn’t for you.

For me, Fantasy is a wide open realm of which we’ve only had a sliver of access to cinematically.  Duncan Jones’ WARCRAFT – will plunge you head first into his vision of the World of Warcraft.  Visually, this is entirely different from Peter Jackson’s films, the Narnia films, Harry Potter or any of the modern attempts at fantasy.   From the get go, this is Duncan saying, sit back… put your feet up… for the tale I’m about to tell all began here upon this screen.

Duncan isn’t interested in making a film about just the Alliance, which from the movie seems to be a united group of character types ranging from humans to dwarves to elves to…  well, a whole bunch of other critters I didn’t immediately recognize.  They ride horses and motherfucking griffins.   Now, I know… Harry Potter rode a griffin, but griffins begin with GOLDEN VOYAGE OF SINBAD for me – and having a griffin means a lack of long marching scenes to various locales.   It means you can soar off camera and then soar back into a different fabulous locale.   Nor is Duncan interested in making the stranger more savage looking races of WARCRAFT seem drastically inhuman.  The Orc clans have animals they care for, families and dream of better times.  This is the reality of war – and it is wonderfully shown here, and you better believe WARCRAFT moves.

We begin the film with a narration over a single Alliance fighter versus a single Horde Orc – and it ends with a feeling that the Alliance guy got crushed like a Coke can.   From there… we go to the Orc homeworld, where an enormous gathering which will lead to the first conflict between the Horde and the Alliance.  They’ve got this enormous portal that is powered by the lifespirits of caged prisoners they suck out to power the Fell magic.

Now I’m gonna stop here – because this shit is seriously cool.  For a long time I’ve been wanting full blown SORCERY unleashed on screen.  And I’m talking the kinda magic wielding that puts DeMille’s Moses to shame.   Gul’Dan is played by Daniel Wu, but you’d never guess there was an ounce of human to him.   He seems to be a gnarled twisted emperor type – you go on thinking that way… you’ll see.   Gul’Dan is evil with relish.   Twisted like some bizarre Orc Skeksis combo from hell.  His Fell glowing eyes are pure unearthly creeps.   At this point in the story, he’s the hero to his people – finding them a new home to sustain them… but oh the price.

We meet Durotan here, who is the soul of the film for me.  He’s played by Toby Kebbell, but he’s invisible as the character here.  In reality, Toby is a more gaunt human being, through the magic of the film, he becomes something quite a bit substantial.  We’ve never seen an Orc of this temperment.  He isn’t all rage and angst and fury.  Durotan is a father to be, when we first meet him.  He has a sense of humor, but more than that – he has a nostalgia for the days before Fell magic destroyed their world – and while he’s delighted to see this new world, he sees that Gul’Dan is set to just do more of the same.  Innocent deaths diminish him.  He’s highly honorable and has the capacity to recognize evil amongst his own tribes and seeks an alliance with  those they intuitively would be at war with.

While I’m on the Horde side of things, I have to say – I fucking love this film.  Too often in these kinds of stories you have the good guys and the bad guys.   It’s always back to the Westerns or Crusade stories – and it’s almost always from the Good Guy perspective, but if there’s one thing that reality teaches us…  Bad Guys can act like Good Guys.   It’s never as simple as ALL THOSE KIND ARE EVIL AND SHOULD BE DESTROYED.  Even thinking in that manner is horrifyingly destructive.

Here – we learn that in this Fantasy-verse – The Orcs are here to save their kind, but that’s coming at the expense of our Human-Dwarf-Elf-kind, because their leader needs victims to suck the lifeforce out of for Fell purposes.   BUT – we’ll learn that this evil Gul’Dan was summoned and taught his Fell ways – and once you go Fell, it takes a powerful soul to come back.

Now some seem to have trouble with the casting of the film, I disagree.   I mean, anyone that has discovered Travis Fimmel, who plays Ragnar on the History Channel’s superb VIKING series…  well, by the time he’s facing off against Clancy “motherfuckin” Brown’s BLACKHAND…  he’s become a star to me on this big ass IMAX 3D screen.   Oh – did you miss that Clancy Brown plays an amazing Orc called BLACKHAND?  He’s great in this film.

Dominic Cooper aka Howard Stark is always a welcome addition – when you see his Llane Wrynn in that Oliver Stone’s ALEXANDER-esque Lion’s Head Helmet – only this helmet looks so much cooler…   Well, I’m pretty sure I’ve never seen Dominic Cooper kick this much ass before.  Oh sure, he rules the universe forever with his Uday Hussein in THE DEVIL’S DOUBLE, but here…  When he’s fighting to save his people – it’s pretty epic to me.   His wife is played by Ruth Negga as Lady Taria…  If you’ve been watching PREACHER – you’re already in love with her Tulip O’Hare – and I liked her in AGENTS OF S.H.I.E.L.D. and got a giggle that an INHUMAN was married to Howard Stark!   That said, she is underwritten.

One of the key human heroes in the film is Khadgar, played by Ben Schnetzer.  He’s had parts in PRIDE, THE BOOK THIEF, SLC PUNK 2 and will be in Oliver Stone’s SNOWDEN next.  I love his Mage character here.  He’s the human character that’s ahead of the curve, sensing something terribly wrong.   He seeks out the aid of the Guardian of Azeroth, the realm that’s being invaded, but I love his magical spells he tosses.   I’m expecting DOCTOR STRANGE to destroy all the magic stuff here – if not – I’ll put a bag of poop on that screenwriter’s doorstep.  Khadgar is terrific.  Lothar and he have solid chemistry – and when you add in Paula Patton’s Garona – a half orc character that tells us that broken bones heal stronger than they were before, then says my bones are very strong.  It’s great stuff.   I have to admit, Captain Kirk fully gave me my green girl fetish – and Paula Patton carries that model forward quite well.  The sexual tension is quite fun.

I also LOVE how the “Triangle” of Lothar, Garona and Khadgar end up in the film.   The story took twists I wasn’t expecting.

On the Orc side their relationships are a bit more complicated.  The friendship between Durotan and Orgrim Doomhammer is terrific.  Toby Kebbell and Robert Kazinsky do a great job.   I like Orgrim’s reluctance to betray a fellow Orc and how he needs to see the evil exposed for himself until he can take Durotan’s side…  but Doomhammer…  he’s got the HULK – AVENGERS fun blows of the film – only, much more brutal.   Even Clancy Brown’s BLACKHAND isn’t entirely evil, until he is.

I appreciated the texturing of the cultures beyond just Weta Workshop’s amazing design and armor they created.   The visual effects from ILM are stunning work.   You can read the emotion and nuance of the Orc characters in a way that I found delightful.  Just having the chats between Durotan and Orgrim.  Watching these characters laugh and reminisce – you haven’t seen anything quite like this.   It’s remarkable work.

The fight between Durotan and Gul’dan is one for the books to me.   OUTSTANDING STUFF!

Does it kick LORD OF THE RINGS’ ass?  Are you serious?   Is that what you’re coming in with?   LORD OF THE RINGS is 9 hours of Tolkien brilliance given life by a perfect team.   This is the first theatrical release of a film based upon a video game. This is a tale I’ve only seen and heard once, I’ve watched LORD OF THE RINGS countless times and before that I had read the novels multiple times.  I’m only as invested as a single viewing could give me.  I loved what I saw and I plan to see it a bunch.  FatherGeek and I are adamant about seeing it a few more times theatrically.   It’s just such a completely enthralling fantasy world.   That I don’t know all the actors from big movies, I’m fine with.  They’re all going places.  Ben Foster’s Medivh – the Guardian of Azeroth – I could feel some of his stuff being telegraphed, but I couldn’t wait to see how he’d pull it off.   I like him, his best work is still 3:10 TO YUMA in my book, but I’ll watch this Fantasy Crack more than that Western Crack.

I have to say – if you’ve ever rolled dice for a character sheet, if you dream of fantastic realms that are so much more vivid than our limited existence here.   Seriously – we only have HUMANS.   WTF…   Where are the other intelligent creatures to love, hate and make peace with?   For that, you must take a ticket to WARCRAFT.   At no point will you think about the current election while watching. 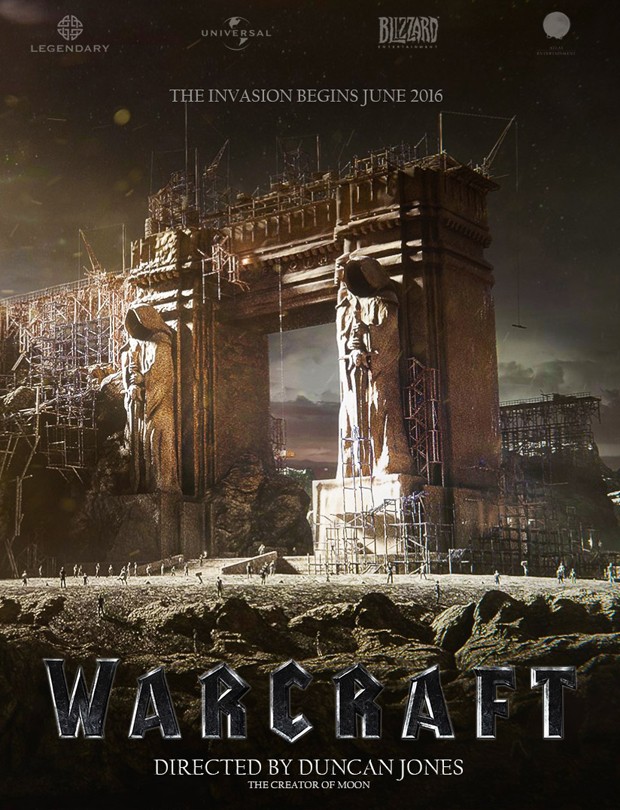