Tom Fremgen checks out ‘60’s and ‘70’s cartoons collections THE INSPECTOR, ANT & THE AARDVARK and CRAZYLEGS CRANE from Kino Lorber!

Tom Fremgen aka the Masked Man from AICN COMICS here. While nearly every animation studio was getting out of the theatrical shorts business and / or shutting down in the early 1960’s, one brand new company was just getting into the shorts business: DePatie-Freleng Enterprises! A company made from the corpse Warner Bros Animation, in fact, they even operated in the same building.

Warner Bros Animation’s last producer, David DePatie formed a partnership with famous animation director Friz Freleng to create the new studio. Then fate, and Blake Edwards, stepped in and had them created one of all time great animation characters: The Pink Panther. The animated titles they created for THE PINK PANTHER (1963) film was such a hit that distributor United Artist, and producers Mirisch Company, actually order theatrical shorts of the Pink Panther from them as well! Not only that, but they made a long time contract with Depatie-Freleng to produce a truckload of non-Pink Panther shorts as well. Didn’t they get the memo that theatrical shorts were dead!?

Well, they might have been thinking ahead to TV as well, as all the Pink Panther and ‘friends’ shorts made a quick turn-around to the small screen. The variously titled Pink Panther and Friends shows ran from 1969-1980 (short production ran from 1964- 1976). And now for the first time all these ‘Friends’ are coming to Blu-Ray, thanks to Kino Lorber! The first three collections to be released (on DVD as well) this week are, THE INSPECTOR, ANT AND THE AARDVARK and CRAZYLEGS CRANE. 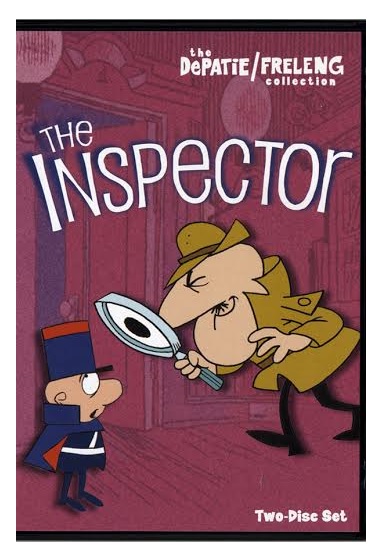 After the Pink Panther himself, THE INSPECTOR (1964-1969) was the next series of shorts. Which made sense, the since the biggest thing to come out of THE PINK PANTHER film (aside from the Pink Panther himself) was Peter Sellers’ character, Police Inspector Jacques Clouseau. These cartoons came right on the heels of the second ‘Clouseau’ movie: A SHOT IN THE DARK. They even used the Henry Mancini theme, for the film, in the shorts. Despite all specific references to Clouseau being removed, the series was a hit and the only one (aside from the Panther) to go over 17 shorts (finishing up at 34) all of which are in this collection, dvd and Blu-Ray. For ‘retro’ TV fans, one surprising thing about these cartoons is Pat Harrington, Jr. does the voice of the Inspector (and his side-kick, Sergeant Deux-Deux). Mr. Harrington is most famous for playing Schneider in ONE DAY AT A TIME for nine years, for which he won an Emmy and a Golden Globe.

I really haven’t watch THE INSPECTOR cartoons in years, but I had fond memories and could even recall a few gags. Well I’m happy to say the series still holds up. It’s clever, very funny and has great timing (which is often the key to animated slap-stick). Dealing with such villains as the Blotch and the Mad Bomber, THE INSPECTOR is genuinely funny. Artistically speaking, for a short made on the cheap, it has a really nice artistic designs and great backgrounds. This is a must have collection for any cartoon fan. 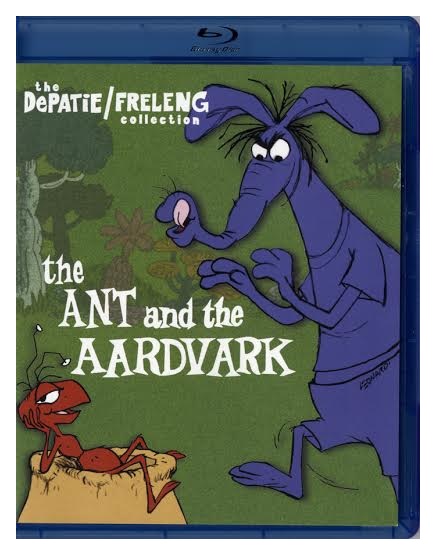 Next up is, THE ANT AND THE AARDVARK, which was the fourth series created by DePatie-Freleng. It numbers 17 shorts from 1969-1971. THE ANT AND THE AARDVARK continued the long traditions of predator / prey cartoons, where the predator comes up short every time. Though more like Bugs Bunny than the Road Runner, THE ANT AND THE AARDVARK was more about crazy wit than violence. Speaking of crazy, who would ever think to pair Dean Martin (the Ant) with Jackie Mason (the Aardvark) in cartoon? Mind you, both were voiced by the talented John Byner. Mr. Byner had a long career in TV; with a long stay on the HOLLYWOOD SQUARES, and as the host of Showtimes 1980’s comedy show, BIZARRE.

Just like THE INSPECTOR, I had dim memories of these shorts, and again just like THE INSPECTOR, it lived up to my memories. They are just silly and clever, interesting sloppy style. Most cartoons dealt with the Ant being too cool to be bothered by the Aardvark, and the Aardvark being a classic sad sack. In fact, I think you’ll probably have more sympathy for the Aardvark than any other cartoon predator. His life really seems to suck, on top of fact that he can’t catch the ant. While not quite as mandatory as THE INSPECTOR, THE ANT AND THE AARDVARK is great collection to have. 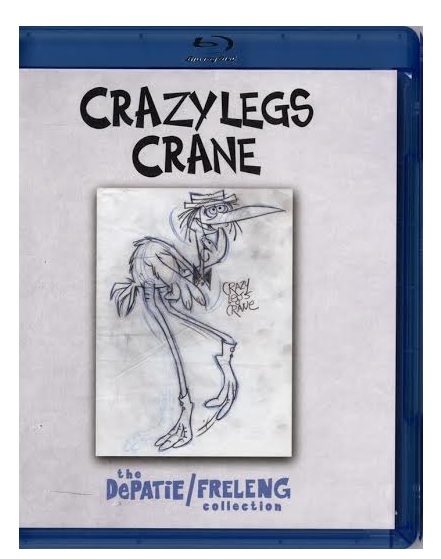 CRAZYLEGS CRANE was voiced by Hollywood vet Larry D. Mann, doing his best impersonation of the very dimwitted Mortimer Snerd (a famous ventriloquist dummy of Edgar Bergen from the 1930’s and 40’s). It was yet another predator / prey cartoon, as Crazylegs chased around a fire breathing Dragon Fly, with his very embarrassed son looking on. Unfortunately, CRAZYLEGS CRANE has very little to offer in entertainment. Maybe because it was they last series or maybe because it was made more for TV, but everything from the scripts to the art is very uninspired. In fact, it’s amusing to listen to the commentary tracks, as even they don’t have much positive things to say. So unless you’re a completist, or happen to be a fan (ain’t no shame loving what ya love), I can’t recommend this series.

One nice thing about all three collections is the bonus material! There are at least three cartoons per collection that have commentary, by the likes of animation guru Jerry Beck and THINK P!NK author Mark Arnold. Each one also has two mini-documentaries as well: One on the history of DePatie-Freleng, and one giving a combined history of the three series (THE INSPECTOR, ANT AND THE AARDVARK and CRAZYLEGS CRANE). These are both fun to watch, with interviews of former employees, plus some audio records by Fritz Freleng himself!

The video quality is quite good, in their original 4:3 screen ratio (black bars fill up your 16:9 screen). In fact the transfers quality is so good, the DVDs are just as good as the Blu-rays (though seriously, how sharp can you make a line?). Mind you, most of the disc graphics and the live-action documentaries do benefit from the Blu-ray treatment. The Blu-Ray discs even come with a reversible cover, which are a very cool original sketch of the character(s). Which is nice since my only real compliant about these collections is the package design. Just very uninspired, they almost look like discs you would find in the $5 bin at a drugstore. So don’t judge these ‘books’ by their covers.

In the coming year Kino Lorber plans to release the rest of the Pink Panther’s friends: ROLAND AND RATTFINK, TIJUANA TOADS, THE BLUE RACER, HOOT KLOOT, THE DOGFATHER and MISTERJAW. I have to say, the two I’m most looking forward to are MISTERJAWS: As I loved it as a kid, but being another made for TV cartoon, I’m curious too see if it still stands up. And TIJUANA TOADS: Which I have only seen as the TEXAS TOADS. Aside from loving these as a kid, I’m curious if Kino Lorber actual has the original Tijuana audio. As all the ethic humor was removed for TV; so they became the TEXAS TOADS.

As for now Kino Lorber’s releases of THE INSPECTOR, THE ANT AND THE AARDVARK and CRAZYLEGS CRANE are great collections of the theatrical cartoons last gasps.

Tom Fremgen is a video editor / animation artist who has worked for Nickelodeon and Sony Animation. You can view his own webtoon, CAPTAIN ROCKET AND THE GREEN THING at ToomCity.com!