Harry wrestles with BATMAN V SUPERMAN: DAWN OF JUSTICE and came up with this... 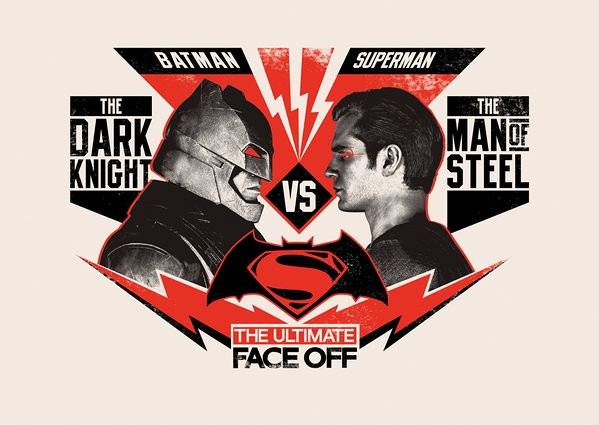 BATMAN V SUPERMAN: DAWN OF JUSTICE is a helluva first watch.   I was wanting so much more than this movie gave me – and my expectations were through the roof.   However to discuss how this film both succeeds and fails – I must dive into spoiler territory.  So if you want to skip this review until you’ve seen the film… then go right ahead.

First – let’s discuss the greatness of the film.

BATMAN.  Finally, for the very first time ever in a live action film, BATMAN is there.   The costumes move and are used properly.   The fighting style, Alfred, the Bat cave, the ramshackled Wayne Manor, Bruce Wayne waking up with some model-esque beauty passed out in his bed, going undercover as himself to discover secrets.   All of this was just delightful to see on screen.  By the time we’re in the full battle armor – I was giddy.   Very cool stuff. Ben Affleck and Jeremy Irons are a perfect Batman & Alfred and I could watch them in dozens of movies doing their thing.

WONDER WOMAN.  We don’t really get to see a whole lot of her, but if you pay close attention, you’ll see Gal Gadot’s Diana Prince wandering around in the backgrounds of several scenes.   Gal is filled with guile, mystery and a degree of Catwoman in this film.   At least that’s my take on her interactions with Bruce at Lex’s shindig.   I’m not so sure why the picture was a big deal, other than it just shows she’s an immortal – and perhaps she wants that under wraps.   We don’t get an invisible jet – and I do have some questions, like…  Was her Sword & Shield and costume in her carry on?  And if so, the Metropolis Airport Security is really really laxed.   All kidding aside, when Wonder Woman hits the screen to kick ass, that’s exactly what she does.   She handles DOOMSDAY better than either of the boys – and SUPERMAN was little more than a whipping boy – but then that is his job when faced with DOOMSDAY.

THE FIGHT BETWEEN BATMAN & SUPERMAN…   I’d rate it a solid 7 out of a possible 10.  Mainly because the fight in the animated DARK KNIGHT RETURNS is vastly superior a combat than the one in the live action feature.   That said…  was it cool?   Very much so.   However, it did feel truncated and I did wonder – why, when Superman first lays hands on BATMAN he just doesn’t open his armor up like a can of sardines.   I mean…  He’s Superman…   but then part of the problem with the film is just the mishandling of Superman’s side of the story.

Before I get into what I felt was wrong – I want you to know – this is no Schumachrian Nightmare.   We do get to see SUPERMAN, BATMAN & WONDER WOMAN all on screen together for the first time and that… all by its lonesome is a reason to celebrate.  And I am seeing the film again this weekend and hope that I come to like it more than I do – or that some of the problems I have drop to the side.

Both my nephew and Fathergeek enjoyed the film completely – and I hope now that I know what the film is – upon second viewing it’ll cease to compete with my expectations that wanted something more epic than what I got.

See, I was expecting a film that had a series of growing conflicts with Batman & Superman… but really – there’s just the one.   They come face to face before that, but it’s dreams and parties.

I also have to say – it was a mistake for Warners to stress that Aquaman, Cyborg, Flash, etc would be in the film – and the rumor mill had them all coming in, in the third act for a spectacle – and that would’ve possibly been cool, but having Wonder Woman and Batman opening really lame files on a computer…  that just feels cheap and bullshit.   Really does.   Complete cop out.  The AQUAMAN one was exceptionally lame.

But to me, the real problem of the film was just how preoccupied it decided to be with MAN OF STEEL.  Really, the first hour and a half of the film is about the political fallout of Zod’s attack.  It’s neat to show Bruce racing into certain death, but at the same time… Yes, it is building animosity towards Superman from the Wayne perspective… and showing him right there, showing an employee that lost his legs, a little girl that lost her mother.   Powerful stuff, but also…  just as an audience member… I’m fucking tired of this imagery.  The first half of the film is debating the first film.

Now, I loved MAN OF STEEL, in fact I watched it right before going to see BATMAN V SUPERMAN: DAWN OF JUSTICE – and as of right now, I greatly prefer MAN OF STEEL – mainly because it was its own film – and this new one is trying to convince us how deep and smart MAN OF STEEL was by constantly referring to it.  Sure, there’s lots of it that is being pushed by Lex, who is framing Superman with various terrible scenarios – and in a way it feels like it wants to have the weight of WATCHMAN, but that’s just not going to work here.

Now, I kinda hate Holly Hunter’s Senator in this.   She’s fine as a Senator, but this is all the boring shit that folks will fast forward / chapter skip – to get to the good parts.  Terrio and Crew decided to be too cute and clever with the devastation of MAN OF STEEL.   I would have preferred they just tell a new story.

My biggest problem I have right now with BATMAN V SUPERMAN: DAWN OF JUSTICE is Jesse Eisenberg’s Lex Luthor …  or… Alexander Luthor, who’s father we’re told is the Lex in LexCorps.  Now, I’m somebody that loves everything Eisenberg has done – and I know just flat out – this has more to do with my own estimation of Luthor in my mind – and Luthor – historically speaking has still never once been done particularly well on camera.   Gene Hackman and Kevin Spacey both played him as a bit of a buffoon – and personally I find that intolerable.   Here, Jesse plays Luthor – and I just still haven’t quite wrapped my head around what the fuck he’s doing here.

It’s evident he hates Superman.  But more than that, he seems to have an obsession with superheroes on Earth – or at the very least he’s been acquiring intel on them – getting web videos of some, pictures of others – there was more info than we were allowed to see – but it was all pretty lame anyways.

Luthor’s quirks were just annoying to me.  There’s a part of me that hopes Lex Sr is also in a prison and gets out to retake over LexCorps in a future film.   That’d be an easy fix.

The explosion that Lex causes was shocking, but the mason jar of piss kinda just ruined the whole thing by turning it into a crass joke.  Which does underline how fucked in the head Lex was, but still – it was all in very bad taste.

I think, that leads to what was most wrong with Lex Luthor – they made him all in all, inappropriate.  Cutely intellectual.  The best thing to do with Lex in the film is when he throws Lois off the building to call Superman.   That’s Lex.   But also, this is the first reveal of Lex Luthor as a villain… his first time going to prison.   So he’s trying to pull his first huge shenanigan – and if his final scene is to be believed, he’s set into motion something cosmic.  What all did he learn in the Kryptonian Genetic Swimming pool ship?  I’m hoping that upon multiple viewings, Lex’s character will seem less lame and more Machiavellian.  I know those aspects are there – I just didn’t fully appreciate it cuz I was waiting to see what was going to happen.  Plus it was taking too long to develop it felt like.

Then there’s SUPERMAN.  The premise of making SUPERMAN the beautiful alien / Christ child from Krypton isn’t how to handle the character.  He isn’t an alien, he’s from Kansas.  And having the character just say that… well, that’s not enough.  The film is mainly from the Batman perspective and given this very threadbare version of SUPERMAN – it just doesn’t hold up well here.  The worst scene is Arctic Pa Kent stacking stones.  The audience I saw laughed at this scene, which is not at all the effect it was going for.

The film is a whole lot of build up, then they take the Frank Miller BATMAN SUPERMAN fight – and glue it to the DEATH OF SUPERMAN / DOOMSDAY plot – and it just…   is such a limited scope for the characters.   I mean, Batman meets Superman, fights Superman, calls Superman Friend, Then DOOMSDAY fight with Superman – and it just didn’t fly for me.

Part of the reason is Doomsday’s big blast power which was just dumb.  Kinda like Luthor adding his DNA to make Doomsday…  hated that.  Sort of like how DOOMSDAY – the only thing that made him cool was that he was Brainiac’s guy – and we still don’t have Brainiac.  Having Luthor create him in the Kryptonian Hatchery just felt… a bit much.

Now – if I just dismiss that Doomsday is Doomsday – and is instead a Cave Troll with Blast Powers – and I just enjoy the action…  I gotta say, Wonder Woman with the Lasso around him, Batman hitting him with a Kryptonite Gas Grenade and Supes flying in with a Kryptonite Spear…  helluva take down.  In particular – the magic lasso with Wonder Woman holding him in place – that was super sweet looking.

The film felt a bit messy & erratic.  We know the R-rated cut is 30 minutes longer – and we have to wonder what is missing?  Personally, I could have done with 5 minutes of learning with Luthor on the ship.  Apparently he learned how to communicate with entities unknown in the future.

These are my thoughts for the film based upon the first viewing.   That said, I do have tickets for IMAX 3D this Saturday – and upon second viewing, if I see the film differently I will write another piece.   One thing is certain, it didn’t send me over the moon like I wanted.  I’m quite excited to see it again, as I can say I was expecting a bit of  a different movie.

At the end of the film, there’s a thank you list to a whole lot of great artists and creators that have inspired the film.  To see Curt Swan’s name there is pretty sweet, but I’d kill to see SUPERMAN be a bit more Swan-ish.   Batman’s final talk with Wonder Woman gave me goosebumps – and vibrating dirt… I mean, who was surprised?

I don’t feel it is a bad movie, just one that I wish was even better – Now to see it again and see if it goes up or down in estimation.