SXSW '16, Friday 2 of 2: Vinyard goes south then west with I AM THE BLUES, MY FATHER DIE, and WAR ON EVERYONE!

It finally rained upon us on the second Friday of SXSW, but the lines were still long for the three films I saw today. The first two both happened to take place in the dirty south, and the latter two both involved children in peril and featured an interracial relationship without ever feeling the need to comment on it. They also both had good shootouts. Things are both winding down and crazier than ever here in Austin, now that the music festival is in full swing, and tomorrow's the last day, with the bulk of the evening shows being award winners that haven't been announced yet. Here's what I saw on this rainy Friday: 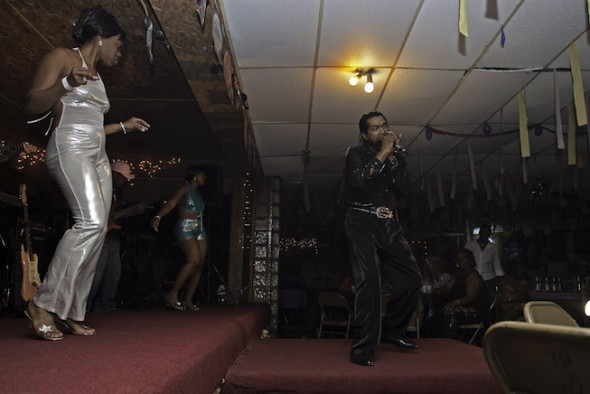 I AM THE BLUES, dir. Daniel Cross.

This music doc about a dying breed of blues musician is, first and foremost, unabashedly in love with the blues. That passion for this style of music, in particular the form’s mid-century peak, permeates every frame of this film, which catches up with several aging blues musicians in and around Louisiana as they live, talk, and very often, play music as well as ever. Seriously, perhaps the biggest thing this film has going for it is that it constantly manages to impress with how well these often octogenarian vets can still bring it after all these years. There’s inevitably a ton of great music all up and down this thing, mostly live performances, and all sorts of styles of blues, including a couple of women. There’s a perfect moment where a male musician says that a jam was so good that, “It’ll make (a woman) go inside and cook,” and we immediately cut to guitarist/singer Barbara Lynn playing as well, if not better, than anybody in the movie. I didn’t recognize any of these performers by name, but there’s not a weak set in the bunch.

A movie about a bunch of old folks run the danger of being boring, provided the subjects aren’t interesting enough. Luckily, these men and women happen to be an eclectic bunch of colorful characters, and it’s fun to watch them inhabit their day-to-day lives and interact with one another. We see the run-down country neighborhoods they reside in, the ratted down local hangouts, and the local bars and venues where they play their music. The pace is pretty slow, and meanders without a lot of forward momentum, but that seems appropriate given the environment and the type of lifestyle that’s being explored (one player is never seen without a Bud Light can in his hand, including while he’s driving). One problem that I had, personally, as a yankee was that I could not understand much of what was actually being said due to the thick southern drawl of a lot of the subjects; some of them are subtitled, but not nearly enough of them, and there was definitely stuff I missed. But I still felt like I got to spend enough time with these people to get an idea of this little corner of the country that I never would’ve been exposed to otherwise. 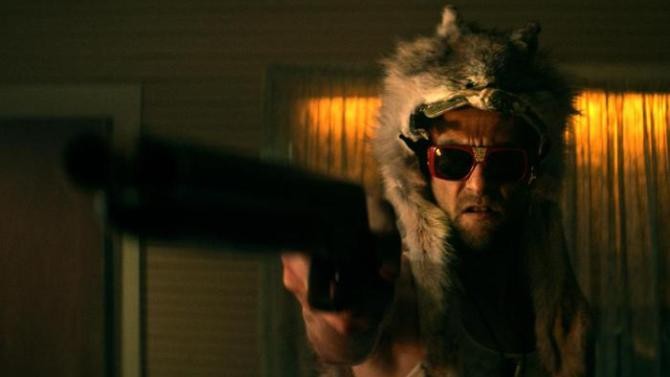 Pierce Brosnan produced his son’s debut film, a bloody southern revenge story with two significant twists: the protagonist has no hearing, and the villain is his father.

Joe Anderson (THE GREY, THE CRAZIES) plays Asher, who, as a boy living a backwoods life with his older brother. In a flashback, we see that he lost his hearing when his daddy, Ivan, beat him for playing lookout as his brother had sex with a local girl that he’d claimed for his own. He then proceeded to beat his older son to death right in front of Asher. We catch up with him as grown man, as he learns that Ivan is getting out of jail early due to “overcrowding and good behavior.” Asher, steadfast and determined, saws the barrel off of his shotgun and goes to work hunting down his old man for the purposes of avenging his brother’s brutal murder 20 years prior.

This is a fairly simple, straightforward revenge tale, augmented by the two great narrative curveballs I mentioned and the southern setting. Brosnan depicts an evocative, dark south, where murderous rednecks (including one played by Waingro from HEAT, Kevin Gage) run rampant and seediness creeps all throughout the woods. This is a pretty hard-hitting, violent flick, with vicious beatings (including of children), rape, and some explicit uses of Asher’s sawed-off shotgun. Anderson’s deaf Asher makes for a memorable, exciting hero akin to Jean-Louis Trintignant in IL GRANDE SILENZIO (THE GREAT SILENCE); the actor does a great job of conveying what Asher’s thinking without any dialogue, and is expressive enough to be able to pull off eating ice cream with a child character in one scene and blowing toes off in another. There’s even a cool idea where we hear his narration in the childhood voice from the age he was when he lost his hearing, which adds a little poetic, Malick-y touch to the proceedings (which the editor said afterward was not an accident).

There are two big things that irked me, the first one being a key scene about 20 or 30 minutes in where, if Asher had acted correctly, the entire movie would end. That you can directly blame everything horrible that happens for the following hour-plus on Asher’s incompetence in that scene is bothersome, and muddles the waters of what otherwise boils down to a pretty simple good-versus-evil revenge story. The second thing is an ending that seems like it’s going to be perfect and devastating, but then it chickens out in a big way and ends a bit softer than I thought was appropriate.

I really liked this film, and going by the audible reactions of my fellow audience members, it has a visceral impact on most people as the assaults and shootings start to pile up. Brosnan puts on a couple of excellent action scenes, including a strong car chase and a climactic showdown that somehow makes dudes shooting right at each other unobstructed into something powerful and exciting. Anderson’s Asher, with his lack of hearing, childish inner voice, and the fox skin he wears on his head, cuts a memorable figure, and is a badass, rootable hero. This reminded me a little of a revenge film from two years ago, COLD IN JULY, with its southern setting and paternal conflict, but it gets a lot more violent and vicious, and feels like it takes place in a much deeper, more rural, and scarier area of the country. 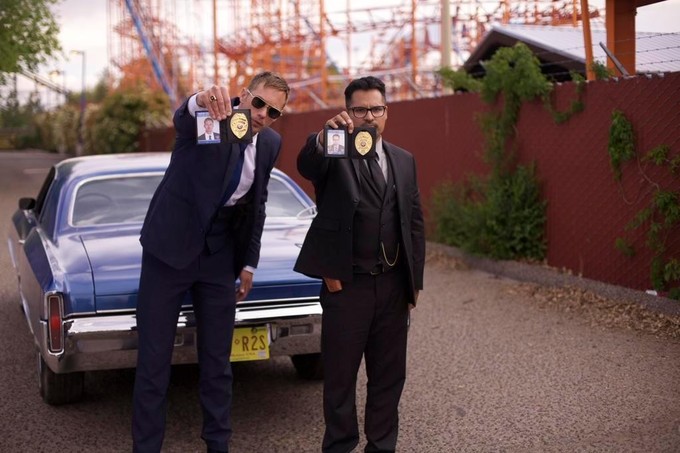 The most straightforward buddy-cop movie I’ve seen since, I guess THE HEAT (or maybe LET'S BE COPS), this third movie from THE GUARD and CALVARY director McDonagh is headlined and held up by the perfect team of Alexander Skarsgard and Michael Pena. The two actors play corrupt cops, best friends, and partners Terry and Bob, who have a great time busting criminals and deadbeats around Alburqurque, and usually ripping them off instead of arresting them. Terry, hulking and Nordic-looking, is the more angry, Riggsian loose cannon, not remotely adverse to viciously beating perps to a pulp if he feels like it. Bob is the family man, quick with factoids and even quicker with his insults. Nice only to each other, they are both rude, violent, and often offensively racist, as well as deeply, unrepentantly crooked. The opening glorifies these two in action with great, ‘70s cop show aplomb, and watching them be badass, naughty cops together is the main attraction of this film.

The story pits Terry and Bob against a cliched British villain (Theo James using his native accent), who is making a big, near-million-dollar score; they intend to steal it, of course, and their pursuit runs the ire of their beleaguered chief (Paul Reiser, obviously a callback to BEVERLY HILLS COP). They work their hippied-out informant (David Wilmot), pursue an afro-ed, Muslim witness (Malcolm Barrett, PEEPLES), and harass a flamboyant, murderous strip-club owner (a wonderfully bizarre, outlandish Caleb Landry-Jones), and work their way up to the big bad bossman, all with hilarious indifference and attitude.

It’s easy to fall in love with this movie, especially if you’re a fan of the cop/crime thrillers it’s so blatantly homaging (Terry and Bob dress like they’re in a PULP FICTION knockoff, and Bob shows OUT OF SIGHT to his family, describing Soderbergh as “a Jewish-American auteur.”). I was immediately won over, only to worry that it would drop the ball at some point, and it did only in a few regards. When they talk at my funeral, I hope they say, “He hated extraneous romantic subplots,” given the amount of hatred I have for that annoying-as-all-fuck go-to plot point that has unnecessarily compromised so many otherwise airtight films. Sure enough, they pair the single Terry with Tessa Thompson, whom, I hate to say, I continually find kinda flat. I know the actress has fans, and a lot of steam in her career, but I’ve yet to like her in anything, and watching her and Terry flirt, fuck, and dance did absolutely nothing for me, and adds little to the flick. It of course, doesn’t help that Bob is clearly the funnier, more magnetic of the duo, a sentiment apparently shared by Terry himself given how he talks about his partner.

Another issue is, unfortunately, just how corrupt they are. I mean, for most of it, it’s hilarious how un-P.C. it is to heroize piece-of-shit cops who abuse their authority, and that’s a large part of what gives this film its punchy, fun feel. But inevitably, there were certain points (like when Terry brags about how he can shoot anyone with complete immunity), where I couldn’t help but think about the damage unlawful policing has done to so many communities in this country. It’s just unavoidable, and a quick mood-killer. Add to that an oddly easy, anticlimactic finale (far inferior to the one in THE GUARD) and an overly kitschy use of Glen Campbell music, and there’s just enough for me not to sing the praises of this movie from the rafters, even though I really, really want to.

But as someone who really enjoyed THE GUARD, I have to say that this is a decided improvement on that film, which I felt was funnier than it was fully-realized. There’s decent action, terrific banter, a fun roster of scumbags, and even a quick, hilarious jaunt to Iceland (which leads to easily the biggest laugh of the movie). Sure, there’s a completely bullshit, unwanted love interest, and McDonagh’s love for abusive figures of authority sometimes conjures up nasty memories of real-life incidents (there’s even a not-so-subtle allusion to Eric Gardner), but the film’s got it where it counts.

…its balls, I was referring to, if you didn’t get my meaning. Film’s got balls.

Also, this is the best evidence thus far that Michael Pena really needs to stop playing second banana to white leads, and run one of these movies on his own already. Motherfucker can obviously handle it, so give him his shot as the star of something funny, not fucking CESAR CHAVEZ.