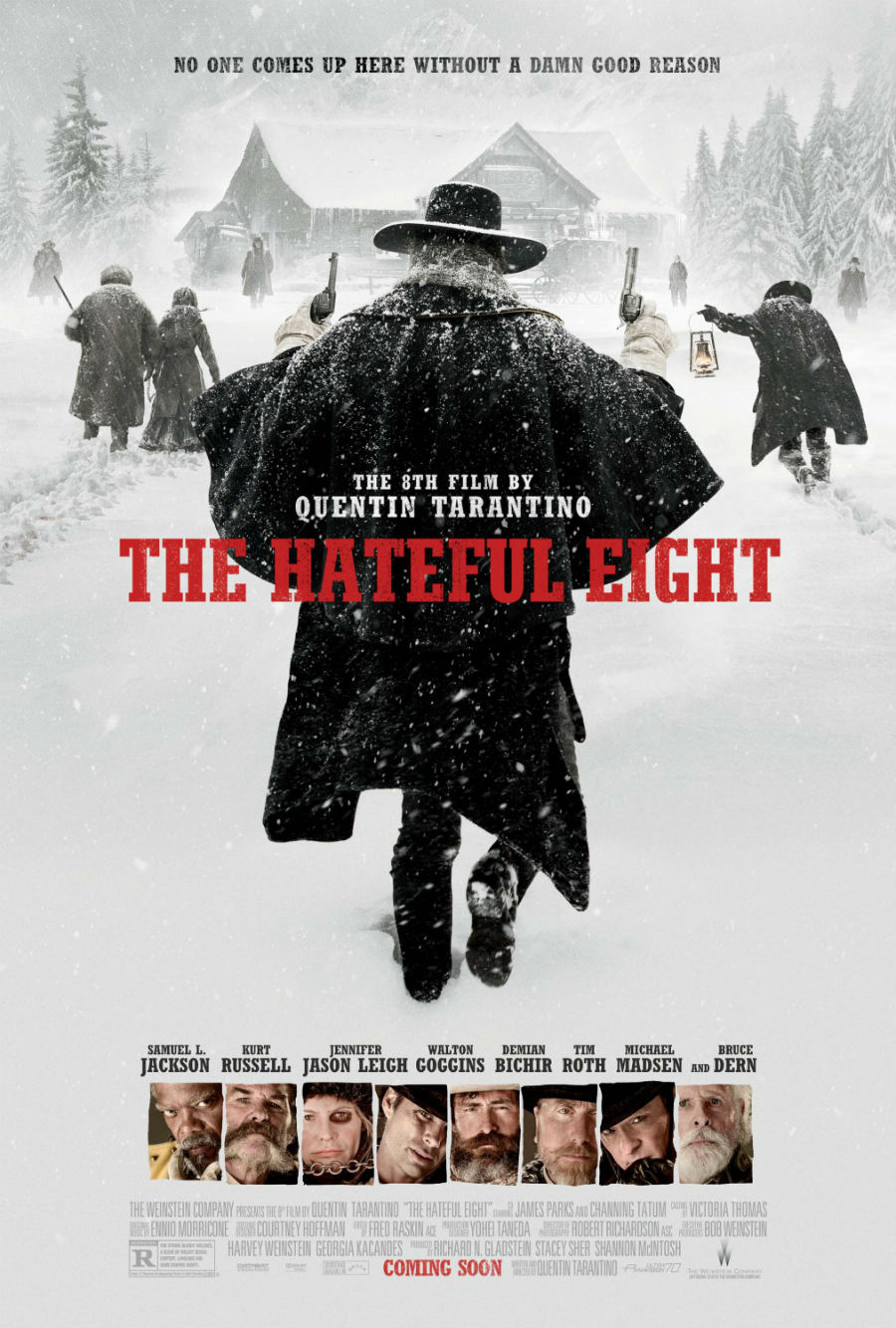 I sincerely hope Quentin Tarantino doesn't retire.  But if he does, we should enjoy the ride as best we can, and on his terms.  With Tarantino, the old is new again, and while he's been accused of ripping off many story tropes that he's seen in films and television over the years, it's not the ingredients that make a great stew, it's the care and love that goes into making it.  And Tarantino loves movies.  His love goes into each and every one of them, and it's supremely important to him that his love shines through.

Love ain't enough, though.  I have a ton of love for cinema, but I have the sneaking suspicion that I probably wouldn't be very good at it.  What separates Tarantino isn't that he can appreciate and process great cinema from past to present, it's that he can use what he's learned and make rich, compelling art.  And so we come to THE HATEFUL EIGHT, which is many things in one: a traditional Western, an Agatha Christie-type chamber mystery, a commentary on social issues, a showcase for some of the best performances from the careers of quite a few illustrious actors, and finally, one of the most entertaining films to come out this year.  Where does THE HATEFUL EIGHT rank in Tarantino's catalog?  Hard to say, and certainly not one I'd attempt to rank at one viewing, but I'm tempted to put it high in the roster.  It's remarkably funny, has a sweet tension, and is a lot nastier than expected (and from Tarantino, that's saying something).  There's a cruelty to THE HATEFUL EIGHT that we haven't really seen at this level since RESERVOIR DOGS - while we get nothing quite on the level of the famous ear-slicing scene, the animosity between all the characters is palpable, and Tarantino plays our unease like a violin.

I don't read Tarantino scripts anymore.  I used to, but what's on the page feels like merely 5% of the energy that is onscreen, and the joys and surprises of a Tarantino movie are best left to experiencing them for the first time, so I won't dive very deeply into the plot.  Basically, Tarantino created a staple of great characters, put them in a jar, then shook the jar to see how they fight.  I am always impressed with how Tarantino can create such a diversity of a rogue's gallery in his movies, none like the other, as if he has a limitless bench of unsavory people just waiting to swing at home plate.

All of the actors step up admirably.  I adore Kurt Russell's John "The Hangman" Ruth, who while being a brutal bounty hunter also has a streak of naiveté about him that makes him endearing.  During one scene, Ruth faces a brutal truth, and Russell makes the pain and hurt that Ruth feels very believable.  Samuel L. Jackson's Major Marquis Warren is the smartest man in the room, but he also knows how to manipulate those around him who disregard him at their peril.  This is one of the best roles in Jackson's career, and it's a shame more people aren't talking about what he does here.  Jennifer Jason Leigh as Daisy Domergue carefully navigates between sympathy and disgust, and we can never be sure what her motivations are, until it's too late.  Sheriff Chris Mannix, played by Walton Goggins, is a man of shifting loyalties, between doing what is right and what is profitable, and Goggins does well playing his cards close.  Bruce Dern, as wildly racist but oddly respected General Sandy Smithers, is also careful about showing his hand, and a crucial scene between him and Jackson has to go in the books as one of the best written Tarantino scenes ever, right up there with the Dennis Hopper/Christopher Walken face-off of TRUE ROMANCE or the basement games of Michael Fassbender and August Diehl in INGLOURIOUS BASTERDS.

All the while, the glorious score of Ennio Morricone ratchets up the dread, and the remarkable cinematography of Robert Richardson plays with the vistas of 70mm beautifully, while curiously giving us a real sense of claustrophobic distress.  This must be experienced first in a theater, and if at all possible, in 70mm projection.  THE HATEFUL EIGHT deserves that, and if you can, you should make the effort.  I have only seen the Roadshow version and not the regular theatrical edit, but I will say that the Overture and the Intermission make THE HATEFUL EIGHT feel like a unique, cinematic experience, and that the Intermission hits at the most perfect moment in the movie, one that will have audiences excitedly discussing what they're seeing in the lobby.

THE HATEFUL EIGHT is one of the most engaging movies of Tarantino's career - the ideas bounce energetically, as if you can grab one of them in midair and examine it like facets in a diamond.  Tarantino isn't given enough credit for the depth of his themes and his subjects in his films.  While INGLOURIOUS BASTERDS subtly suggested the nobility of villainy and the barbaric nature of heroism, and DJANGO UNCHAINED examined the brutality of slavery inside the confines of a spirited action Western, THE HATEFUL EIGHT studies the relationships between men and women who cannot bring themselves to trust each other due to the strictures of their time and their own backgrounds.  Prejudice and fear are our natural defaults, THE HATEFUL EIGHT suggests, but those can be overcome with respect and mutual understanding.  We don't have to like each other, but if we want to get out of this place alive, we damn sure have to respect each other, and we must fight our own animosities and contempt with others with intelligence and patience.

Tarantino never makes his themes overt, never beats us over the head with his message, which makes what he has to say all the more effective.  Comparisons to John Carpenter's remake of THE THING are apt, and Tarantino getting Kurt Russell to play along is a bonus for those of us who are huge fans of that film.  But THE HATEFUL EIGHT is all Tarantino, and as entertaining as any film he's made thus far.  This is one of my favorite films of the year, and I'm excited as hell to see this again with an eager, enthusiastic crowd.  This may be his eighth film, but even with all the oppressive ice and snow of THE HATEFUL EIGHT, it feels like Quentin Tarantino's just getting warmed up.