Ahoy, squirts! Quint here. I wasn't invited to the premiere of Star Wars: The Force Awakens and I was cool with that. I've never really been one to think I'm owed anything by the studios. Hell, I've even argued with critic friends that we aren't owed press screenings. There's no law that studios have to show us stuff early so we can be timely with our reviews, it's just how the symbiotic relationship between film creators and film critics has evolved over the decades. Just because it's the norm doesn't mean you should take it for granted.

I mean, when the vast majority of my Los Angeles-based colleagues were invited to the premiere, I of course hastily refreshed my email, but wasn't exactly surprised when nothing came for me. I'm in Austin, for one thing, and everybody getting invited were local.

But then something strange happened. Less than two weeks before the premiere I got a magic last minute invitation. The second I made sure it wasn't some kind of mistake I booked my airfare. How could I not? The movie could suck or be great or fall somewhere in the abyss between, but this was going to be the premiere to end all premieres. Last minute airfare prices be damned, this was going to happen.

So, I ended my BNAT, went home and slept for 13 hours, woke up and jumped on a plane to Los Angeles so I could dress up in my fancy clothes and watch Star Wars: The Force Awakens.

The premiere itself was really amazing to go to, but despite the star-gazing and catching up with some LA based friends, the real benefit was just watching the movie. All that other stuff was cool, don't get me wrong, but the movie was front and center in my mind.

I have decided to file two reviews for this film. This first one will be vague and as spoiler-free as I can make it. There will not be any big reveals discussed or broader implications for the new trilogy speculated upon. I'll save that stuff for my second review, which will likely post either over the weekend or on Monday.

Keep in mind: while this is the “spoiler-free” review I do talk about the movie and my feelings on the movie. I will not spoil any plot turns or go in-depth on character arcs or anything, but the only way to be completely spoiler free is to close your eyes, plug your ears and hunker down until your ass is planted in the theater.

Also, I like to think that I'm levelheaded, but this review does spring from about the most awesome first viewing of the movie I could have had. Patton Oswalt was in the row in front of me. I passed Stormtrooper costumes to get into the theater, which just happened to be the legendary Chinese Theater where the original opened in 1977. No one is immune to bias in a scenario like this, especially a big Star Wars nut. I don't think this skewered my opinion of the movie, but that's really up to you to decide. 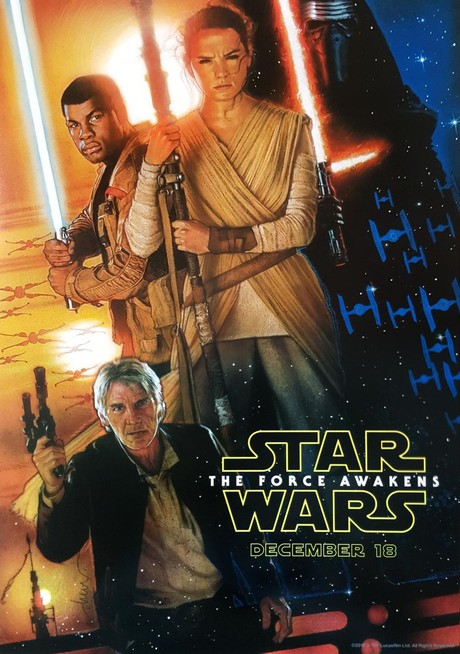 The movie's good. Damn good, actually. Besides one noticeable throwaway mention early in the movie there's almost nothing from the prequels on display. It's clear as crystal this is a course correction and a direct continuation from the original trilogy. Nothing negates the prequels, mind you, so prequel fans don't need to get immediately defensive. No, it's just that the focus is squarely on capturing the OT tone, sense of fun and adventure and continuing THAT story.

It's clear from the opening sentence of the crawl that they nailed the approach. There is mystery, intrigue and excitement before we see one actor.

One of the best things about this movie is it doesn't try to over-explain what happened in-between ROTJ and TFA. The crawl sets the stage and we get little hints and clues throughout the journey of the struggles since. There's so much richness we only glimpse that could fill a dozen cannon books or be delved into in future movies.

The big win for this movie is the new cast they gathered. It was great seeing Harrison Ford back as Han and completely owning it. Carrie Fisher brought it, too and Mark Hamill as Luke sent shivers down my back. But we know Disney's in it for the long haul and this next generation of Star Wars actors had to nail it or we'd just get this nice little trilogy and have to figure out a reboot later down the road. 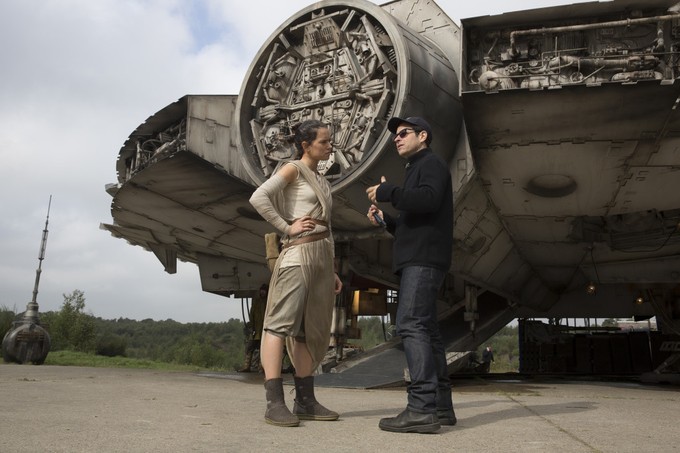 How anybody can watch this movie and not fall in love with Daisy Ridley is beyond me. She's strong, independent, but not at all cold. It doesn't feel like they decided “let's make the feminists happy” and tried to give us some stereotypical and hollow “strong woman” character just for the sake of having a strong female character. There's a depth to Rey that comes through immediately.

John Boyega is fantastic. No surprise there, he's a great actor who has been on the verge of breaking out big since he smashed onto the scene with Attack the Block. What is a surprise is how complicated his character is considering it could have easily just been another “reluctant hero” archetype. He's funny, he has a big heart, but he's scared. He knows how bad the bad guys are and just wants to get as far away from them as possible even though destiny seems to be pushing him into a direct confrontation. I can't wait to find out more about this character.

And that brings us to Oscar Isaac's Poe Dameron. He's for sure the Han Solo of this new group. Full of swagger, charm and charisma. He's one of the most heroic hero types I've seen in a movie in a long time. Isaac is at Errol Flynn level of charisma right at his introduction. There is no reluctant hero journey for him. We meet him as a bad ass resistance fighter on a mission. He's been in this for a long time and is one of the best there is at what he does.

I know I just called Poe the new Han Solo, but what's great about the new trio is they aren't locked into one particular established role. Finn has little bits of Han, Luke, Leia and even Threepio in his personality. Poe does, too. All of them fit together as a new unit, but none of them are just substituting out for the older cast.

Now for the bad guys. 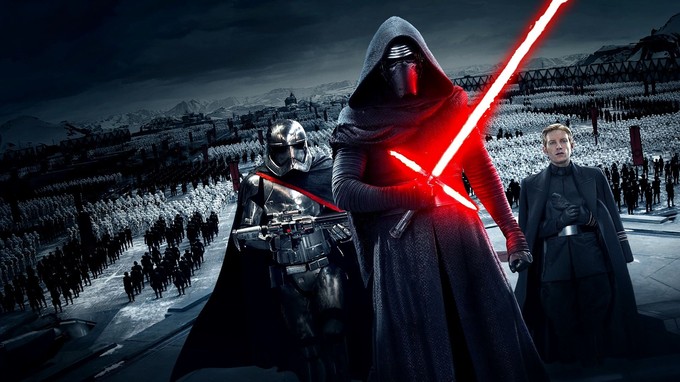 Kylo Ren is a great villain and I'll talk more about him in the spoilery-article, but I'm so glad he's a real threat. Unpredictable. His emotions get the best of him. He's not a cool and calculated bad guy like Darth Vader. He's much more volatile. He rages when things don't go his way. There's a lot of conflict surrounding this character and it makes me really excited to see how the this new trilogy expands on a lot of the ideas and themes with the new villains.

That said, not all of the villains get the same level of attention. Phasma isn't in the movie a whole lot and I really would have liked to have seen her involved a little more. Hux is kind of one note. It's a good note and Domhnall Gleeson plays it for all it's worth, but he's a simple character without the same kind of texture someone like Tarkin had.

Snoke. I'm on the fence about this character. I'm not a huge fan of his design, but we don't see much of him in the movie. I have a feeling Snoke's make it or break it moment as a character will come in Episode VIII.

The movie will feel very familiar to you and I think a lot of the more snarky critics out there will roll their eyes at how the skeleton of The Force Awakens is A New Hope. I don't think that's necessarily a bad thing, as Creed has proven recently. Taking the skeleton of the original and hanging a new cast and updated filmmaking can work and I think it works here.

The more I've thought about the film the more interested I am to examine it a second time because I think there was a conscious effort to follow in the footsteps of A New Hope while subverting the structure. I can't go into any more depth without talking about specifics, so we'll cover this more in the spoiler article, which will also have the benefit of being written after a few more viewings on my part.

There are things I don't like about the movie, but they're all minor and feel like nitpicks. Some scenes feel truncated and unearned. There's a whole lotta fan service that's so on the nose that if you're at all sensitive that sort of thing will make your eyeballs roll out of your skull (most of us will take it in stride, though). Coincidence is all over this movie. You can argue that the Force is guiding the events, but that's a slippery slope to anything can happen at any point no matter how unbelievable because, hey! The Force, you guys!

Some of that bugs me, but no matter how much I try to dwell on it I can't muster up any true negative feelings. The tone, locations, effects, characters, cinematography, pacing and attitude just feels right.

And I really tried to find stuff to dislike. I remember the sinking feeling in the pit of my stomach when Phantom Menace began, but I also remember leaving the theater doing my damndest to overlook the man negatives with the film. The lightsaber duel was rad! John Williams' new Star Wars music was awesome. Darth Maul was cool... Um... I like Liam Neeson!

It took me three viewings before I finally admitted that it wasn't me that wasn't getting something. It just wasn't a good movie. I was very conscious of that going into The Force Awakens and as a result even the light criticisms I have right now could very well be an over-reaction as I do my best not to repeat the same mistakes I made in 1999.

My next viewing is Thursday evening. I'm legitimately curious how it's going to hold up. I'll likely be paying closer attention to some of Rey's development and be actively listening for John Williams' score. The only time I noticed it on first viewing was when a familiar theme would pop up, but I was so enraptured by new Star Wars imagery that the new stuff fell into the background.

No matter what, I think JJ Abrams should be commended for really setting the stage for a sequel with higher emotional stakes. It's quite the feat to say that he made a pretty self-contained story that has a beginning, middle and end (with big arcs for all the leads), but still sets up the next one without feeling like the story we watched was just a stepping stone, a means to an end.

There's a lot we still don't know by the time the credits roll and I can guarantee you that the final couple of minutes will make you desperate for Episode VIII to get here. Guarantee you.