... The big news about “Star Wars: The Force Awakens” is — spoiler alert — that it’s good! Despite the prerelease hype, it won’t save the world, not even Hollywood, but it seamlessly balances cozy favorites — Harrison Ford, ladies and gentlemen — and new kinetic wows along with some of the niceties that went missing as the series grew into a phenomenon, most crucially a scale and a sensibility that is rooted in the human. …

... Perhaps inevitably, this, the most hotly anticipated motion picture since "Gone With the Wind," has an erratic, haphazard quality to it. Though a definite improvement on the last three abortive "Star Wars" prequels directed by series creator George Lucas, "The Force Awakens" is only at its best in fits and starts, its success dependent on who of its mix of franchise veterans and first-timers is on the screen. … At its best, however, "The Force Awakens" basks in the presence of an altogether splendid Harrison Ford who, unlike original costars Carrie Fisher and Mark Hamill, has a full-fledged, rip-roaring leading role rather than a cameo. Until he checks in midway through the film, appropriately craggy and battle weary, and elevates everyone's game, the pickings are slim. …

... It's easily the third-best in the franchise to date, behind the original, renamed "A New Hope" ('77), and "The Empire Strikes Back" (1980). Abrams' temperament and tastes are sincere and amusing in roughly equal doses, and that's about right for "Star Wars." …

... The effect is like pulling a cherished old record album from the shelf and cueing up the needle. “Star Wars: The Force Awakens” is analog. You can touch it. It feels good. Don’t tell anyone, but the movie’s more of a remake than a reboot. That’s what keeps it from being a great “Star Wars” movie, as opposed to one that just satisfies every nostalgic itch you need scratched. …

... With a cast of entertaining new characters, heartfelt scenes, huge planetary battles and no qualms about being very funny or very dark at times, director J.J. Abrams’ Star Wars: The Force Awakens (**** out of four) returns the iconic sci-fi franchise to a glorious place that hasn’t been seen since Ewoks danced off into victory in Return of the Jedi 32 years ago. … Gone is the clunky dialogue of the prequels — instead, it’s replaced by some seriously clever writing that often leads to nice little moments, many with Han and Finn. …

… To love the original is to love this one. On its own, "The Force Awakens" probably isn't much. It's not likely to convert anyone, either. But for the rest of us — even the most casual of fans — it fits the bill just fine. …

... the franchise has roared back with full force. … Everything you need to know about the movie is precisely where it belongs, in the movie. Just see it. You’ll love it. …

... by any measure a rousing, even restorative seventh chapter in the immortal space-opera saga … Still, the reassuring familiarity of Abrams’ approach has its limitations: Marvelous as it is to catch up with Han Solo, Leia and the rest of the gang, fan service takes priority here over a somewhat thin, derivative story that, despite the presence of two appealing new stars, doesn’t exactly fire the imagination anew. …

... The Force is back. Big time. As the best Star Wars anything — film, TV show, video game, spinoff, what-have-you — in at least 32 years, Star Wars: The Force Awakens pumps new energy and life into a hallowed franchise in a way that both resurrects old pleasures and points in promising new directions. … 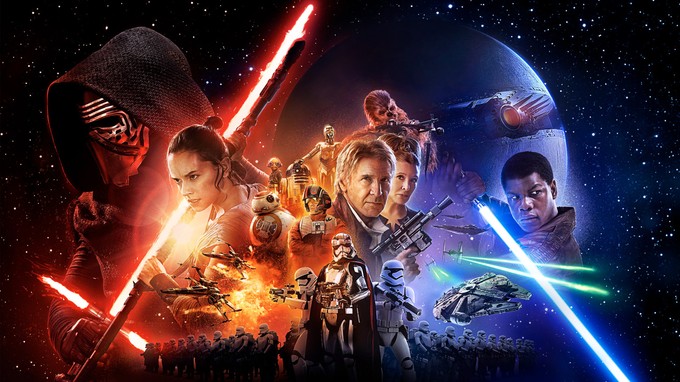 The three Monday-night Hollywood Boulevard screenings of “The Force Awakens” have let out, and the reaction is pouring into our inner children via twitter.

“Might be the best blockbuster since the original,” tweeted “Montage of Heck” director Brett Morgan.

(That would mean it’s better than “The Empire Strikes Back.”)

"Beyond amazing. Truly. It was an emotional experience that exceeded my hopes!!!" tweeted "Talking Dead" host Chris Hardwick.

Most of the press corps is prohibited from reviewing the movie (even on Twitter) until after 12:01am very early Wednesday, but I’m not sure that applies to trades like Variety. Keep your eyes peeled for the first notices from film critics tomorrow.