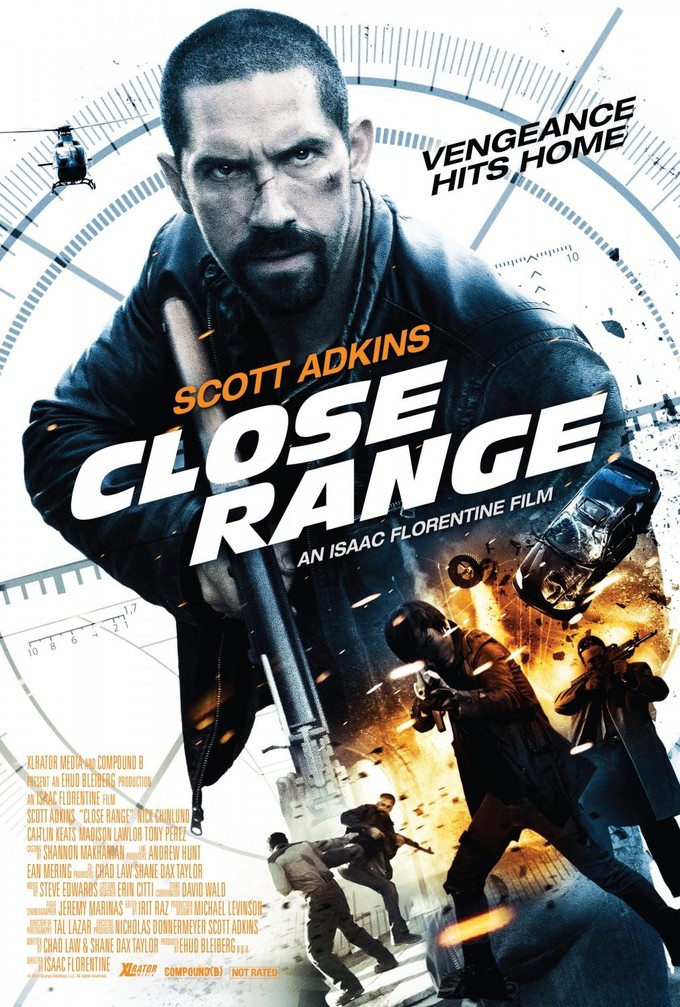 If you’ve ever seen an Isaac Florentine movie, then you probably agree that his films have got some of the best fight scenes around. Between UNDISPUTED II and III, NINJA, NINJA: SHADOW OF A TEAR, and now CLOSE RANGE, Florentine has shown an incredible gift for portraying brutal onscreen melees, often in long cuts and featuring eye-popping moves and stunts. Even though he’s mostly worked in the low-to-mid-budget realm, his action is consistently top-notch, and he has established a style and rhythm that is all his own.

Another thing the above movies all have in common is that they all star Scott Adkins. Sure enough, Florentine and Adkins have clearly developed a relationship and shorthand that allows them to shoot incredible action quickly and efficiently without losing the punch, so to speak. In CLOSE RANGE, Adkins plays an ill-natured former merc who springs into action to rescue his kidnapped niece from a cartel. When the kidnappers retaliate by laying siege on his sister’s rural home, he has to fight off the cartel’s top enforcers while keeping his family alive. It’s a classic western scenario, and one that gives Florentine and Adkins full reign to fight, shoot, and drive in and around the house with all the aplomb one would expect from their seventh collaboration.

During our conversation, Florentine talked about why he and Adkins work so well together, the troubles with shooting in L.A. for the first time, and why his films are so much cooler and well-executed than the bulk of big-budget action pictures: 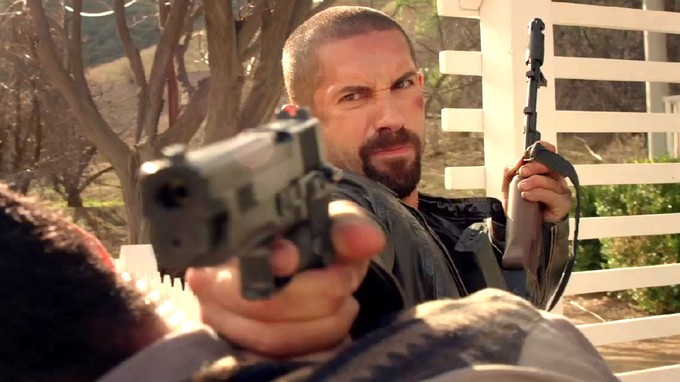 VINYARD: First off, I want to start with your relationship with Scott Adkins. When you guys get together, how do you decide what you’re going to work on next? How’d you pick this project?

ISAAC: Sometimes projects come by chance. I actually got a script that was a totally different script, and one of the people who I thought was the right producer to do it was Ehud Bleiberg from the company. I contacted him, and he didn’t like the script that I gave him, but he said, “You know Isaac? There’s something that I wanted to do that’s we’re struggling with. Can you read it? I think I want to do it.” He sent me that script, and I went, “Okay, I can do it, but the right person to do it is Scott Adkins.” And that’s how this movie happened. You’re talking about oranges, and people are talking to you about apples, you know?

VINYARD: One thing that’s carried over from your other films is your one-shot fight scenes. They’ve grown in length from film to film. In NINJA 2, you had the fight scene in the dojo with five opponents. Here, you have more opponents in a multi-location fight scene. How did you and Scott realize those scenes?

ISAAC: It’s not that you set out to do something in one shot. You're looking for locations, and you say, “If I can find the right corridor from the elevator that could lead to another room, I could do it one shot.” We shot the movie in L.A., so I had it in my mind, “If I’m going to find an elevator affixed to a corridor that leads to a room, then I can do all of this." They took me to various locations, and I didn’t like them because it was stuck in my mind that I wanted to do it as one shot. Once I found that location, I said, “That’s it.” I remember the producer saying, “It looks more like a hotel corridor than a court corridor.” And I went, “Yes, maybe, but I want to do it in one shot. That’s why I chose it!” And he said, “Okay.” I remember when we shot it in one shot, he really liked it.

VINYARD: What do you think shooting fights in long takes brings to the movie?

ISAAC: The audience today is more sophisticated than you think. Even audiences who are clueless about cinema, they feel when there’s a cut and when there’s no cut. If you have somebody as talented as Scott that can go and do it in one shot without a cut, then you support it with a team of stuntpeople who can support it and make it look right and a cinematographer who can literally be there in the right angle in the right moment and the right pitch. It creates…the effect is bigger than what it’d be if it was cut-cut or hit-hit. Orson Welles used to say, “The difference between the boys and the men is the length of the shot.” 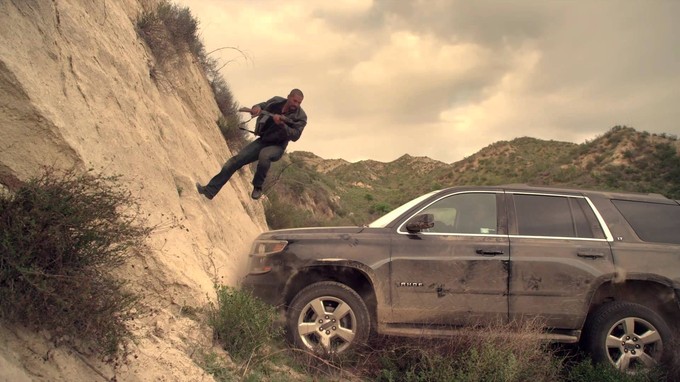 VINYARD: Another motif of those single-take fight scenes is going in and out of slo-mo mid-shot. Do you figure that out on set, or do you do those in post?

ISAAC: First, we determine the sequence. We break it into various beats. Sometimes, if you shoot everything in slow-motion or everything normal-speed, you might break the effect. You don’t want to overload it, because then you lose the effect. The best is to determine it in the editing room.

VINYARD: How do you determine when it should go into slo-mo?

ISAAC: Already during the choreography, we know. We say, “This would work fine in slow-motion, and this would work better in normal speed.”

ISAAC: The movie was shot in L.A., so I couldn’t really work with the usual suspects that I work with, like (UNDISPUTED II and III cinematographer) Ross Clarkson. The D.P. was recommended to me by a friend, J.J. Perry, who I also worked with on UNDISPUTED II, and I’ve known him for many, many years. He recommended a D.P. who would basically understand what I want, and Tal shot a few movies in Vietnam. I called Tal, and you know, it’s a small world? Tal studied in Tel Aviv University, where I studied cinema. Of course, he studied many years after me. I met him, then I saw his work, and sensed that he was the right person to do the job. David Wald was actually in my team in POWER RANGERS when I was doing POWER RANGERS. He was one of the stunt guys in one of the battles. I’d known him for many years, and you always look for the right opportunity to work with people that you know. I trust David a lot, so this is how I got David. Jeremy was recommended by J.J. and by David. Sometimes, you are doing something new, and you have to trust your gut and work with new people, but if you feel that those people understand what you want, then it’s okay, you know? You work with them.

VINYARD: Was there anything else about shooting in L.A., like any safety restrictions, that were new to you?

VINYARD: Most of your films were shot in Bulgaria until NINJA: SHADOW OF A TEAR, and now this one is in L.A. Is there any major difference in shooting on location versus shooting in Bulgaria?

ISAAC: No, not really. Let’s say I shoot in Bulgaria at Boyana Studio, they don’t want us to go and find locations because it’s all sitting there. You just go, and you shoot it, and you know what you own. Here, shooting in L.A., there were warrants and renting. In a way, it’s like you start from scratch. 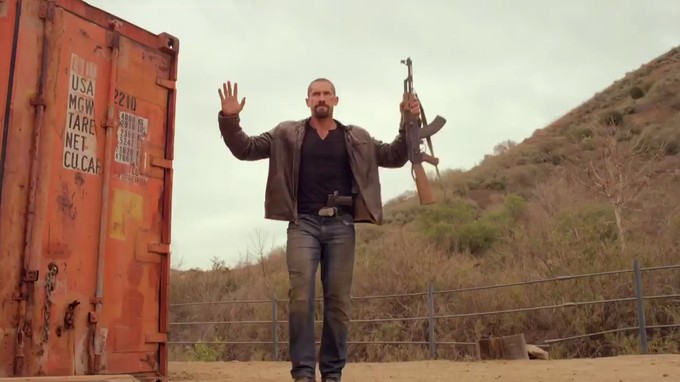 VINYARD: In your biography on your website, it says that THE GOOD, THE BAD, AND THE UGLY was the film that inspired you to become a filmmaker, and this film has a lot of spaghetti western influences, particularly at the final showdown.

ISAAC: I am very much inspired by spaghetti westerns because I grew up on spaghetti westerns. Sergio Leone is really my idol. For me, he’s the best director ever and I’m very inspired by him. I also like movies by Sergio Corbucci and Sergio Sollima, like THE GREAT SILENCE. Every movie that I do there’s some elements from spaghetti westerns. Sometimes they’re very subtle, sometimes they’re less subtle. Because this was really a contemporary western, it was an opportunity to go less subtle. Of course, the finale of the movie is very much like a Sergio Leone movie. It’s not really in the script, but I said, “Here’s an opportunity to do a final showdown.” Our hero is a good guy, but he’s a bad guy. He takes no prisoners, but here he’s giving a chance- this is kind of a spoiler here- to one of the bad guys. Either go to the gun and I kill you, or you handcuff yourself and you stay alive. It’s like a samurai, commit harakiri or choose the way of shame.

VINYARD: A lot of people are excited about BOYKA: UNDISPUTED IV. I think you’re already pretty close to finishing that up. What can we expect?

ISAAC: The fights are very good. I think the story is very unique in this one. You can see the soft side of Boyka. I think people will really be really pleased to see how much of a good actor Scott is in this movie. And the fights are very, very good, of course, needless to say. It’s taken the franchise one notch higher.

VINYARD: Have you seen any recent fight scenes in other people’s work that’s inspired your own?

ISAAC: Eh…no, not really. I haven’t seen so much in the last year, because I was too busy.

VINYARD: I don’t think you’re missing much, personally. What do you think the problem is with Hollywood fight scenes, where they have such a hard time getting that kinetic energy that your films have?

VINYARD: If you had a bigger budget like that, what would you do that you haven’t been able to try so far?

ISAAC: Finesse everything much more. The problem is you’re working so fast, it’s hard to finesse. If you have a high budget…a high budget for me is time. With more time I can do fun stuff, and then I could really come to perfection.

CLOSE RANGE is currently showing in select theaters and on iTunes/VOD.