Son of Flynn and Apocalypse take potshots at each other in this trailer for MOJAVE! 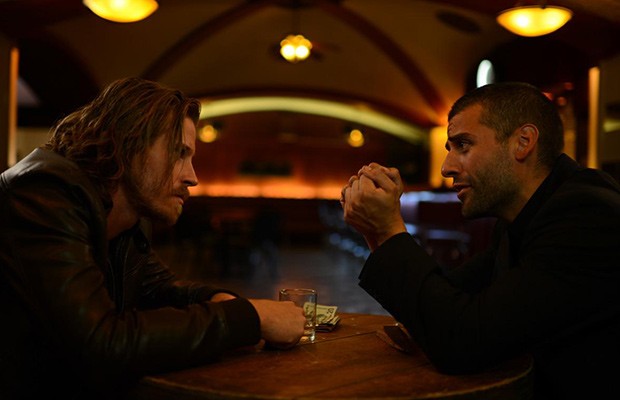 From the writer/director of LONDON BOULEVARD (uh oh…), and with the stars of TRON: LEGACY (oh shit…) and EX MACHINA (phew.), comes this thriller about a guy who crosses paths with the wrong hombre in the titular desert. William Monahan, who won an Oscar for writing THE DEPARTED, came up with this story that has Oscar Isaac stalking a hairier-than-usual Garett Hedlund for…as yet undisclosed reasons. Mark Wahlberg, who got an Oscar nom for spouting Monahan's dialogue, and Walton Goggins also make appearances allegedly.

Writing pedigree aside, this looks like it’s firmly in the STRAW DOGS/UNLAWFUL ENTRY vein, with the family man forced to defend himself and his home from a more, shall we say, unrefined element. Hedlund, who’s been trying to flex his acting muscles with stuff like ON THE ROAD and the also-Oscar-Isaac-starring INSIDE LLEWYN DAVIS, looks like he’s laying on some SONS OF ANARCHY grit for his performance, but Isaac certainly looks like he’s having fun as the John Ryder/Max Cady character. Other than his performance and some choice lines, however, this doesn’t seem like anything that remarkable, and Monahan’s first film as director was so inept and wasteful of its cast (Colin Farrell, Keira Knightley, Ray Winstone) that I’m not to hopeful of his prospects behind the camera.

But hey, if you want to see a STAR WARS hero acting not all that heroic, you can catch this film on DirecTV tomorrow and theaters next month.

MOJAVE comes home via DirecTV tomorrow, December 3rd, and then in theaters on January 8th, 2016.