Tannhauser has seen things you won't believe like the X-MEN APOCALYPSE Trailer!!!

Hey folks, Harry here...  I love spy trailer descriptions.  You read - and you try to imagine, then once you're seated for STAR WARS THE FORCE AWAKENS - and this comes on - you could just marvel at how inside you are.  Giggle.  I definitely concerned about the look of APOCALYSPE in X-MEN: APOCALYPSE, but then, has there ever been an X-MEN film where we weren't having bitchgasms at every costume image we saw?  Go back in time and read the original talkbacks for the first X-MEN movie - people wanted blood - but most of us were surprised how much we liked it.   James McAvoy in the chair, bald...  C'mon Brown suit and tie!  Giggle.   Now - if you don't want to know a thing about the trailer... Move along, nothing to see here.   But, if you're like me - and you just love knowing.   Here ya go! 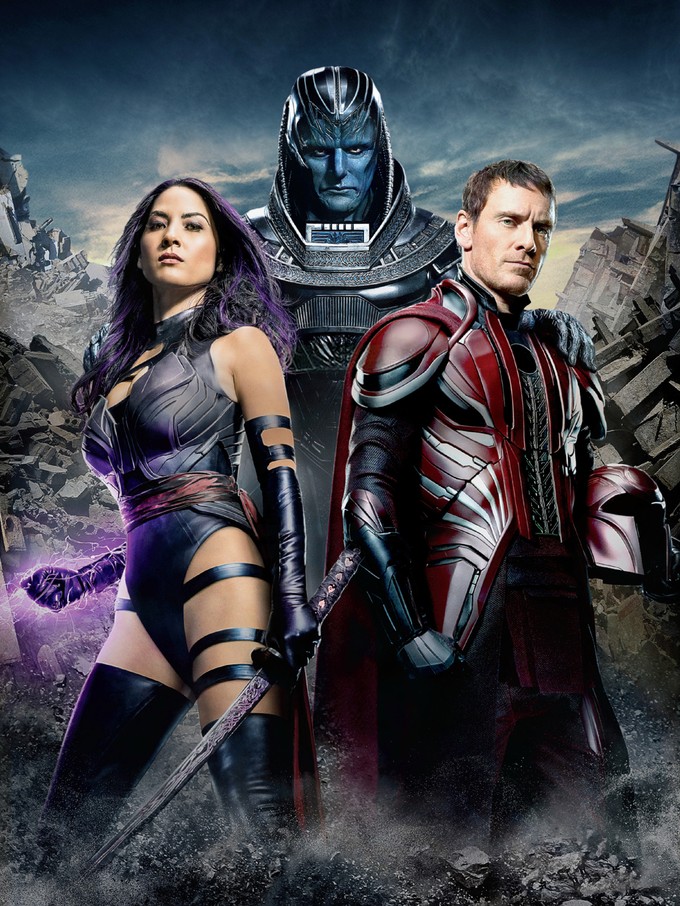 Long time lurker etc. I recently saw the first official trailer for X-Men Apocalypse and wanted to throw a short description your way. I haven't seen any description of the footage yet, so here goes .... And yes, the trailer will be attached to Force Awakens come December 18th.

The teaser consists of mostly character stuff, as the bigger VFX sequences obviously haven't been finished yet. And we do get a good look at Apocalypse himself and a couple of other really cool shots. Oh, and fans of the Hans Zimmer bwaaaaaaaaaaaaaa trailer soundblast rejoice. It is back in all its glory in this trailer!

- The trailer starts with young Jean Grey having a vision stating in a VO that she has seen how the world is going to end ... huge close up on Turners eyes here!

- A lot of shots with Rose Byrne explaining the legend of Apocalypse. He basically wakes up after sleeping a couple of thousands of years and discovers that his mutant "children" didn't live up to his hopes for his race. She calls him "the original one". Professor X says: "The first mutant".

- We some strange fascist looking dudes in white and black uniforms in a forest. They look like something out of THX 1138 or a 60's version of the Peacekeepers from Hunger Games, and I have no idea what they are doing .... it looks like they are suddenly killed by someone. Perhaps Magneto who is also present in the forest.

- Quicksilver has a scene set underneath the X-Mansion in the well known blue and white Cerebro corridor .... we basically see him run really fast down the length of the corridor and past camera right.

- Short glimpse of Psylocke from the waist up. Munn looks great here!

- The same goes for Lawrence who sports a leather jacket with studs and a short punk-y hairdo. Her role definitely seems smaller here compared to the other character's screen time in the trailer.

- Apocalypse can basically control all the other mutant's powers and we see him force lift Professor X's chair and pull it the lenght of the Cerebro corridor towards himself. No one is powerful enough to stop him.

- Apocalypse looks really out of place in the otherwise realistic setting in the movie. He looks much more blue than purple here, but with all the head gear and stuff .... well he looks pretty damn silly. Cool voice though by Isaac. He speaks in a bright and godlike tone of voice throughout.

- Professors X's eyes turn black using Cerebro and he says "I have never felt power like this". Apparently Apocalypse lends him these powers.

- As for the use of the F-bomb we have gotten two great line in both First Class and Future Past - this time we actually get it in the trailer as Fassbender's Magneto looks at Apocalypse for the first time and utters "Who the fuck are you?"

- And yes, we do get to see Professor Xavier in the chair .... bald. This is the last shot of the trailer and James McAvoy strikes a suitably iconic pose turning slowly towards the camera.


It all flew by pretty quickly. I guess the running time for the trailer is just shy of two minutes, and while it already feels pretty epic due to the number of characters alone, it is too early to say anything with almost no VFX present here. Only disappointment so far is the funky Apocalypse look ...

I go by Tannhauser

---  That's all I got...  Tannhauser - we love you, keep guard at those gates and let us know if you see C-beams glittering!