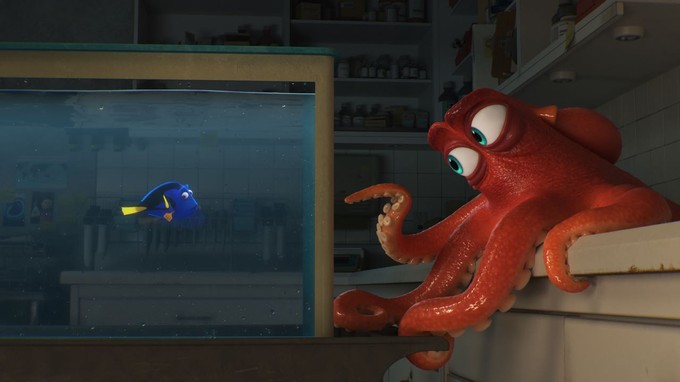 I never really considered this before seeing this teaser, but computer animation has made huge strides since FINDING NEMO came out 12 years ago. Look at the ocean floor and the definition on these characters; this is really striking and pretty, a way more significant improvement between any two Pixar sequels to date (though I remember thinking “Wow, the people look like people now!” in TOY STORY 2). That alone kind of makes me want to revisit this world of anthropomorphic sea life and the reefs, valleys, and fish tanks they inhabit.

As for the story, which apparently involves Dory using her hobbled memory to find her near-forgotten family members, I’m less impressed. Not only is it pretty close to the original’s premise of, you know, FINDING NEMO, but there’s only a few possible resolutions, and they’re all fairly rote. 1. She finds her loved ones, and they all become one big happy family. 2. She doesn’t find her family, and realizes that Merlin and Nemo are her real family now. Or 3. Her family sucks (maybe her memory loss is a coping mechanism?), and she accepts that she’s grown and moved past them, realizing (see number 2).

I’d like to think that Pixar has more up their sleeve than what I’ve predicted, but they haven’t shown any evidence in the past few years that they still have the lofty storytelling ambitions that defined their golden era (WALL-E, UP, TOY STORY 3). Granted, FINDING NEMO isn’t my favorite Pixar flick, and this flurry of sequels they’ve been cranking (and will continue to crank) out since TOY STORY 3 is turning me off more and more (though admittedly, I wasn’t nearly as taken with INSIDE OUT as I would’ve liked to have been, and I’m not too stoked for GOOD DINOSAUR), so this one’s already got an uphill battle with this particular viewer.

The question is whether kids who were too young (or too not alive) to enjoy FINDING NEMO when it came out will want to venture into the deep with these characters. And based on the look of this animation, and their use of the reliable comic talents of Albert Brooks and Ellen DeGeneres, it looks like they’ll probably score in that regard.