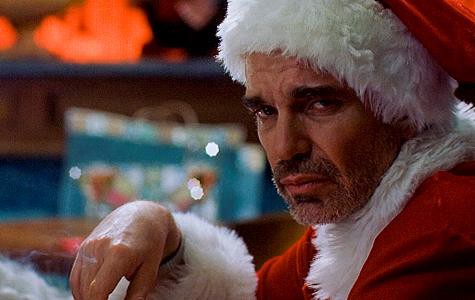 Ahoy, squirts! Quint here. You have no idea how much I love Terry Zwigoff's Bad Santa. It's a holiday staple in my household, so the news out of AFM that Miramax is gearing up for a return of everybody's favorite plus-size butt-loving Santa Claus makes me very happy.

Billy Bob Thornton is returning, but other than that details are light. No word on Zwigoff's involvement (if he's involved at all) or if anybody else will be coming back. Thornton killed it in the movie, but you can't undersell just how good Tony Cox was as his foul-mouthed elf sidekick.

I know bringing Marcus back for a sequel might be a little on the tough side, but it's not impossible.

I'm an optimistic guy, so I'm hoping for the best here. Willie's such an interesting character and so damn fun to watch that no matter what it's intriguing that we'll be checking back in with him. I imagine the little bit of growth he had in the first film is probably long gone by now, but you never know.