Sandler's controversial, star-studded straight-to-Netflix THE RIDICULOUS SIX gets a trailer! 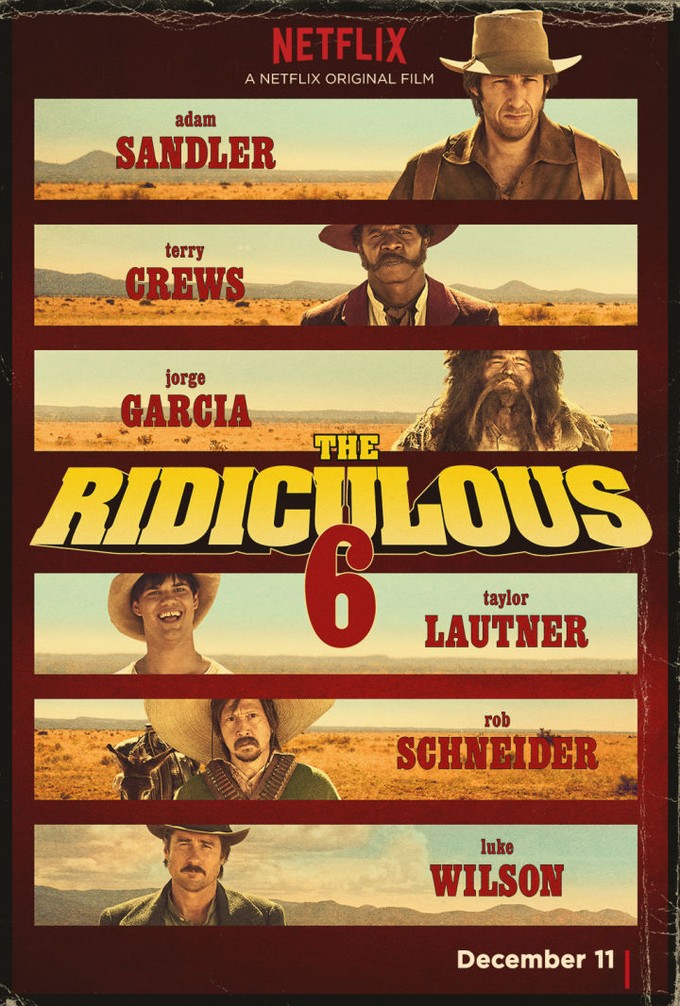 The main thing we’d heard about THE RIDICULOUS SIX up until this point was that it featured anti-Native American humor that was so juvenile and insulting that several of their extras jumped ship and ratted Sandler and his boys out to the press. This trailer sheds a little light on what we should expect from the actual flick: a western-set Happy Madison jam without the requisite hot chick co-lead but with higher production values and more big names than usual.

Now, everyone’s sense of humor is unique, and some may find this really funny, but from my perspective, this fares no better than the trailers for Sandler flicks like JACK AND JILL or GROWN-UPS in terms of laughs. It's pretty light on punchlines and focuses harder on the spectacle of the production…which, admittedly, is more impressive that I would’ve expected.

What is most eye-grabbing is the talent on display. Aside from the core six (including a doofy looking Taylor Lautner and an uncrecognizable Jorge Garcia), we get glimpses of Steve Buscemi, Will Forte, Nick Nolte, Danny Trejo, Harvey Keitel, John Turturro, Chris Parnell, Steve Zahn, and Blake Shelton, all hamming it up in ridiculous western getups. Plus, the credits also promise us Whitney Cummings, along with Sandler regs David Spade, Norm Macdonald, Jon Lovitz, and Nick Swardson. Now, an A-list cast certainly didn’t help A MILLION WAYS TO DIE IN THE WEST all that much, but that roster would certainly make this pill easier to swallow, wudn’t it?

This does look better and more like an actual movie than BLENDED, which I guess is a testament to Sandler’s collaboration with Netflix, so maybe this will be something other than the lame, offensive embarrassment that the early press (and, you know, Sandler’s past work) would make it seem.

THE RIDICULOUS 6 will get at least some folks waiting for HATEFUL EIGHT to watch it on Netlfix starting December 11th.