Why is IT FOLLOWS #7? Fire up the talkbacks, I’m sure this one will be a barnburner. Sure, many might rank this film among the top five or even top two, but I found the film to be somewhat problematic in the latter half which really took away my enthusiasm for the first portion of the film and the initial concept it plays with but doesn’t really delve into with too much depth. Still it’s got some fun scares throughout and the homage to films like HALLOWEEN and A NIGHTMARE ON ELM STREET give this precautionary sex tale some heft. IT FOLLOWS is always a film that fires up the talkbacks and I’m sure it will again with the haters vs. the lovers of this film. I still recognize this film as one of the greats for the unique nature of the sex/death scenario, an awesome soundtrack, and some fantastic acting from up and coming young stars. Here’s my review from July 20th, 2015! 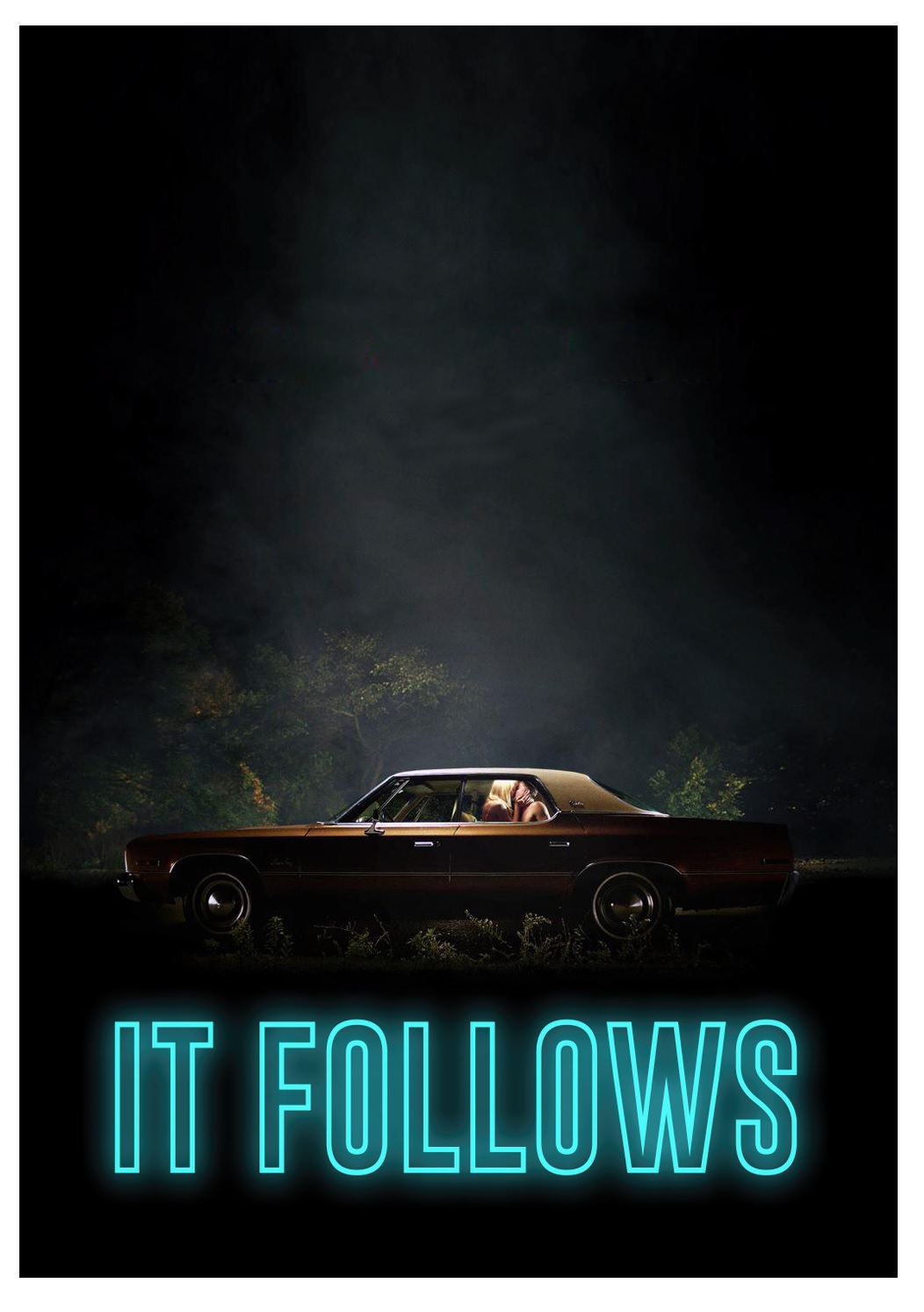 I stayed silent about one of the most talked about horror films of the year, mainly because I wanted to check out the film without the baggage of all of the praise. I saw the film in theaters a while back, long after it was released, but didn’t write a review, because I felt, in order to do justice for it, I would have to see it again as it is a depthy little film that deserves more than just a quick review. That said, I am one to occasionally be influenced negatively when a movie is praised so highly. Either it’s the rebel in me that doesn’t want to agree with the masses or just that I fine tune my critical eye to seek out weaknesses that I may give other films a pass on. Whatever the reason I haven’t covered IT FOLLOWS until it is being released on BluRay/DVD, I feel I’ve been able to view it a few times and sit with it long enough to properly give the film the dissection it deserves. 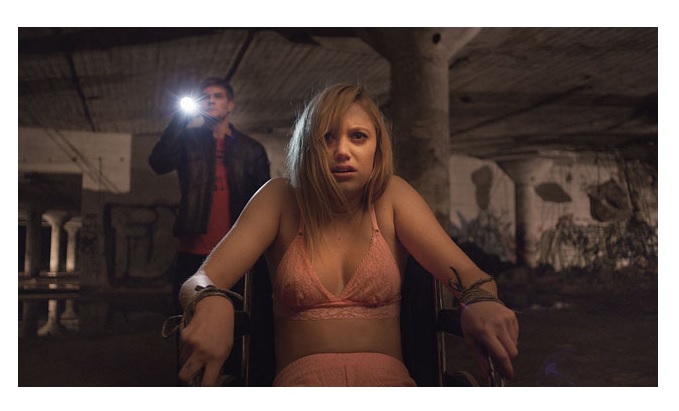 What makes IT FOLLOWS so good are many things. The soundtrack and score is utterly unique and can only compared to Carpenter-esque mood synth music. The characters and the actors playing them are likable, realistic, and relatable. And the premise is a winner in the fact that it is stylistically unique and metaphorically rich. I’ll be delving into all three of these aspects here as I feel that these are the things that make this film as effective as it is.

But before that, the main reason why IT FOLLOWS works, in my mind, is that it follows the tropes etched in stone by John Carpenter with HALLOWEEN almost as if it were following the film as a roadmap in the dark. In the original HALLOWEEN, the threat isn’t Michael Myers, but the Shape, a silent monster that stalks its victims. He is often seen in the background, obscured by the focus on the main characters oblivious to the approaching threat. Look at the scenes of the tree lined streets in HALLOWEEN as Laurie Strode and her friends walk home from school and compare them to the final scene in this film and they are structured almost exactly alike. Up to about the midway point and even a bit beyond that, beat for beat, key scenes in IT FOLLOWS can be almost replaced with scenes from HALLOWEEN and A NIGHTMARE ON ELM STREET. The classroom scene where the passages taught in class vaguely relate to the impending threat is featured in both HALLOWEEN and NIGHTMARE. Just like Laurie Strode and Nancy Thompson, IT FOLLOWS lead Jay (THE GUEST’s Maika Monroe) is barely paying attention to this important lesson being spoken to her in school and instead is distracted by the threat she sees out the window. Also like NIGHTMARE, Jay has a relationship with a boy across the street (Daniel Zovatto who even looks like a young Johnny Depp) and is unable to alert him as the monster gets closer to him. The similarities between IT FOLLOWS and HALLOWEEN and NIGHTMARE are abundant if you look for the tropes. 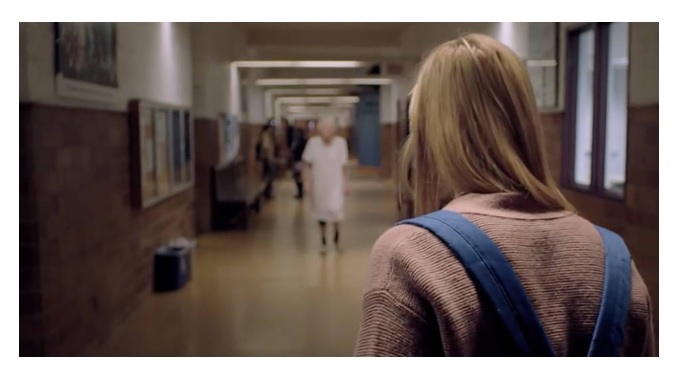 That’s not to say that IT FOLLOWS is not an original and amazing film. Horror is all about tropes; well worn avenues with which to build suspenseful situations. IT FOLLOWS just does this in a manner that is both reminiscent of some of the best horror films out there, yet still wholly original in execution. If you’re going to copy something, copy from the best and IT FOLLOWS pulls from some of the best films in horror in terms of story beats.

But it’s the music that helps set the tone from the first frame. Rich Vreeland aka Disasterpiece fills this film with resonant dread. Even in scenes that are meant to be lighter, as the kids are watching old horror films, there’s a dull din in the background. Much more subtle than Carpenter often in your face synth, Vreeland does a fantastic job of making this film sound so much different than any other horror film you’ve seen before. And while the attention to music and how it leads the tone is all Carpenter, again, this film takes that first notion and makes it its own pushing key scenes to deafening levels of suspense.

A good cast also helps and IT FOLLOWS stars some of tomorrow’s hit list actors. While everyone talked about Dan Stevens in THE GUEST, I was most impressed with Maika Monroe’s subtle and melancholy performance in that film. That spectral sadness is again conveyed in Monroe’s Jay, who is possibly a child of abuse herself as she lingers on the photos of her father and reacts to the follower who looks like him with such terror. Jay is likable and plucky, but still carries with her a heft that most kids her age shouldn’t have to carry. For such a young actress, she is believable in every scene she is in and carries this entire film on her shoulders. Big things are in store for Monroe and it’s fantastic to see her in these genre films. But around Monroe are equally talented actors. DARK SUMMER’s Keir Gilchrist does a fantastic job without many lines himself. He says it all in the way he looks at Jay and while at times he is somewhat creepy, it’s interesting to see that Jay had a follower even before the curse was put upon her. Seeing Gilchrist’s Paul change from creeper to hero in this film is a somewhat wobbly road, but he makes it work. The third actor to stand out for me was BENEATH’s Daniel Zovatto who looks so much like a young Depp, it’s uncanny. Again, this is not a flat character. Zovatto’s Greg is somewhat noble, but also a player. He’s likable, but dangerous. It’s the same kind of complexity that Depp conveyed early on before he got all Burton-esque. Finally, I can’t fail to mention Olivia Luccardi who plays a small role here as the quirky Yara, but her character is so odd with her thick glasses and clamshell iPhone that she feels as if she has a story of her own going on outside of this film and it’s equally interesting. 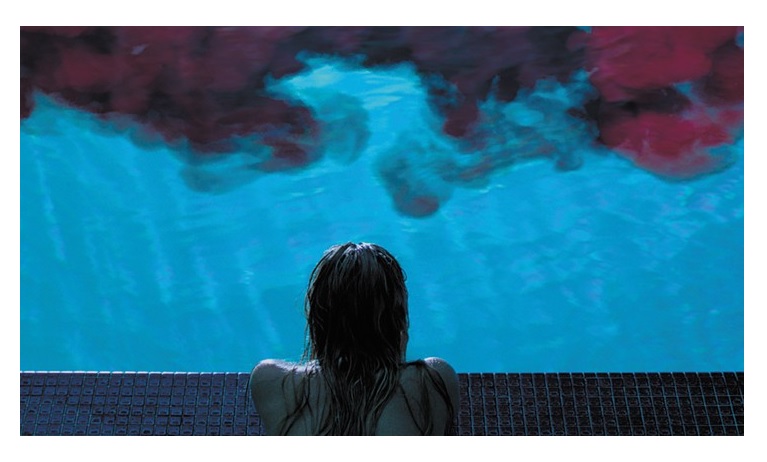 But the real thing that sets IT FOLLOWS apart from the rest of the hook. Sex and death is a metaphor often played with in horror, but this film links the two in a way that is truly original and because of this concept that a curse can be passed on through sex is so distinct, immediately making me forgive the film for any aping it does to horror classics. Writer/director David Robert Mitchell has come up with a winner of an idea. An endless paper trail of sex and terror that goes back to an unknown and dark infinity that is never dealt with in this film. The threat plays on urban legend. It is relevant to the times we live in. And also hits that emotional core of the risk one takes giving their heart and body to someone and how that trust can be manipulated and damaged. The creativity behind the threat itself is what makes IT FOLLOWS stand out as one of the best horrors of the year.

So while there is a lot of familiar aspects to IT FOLLOWS, the film manages to add enough elements (music, cast, hook) to make it seem like something wholly original. The film comes with a few features, one of which is a commentary track from AICN’s very own Quint (Eric Vespe), among other horror critics talking about much of what I have discussed above. IT FOLLOWS may follow the blueprint of great horror films, but it does so with style and flair that makes it hard not to watch and love. 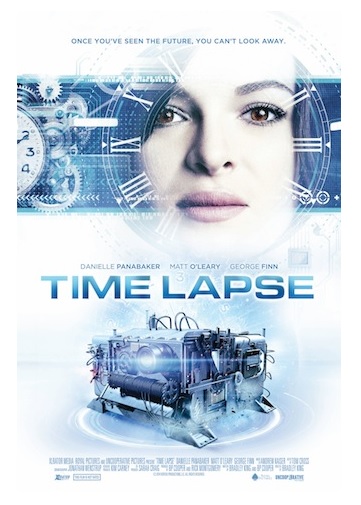 Unfolding like a classic Hitchcock murder mystery mixed with a fun TWILIGHT ZONE episode, TIME LAPSE’ main strength is in the trio of lead actors; Danielle Panabaker, Matt O'Leary, George Finn who discover a camera which takes photos of the future and find a way to make a profit from it. Of course, it all backfires and the fun is seeing how it all swirls down the drain between these three flawed human beings. The ending is a little too stylized and makes a few leaps that don’t make sense, but the trip there makes this violent and character driven sci-fi flick worth noting. Check out my full review of the film here and you can find it Available on iTunes here and Netflix here!