Why is CUB #8? The campground is a setting often visited in horror films. Revisiting fears from childhood sparked by spoken campfire tales and sleeping in unfamiliar surroundings is the perfect storm to take us back to a time when we were vulnerable and more things scared us. CUB captures that spirit perfectly telling the tale of a troubled boy who doesn’t fit in with the rest of his cub scout troup and his fairy tale like discovery of a feral boy in the woods. Add some awesome Rube Goldberg style traps and some gory kills and this is one horror story with a lot of bite. But the little nods to horror and fairy tale is what makes this little campground slasher film worthy in the top tier of this countdown. Here’s my review from August 21st, 2015! 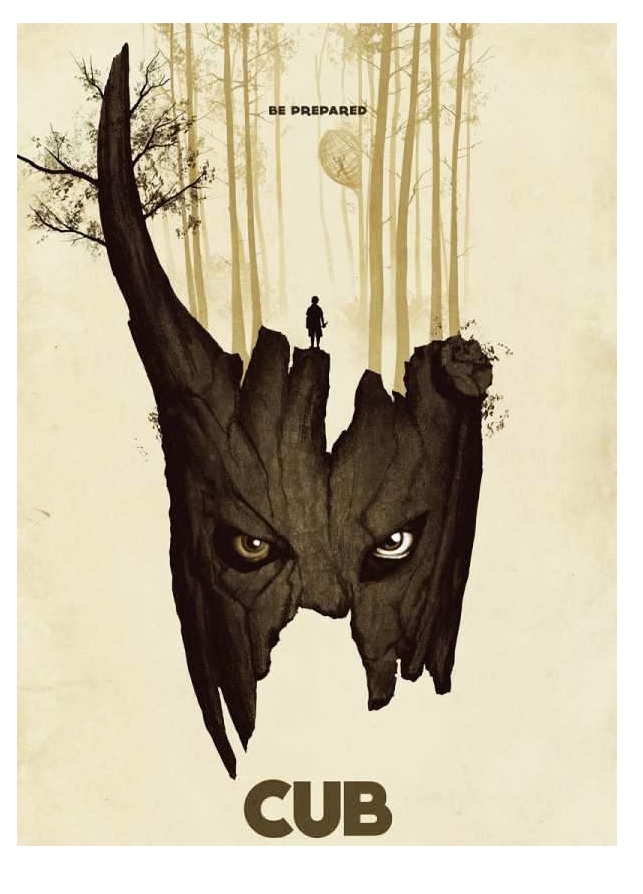 Sometimes when you mix different colors it all turns out looking grey and colorless. But sometimes, when the right elements are blended, something brilliant is made and that’s what CUB turns out to be. By snagging little bits of ideas from here and there, CUB ends up being something wholly original and entertaining from start to finish. 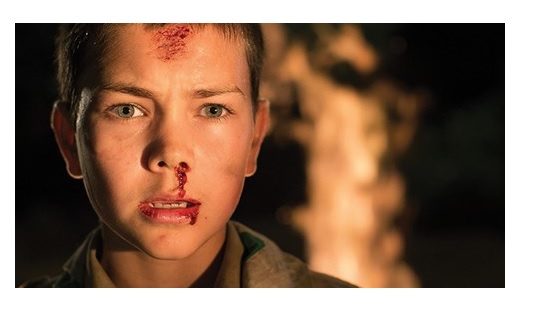 CUB is an excellent Belgium film focusing on a young and troubled boy named Sam (Maurice Luijten) who just doesn’t seem to fit in with the rest of the scouts in his cub scout pack. He also annoys the hell out of his scout leaders as his inquisitive nature leads him astray from the carefully made plans of the counselors to make out in the woods and goof off while the scouts are busy doing foresty shit. When Sam begins seeing a boy just about his age creeping around their campground (Gill Eeckelaert), the counselors write it off to his overactive imagination and a result of a campfire story they tell the scouts about a wolf-boy named Kai in the woods. But this feral child exists and uses Rube Goldbergian traps and his jungle prowess in order to hunt and kill anyone who enters the woods. With his scout leaders and peers not believing him about the boy-monster in the woods, it’s up to Sam to save the day. But is he sane enough to do it?

This film is brimming with ideas that feel innovative and cool. While the concept of the feral child has been done before in modern fables such as THE JUNGLE BOOK and LORD OF THE FLIES, it feels fresh here setting it against a woodland horror backdrop. Placing kids in harms way is something Spielberg cut his teeth on in Amblin, and to a point, this film has an Amblin feel to it as these kids seem to really be in danger. But there’s a point in this film where the stakes are raised and kids do die which makes the horror feel all the more palpable and real as you just don’t see that type of horror in American films. The death toll is surprisingly high here as Sam’s battle against the Cub and his even more evil Master up the ante of the hunt and take it from the thick forest to their expansive bunker under the woodland floor. The action in CUB is as intense as the horror comes from how brutal the action beats climax to. This is no slasher film where the killer stabs someone and they fall dead immediately, in this film, the horrors last long and it takes much longer for people to die, which makes it much more impactful and real. 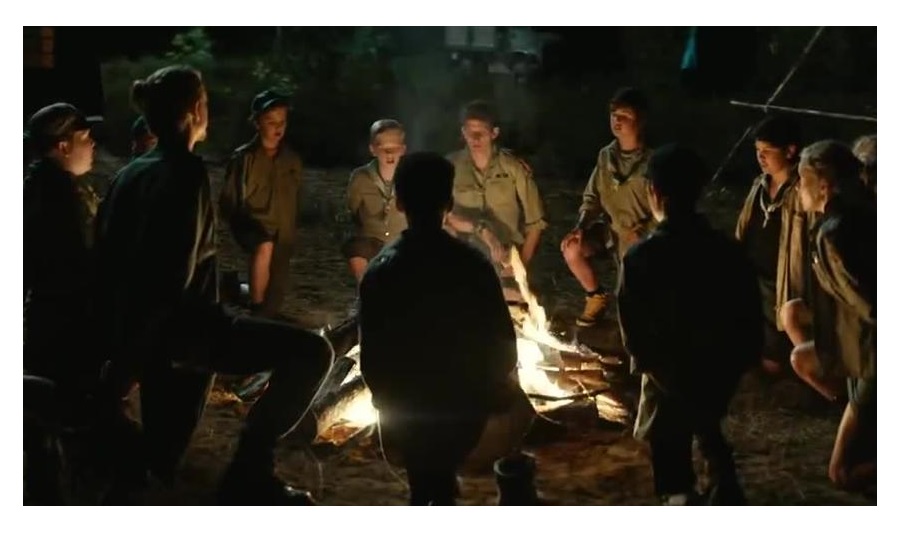 But on top of the brutal action and violence prominently on display in CUB, the filmmakers litter the film with all sorts of nods and homages to the source material and influences. The whole film takes place in Castleroque, a nod to Stephen King’s Castle Rock; a locale of choice for many of his stories. The counselors in the film are named Baloo and Akela, two of Mowgli’s animal advisors from Kipling’s THE JUNGLE BOOK (a story I am quite familiar with having written my own trilogy of comic book miniseries based on the tale). Baloo’s dog in the film is named Zoltan after ZOLTAN THE HOUND OF DRACULA (reviewed here), which shows that this filmmaker’s roots run deep in horror. These little nods to other works could come off as lame attempts to refer to better material, but here it works in that the movie is just as formidable and fun without it, but made more so because it is letting us know where the inspiration for the film lays.

CUB is a brutal piece of cinema and highlights a true force of nature in terms of filmmaking by director/writer Jonas Govaerts and his co-writer Roel Mondelaers. From start to finish, this is a film that moves at a rapid and dangerous pace. And though there is never a dull moment, CUB is also dripping with character as we really feel for Sam and his evolution from picked on outcast to savior and beyond. Young Maurice Luijten reminds me of the grit and toughness you saw in a young River Phoenix and offers up a powerful performance here as Sam. Most of the time when kids act tough in films, it’s done so to be cute and done for laughs. Here, Sam is in a fight for his life and though his stature is small, he gives his everything to survive and attempt to save his cub-mates and counselors. This is the level of danger you just don’t see in mainstream films. 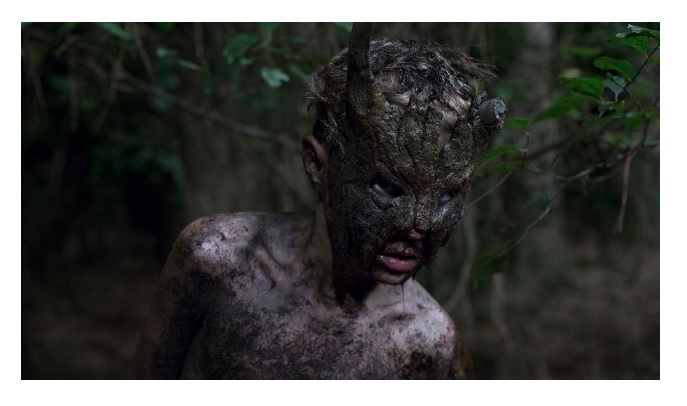 I loved every minute of CUB. It’s a brutal and intense tale that proves that with a little creativity, age old horror tropes like “the killer in the woods” tale can still be interesting if someone puts their brains to it. It’s too bad someone can’t put this type of storytelling and quality into a FRIDAY THE 13TH film as this film pretty much encapsulates a “young Jason in the woods” motif. If the producers of the F13 series had a brain in their heads they would recruit Govaerts and Mondelaers now to do decent turn with Mr. Voorhees.

I can’t recommend CUB enough to fans of horror. It’s the kind of film that doesn’t come around often and though it’s not in English (a turn off to some viewers, but not myself), it’s one of the best horror films you’re bound to discover this year. Overstuffed with cool moments, breakneck action, and tons of the red stuff, CUB is a film that will knock you on your ass no matter how prepared you think you are.

Another film that just missed the countdown was DER SAMURAI. It’s about a feral monster in the woods that represents the feral monster in the protagonist himself is the descent into madness film, DER SAMURAI, a German film which is as much a visually unique as it is unique in the story it tells. Depicting the struggle a one man between his own homosexual and heterosexual drives, DER SAMURAI is not breezy horror by a long shot, so don’t expect jump scares or any cheap thrills like that. This is a complex and dark tale full of blood, swords, and violence at an operatic level. Check out my full review of the film here and you can find it on iTunes here!