Why is THE FINAL GIRLS #12? Any self respecting horror fan out there has a love and respect for FRIDAY THE 13TH films. Despite it’s flaws and despite it’s shortcomings, horror would not be what it is today without those films. The folks behind THE FINAL GIRLS know this and celebrate that in hilarious and often ingenious ways. I laughed quite a bit at this film, but really sealed the deal with me was the fact that this is a film with a lot of heart, a lot of talent, and a lot of smarts behind it. For some, SCREAM was a film that resonated with them and the way they view horror films, but I felt it was much more apathetic and callous towards horror, almost making fun of it. CABIN IN THE WOODS was a step in the right direction, but if you want to watch a film that honors and cherishes horror, THE FINAL GIRLS is it. Here’s my review from September 11, 2015! 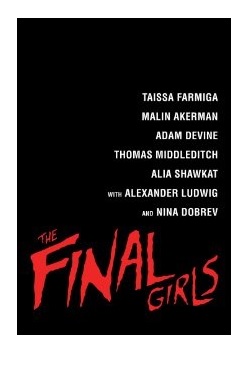 Knowing nothing about this film going in is the way to enjoy it the most. So if you don’t want to be spoiled in the least, know that THE FINAL GIRLS is good. Surprisingly good. So surprisingly good that it’s the type of film I can’t wait to pass on as a recommendation to friends. It’s a fantastic love letter to the slasher film that manages to pay homage without making fun of it. If you’re a fan of slasher films, then do everything and anything you can to see this film. Skip past my review below and just see it. OK? 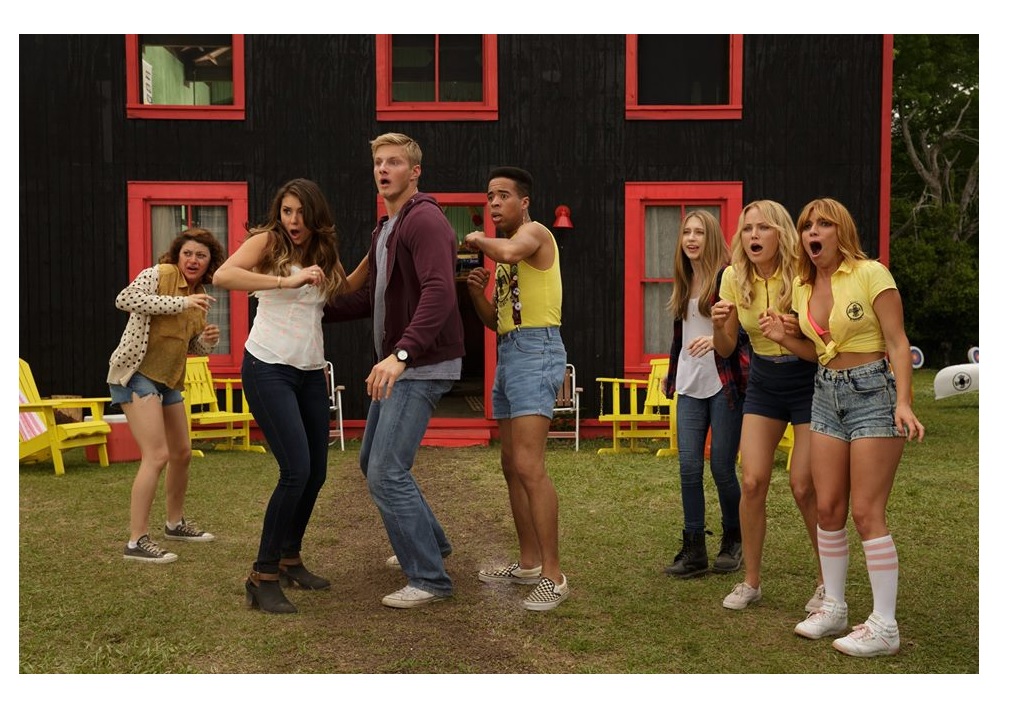 Now for those who have seen it or those who don’t care about spoilers, here’s the synopsis. AMERICAN HORROR STORY’s Taisa Farmiga plays Max Cartwright the daughter of a famous scream queen from the 80’s named Amanda (WATCHMEN’s Malin Ackerman). When her mother is killed in a car accident, Max is devastated, of course and when the film geek brother of her friend Gertie (Alia Shawkat) finds out who Max’s mother is, he flips and invites her to a movie marathon celebrating her mother’s most famous role CAMP BLOODBATH PARTS 1 & 2. Max tentatively agrees to go with her friends to the show and marvels at her mom on the screen, but when a fire breaks out in the theater, the only way out is through the screen and Max and her friends end up trapped in the movie. Now they have to prevent the nubile youngsters, including Max’s mom, from following horror movie conventions in order to keep everyone safe and survive until the end of the movie.

Meta, yes. But while SCREAM made fun of the genre for its conventions, there is a quality about this film that celebrates all of the great stuff that goes on in those conventional horror movies. Though it obviously follows the FRIDAY THE 13TH formula right down to the machete wielding masked man monster wronged as a kid, THE FINAL GIRLS also pays homage to THE BURNING with the origin of its slasher Billy Murphy (Dan B. Norris). Rules of who fits the final girl template are mapped out pretty concisely here and it really feels like writers M.A. Fortin & Joshua John Miller and director Todd Strauss-Schulson know and love these types of horror films as much as you and I do, celebrating slasher tropes such as have sex or show your boobs, you die, rather than ridiculing them for being there as the SCREAM films did. 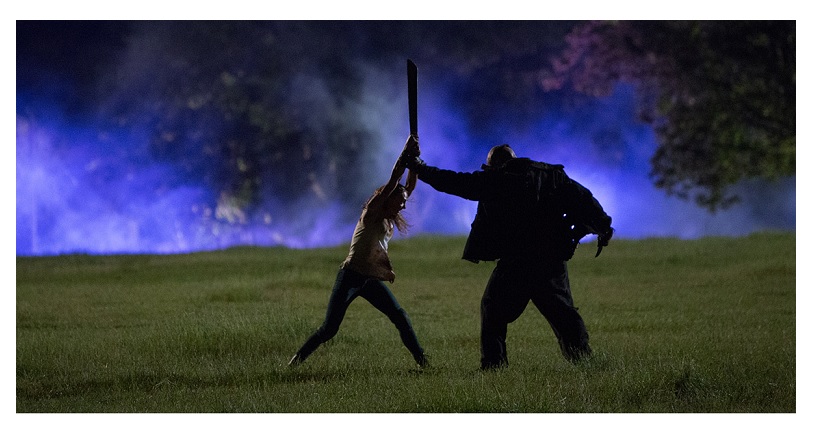 But this mirthful trounce through the merry world of slashers wouldn’t be anything without the fantastic cast, all of which deliver comedy straight to your face. While there is plenty of over the top comedy, again, none of it is mean-spirited. It’s not going to make you leave this film feeling ashamed to be a fan of the slasher genre. In fact, the cast, the comedy and the story will make you love the slasher films and maybe even respect them even more. This is all due to fantastic comedic performances by fantastic Malin Ackerman, WORKAHOLICS’ Adam Devine as the overly-horny counselor, SILICON VALLEY’s Thomas Middleditch as the overzealous horror fanatic, and SILICON VALLEY’s Angela Trimbur as the counselor spastically eager to take her top off. Balancing out the comedy though is a surprisingly effective beating heart and soul in the performance of Taisa Farmiga as Max. This could have easily been a soulless comedy, but Farmiga beings depth to the movie as she is conflicted with seeing her mother (Ackerman) again after she had lost her in real life. The relationship between Ackerman and Farmiga grabbed me on an emotional level I wasn’t expecting. Both actresses show depth here that I hadn’t seen in their prior performances and director Strauss-Schulson deserves a lot of praise being able to balance not only the horror and comedy, but also some extremely strong and effective emotional beats in this film which only heightened my investment in the film.

The slasher films finally have their WIZARD OF OZ in THE FINAL GIRLS, a fantastic foray into a magical and fantastic world that just happens to be haunted by a seven foot man-monster with a machete. The comedy hits the mark, I’d say 90% of the time, and if the big beating heart this film possesses doesn’t reel you into the story, you might need to check your pulse. The final act of the film even manages to be pretty scary and action packed as director Strauss-Schulson (who previously only directed one film prior to this one, A VERY HAROLD & KUMAR 3D CHRISTMAS) swoops the camera around at breakneck speed and puts out masked killer in actions that highlight how cool he can be. In a year where there isn’t a FRIDAY THE 13TH film for fans to enjoy, THE FINAL GIRLS is the next best thing and is probably the most gripping, fun, and exciting film of this type in ages. This is the film that deserves all of the praise films like CABIN IN THE WOODS and SCREAM for taking a look at the genre through a meta lens, but this film honors the proud tradition of the slasher in modern horror. It’s the type of movie that makes me proud to be a fan of horror. I can’t recommend this film more. See it, horror fans. I think you’ll love it as much as I did. 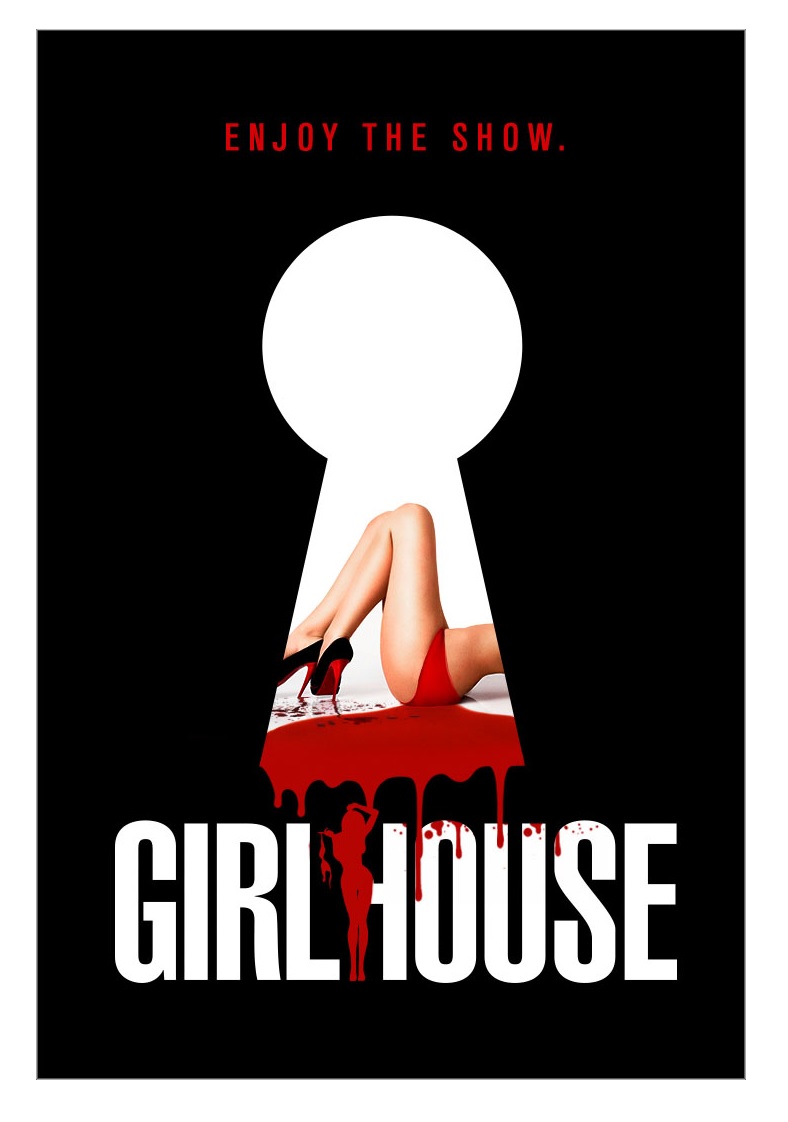 Not really self referential or meta; just a straight up slasher in the house flick, GIRL HOUSE has everything a slasher film should have and then some. It’s got a super creepy killer and some very brutal kills, making it one of the better slalk and slash films over the last year. Many films tried to introduce us to the new Jason or Freddy, but the killer in this film (who goes by the name of Loverboy) is the closest thing to a new iconic slasher of the year. Check out my full review of the film here and you can find it on iTunes here!