Why is A GIRL WALKS HOME ALONE AT NIGHT #15? Delicately told from a hip and fun perspective, Ana Lily Amirpour is a breath of fresh air for the often stale vampire tale. Filmed in black and white with very little blood or gore (save for a chomped finger or two), this film is charming and gorgeous. While it meanders a bit in the midsection, the rich imagery and subtle performances make this vampire love story something for those who don’t normally like horror and offers up enough freshness for old school horror hounds to feel like they aren’t watching the same old Dracula tale again. Some might place this one higher on the list, but that’s just a testament to the horrors to come. Here’s my review from November 21st, 2014! 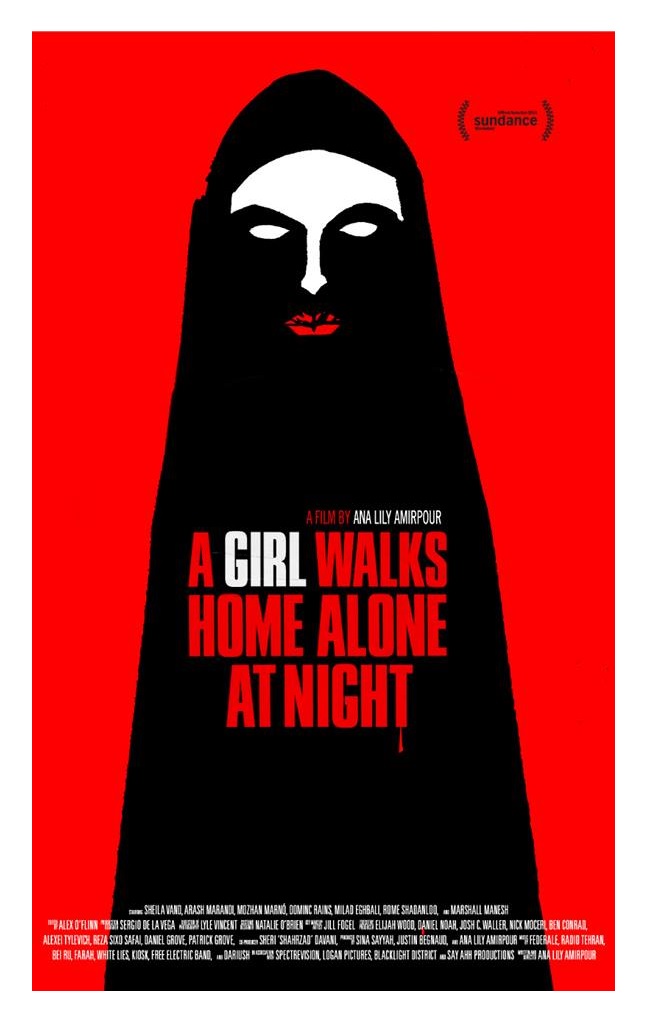 People talk to much. In movies. In books. In comics. Gab, gab, gab. Jaw, jaw, jaw. Blah, blah, blort. Why say something directly when you can stammer out 150 more words to describe it? That seems to be the motto of most writers (and most people) these days as the cinema, book and comic pages are filled with words and words. It takes a film that revels in the silences and the unsaid to really bring notice to that, but A GIRL WALKS HOME ALONE AT NIGHT did that exact thing for me. 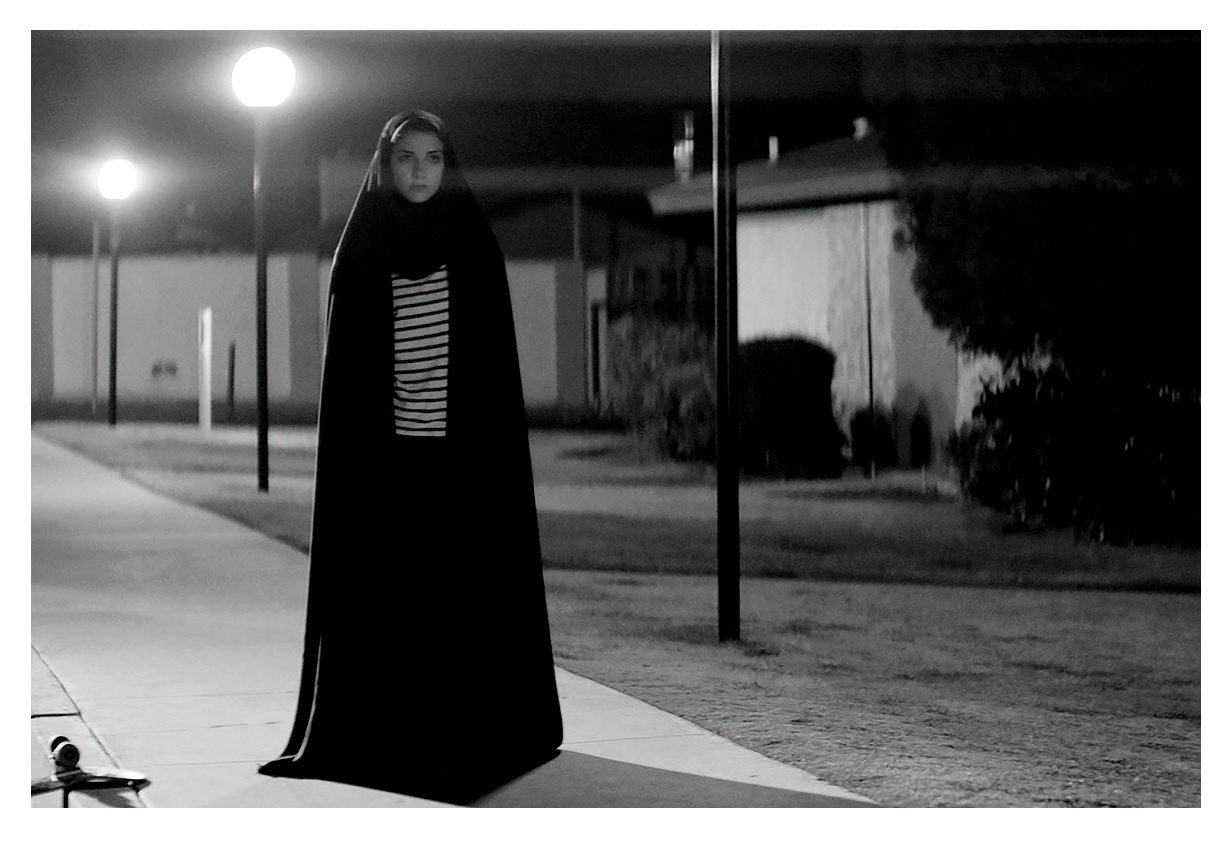 Written and directed by Ana Lily Amirpour, A GIRL WALKS HOME ALONE AT NIGHT is rich in theme involving women’s rights and Iranian culture, but it was the stylistic choices Amirpour chooses is what really interested me in this film. This is a patient movie. One that allows you to settle in and soak in the atmosphere of the oil drills plowing away in the background like a heartbeat rhythm of the fictional locale known as Bad City. While this city might be as nameless as the Iranian vampire (played amazingly by Sheila Vand) who walks the streets at night like a ghost collecting the blood of the not-so-innocent, enough is given to make it feel like the wrong side of the tracks in any town in the world. This is a place filled with quiet streets, where people hide behind their doors and those out at night are most likely either the cause of trouble or about to get into it.

That’s where the girl (Vand) meets Arash (Arash Marandi) a mid-level drug dealer and all around nice guy. Arash is tormented by his asshole drug boss and cursed with a father who is addicted to the very drugs he pushes. One night, while drunk and high, Arash meets the Girl and while this would normally be an occasion for the Girl to have another meal, something else happens. Yes, this is a love story between a vampire and a human, but before you roll your eyes and try to lump it in to a bundle with TWILIGHT, understand that the handling of this budding relationship between Arash and the Girl is much more realistic and mature than the overwrought with angst and overworded with romantic babble and pablum you see in most Hollywood films.

Here it’s the lack of words that gives this film power. Glances, recognitions, and realizations don’t need to be explained because Amirpour captures so much in a slow bat of an eyelash or a tilt of the head. Most of the real story beats of this film happen without dialog. Vand’s Girl is a woman of very few words, but when she does talk, it’s mesmerizing. The final act of this film is practically wordless as two lovers make a realization of what they are and decide if they can accept that or not. It all plays out in a beautiful silent barrage of emotion and depth. Plus the reaction of the cat in the final scene is pretty damn priceless.

Everything about this film feels new and somewhat trendy, which isn’t always a bad thing, reminding me of the slick feel of Refn’s DRIVE. Much can be said about the silences, the vampirism, and how that relates to the culture of Iran in relation to women and I’m sure it can be said much better to me. But this film struck me in its ability to capture my attention from start to finish with a mesmerizing and star making performance by Vand and gorgeous black and white scenes by Amirpour. With a hip and trendy soundtrack filled with Iranian music, this film is bound to strike the fancy of those who like their vampires with a little edge. Gorehounds might be a bit more disappointed here as aside from some cool looking choppers the Girl sports, there’s very little by way of blood. Still the image of the Girl wearing her chador like a vampire’s cloak is a pretty effective and terrifying one cast against the dark streets of Bad City. Seeing her flit like a ghost and calmly stalking her prey is chilling without having to see copious amounts of grue. So while fans of the more extreme kind of horror or those looking for a jump scare every five minutes might be put off by the patient and more introspective mannerisms of A GIRL WALKS HOME ALONE AT NIGHT, but those looking for some emotional meat in their films and appreciate the beauty as much as the beast will definitely want to seek this one out. 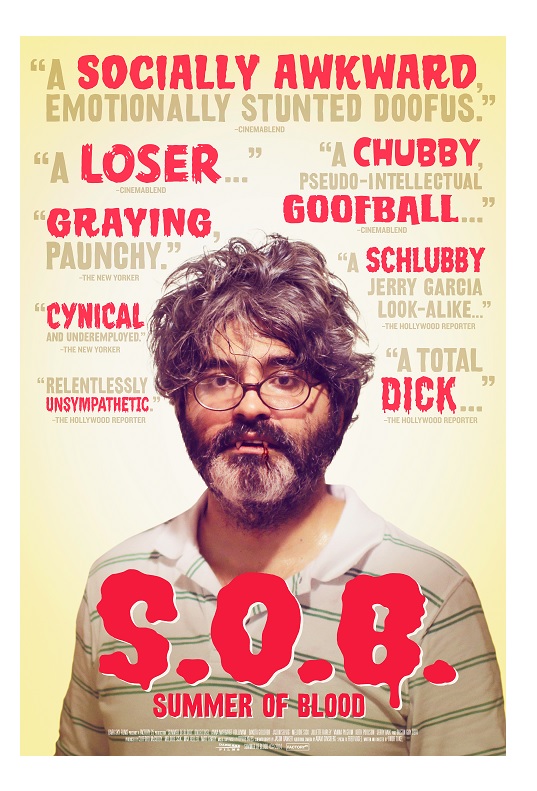 Worth noting: SUMMER OF BLOOD!

This blood drenched version of CURB YOUR ENTHUSIASM hit all the right notes for me. Omar Turkel is going to be grating to some, but just like Larry David, he is blatantly honest with whatever urge he may be feeling and isn’t afraid to confront people about it in his own mumbling, bumbling way. Like A GIRL WALKS HOME ALONE AT NIGHT, this is another unconventional take on vampirism for those sick of the same old story. Check out my full review of the film here and you can find it on iTunes here and Netflix here!