Hey folks, Harry here...  Before reading this review, realize, while I don't give specific spoilers from the film outright, I do make reference to classic films and their plotlines which are at times similar to things happening in Del Toro's CRIMSON PEAK.   Suffice to say, this is a Gothic Romance littered with Suspense, Horror & Adventure.   It is an elder tale and that's just fine, but this review is best saved til that future time when you can read this with no fears of spoilers.   Thanks for reading... 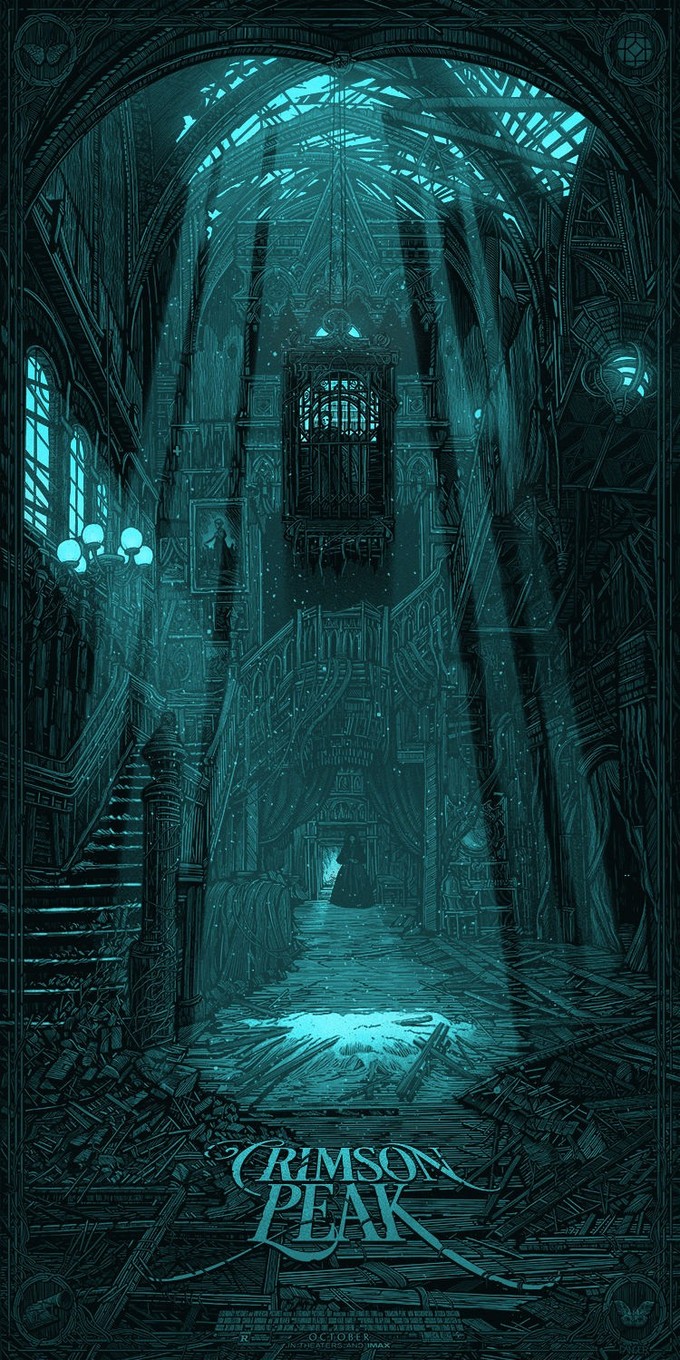 When I saw CRIMSON PEAK, I had very little warning.  Guillermo Del Toro was being particularly sneaky this FANTASTIC FEST with his film.   As a result, Yoko and I haven’t spoken since she missed this… I jest…  but, it is her most anticipated film of the year.

I honestly didn’t know the Secret Screening was going to be CRIMSON PEAK, but I suspected.  I figured that Guillermo and Tim were likely to pull the wool over my eyes, Tim did that with JJ on STAR TREK, and sure enough – they were up to it again.

The film is being sold as an out and out HORROR film, but CRIMSON PEAK is quite a bit more.   This is a lavish cinematic banquet set with exquisite detail by a man that knows how to serve every course for an evening of gothic romance and suspense filled adventure horror.   But this isn’t a film that’ll make you scream.  It’s the kind of Del Toro film that you’re meant to savor.

The tale of CRIMSON PEAK plays with Bronte Sister haunted/madness themes, but it also reminded me in a more abstract way of Alfred Hitchcock’s NOTORIOUS.  Because I most definitely feel that Mia Wasikowska’s Edith Cushing reminds me of Ingrid Bergman’s Alicia Huberman.   Both characters are romanced whilst mourning the loss of their father’s.   In Mia’s case, her father isn’t a Nazi – and it isn’t family shame that haunts her memory and bids her to leave her world behind for the embrace of a handsome foreign stranger with a darkness that feels familiar in a world gone mad.   Mia’s Edith is a girl with tragedy in her past.  She’s drawn to ghosts as Ingrid Bergman is drawn to Nazis.  Now…  Imagine if you will, that in Guillermo Del Toro’s immaculate haunted NOTORIOUS, if his Hitchcock Blonde didn’t have to romance the exquisite Claude Rains…  but a man that more than a few can imagine devilish carnal delights from.   We’re talking about LOKI here…  Tom Hiddleston, but he’s in full woo mode.  And it’s his twisted Sister pulling his strings into a web to catch a windfall fortune to support their own – dark lifestyle.

I love it.   I see the deconstruction and integration.   The home that Edith Cushing is whisked off to, married to the oh so perfect Tom Hiddleston as Thomas Sharpe… well… it is a corpse of a grand mansion set atop a mine of red clay… ALLERDALE HALL is its proper name.  Which explains why Edith didn’t immediately run for dear life.  Also, she has prior encounters with the supernatural.   And it isn’t the dead she should be fearing.   The monsters in life are usually filled with blood and can occasionally smile.   In this particular notorious tale of Del Toro’s – Thomas Sharpe and his sister Lucille Sharpe – played wonderfully by Jessica Chastain, she’s always watching, serving, being sweet, to cover that bitter taste of death she’s dealing.   The horror of Hitchcock’s NOTORIOUS was that moment of realization for his dear Ingrid Bergman…  when she realized that not only was she being poisoned, but that everyone feigning care for her was in on it.   Now in Hitchcock’s film, it feels less impactful because Claude Rains and his mother…  Not only are they Nazis, but it’s fucking Claude Rains…  I mean, he totally would’ve played LOKI to Flynn’s THOR. (Boy that’d have been trippy in I.B. Tech – of course Lee & Kirby hadn’t done it yet, but fuck it, it’s my fantasy dammit!)

In Del Toro’s film, the GHOSTS serve as the mystery with the Wine in NOTORIOUS.   The ghosts would make most grown men cry with fear if they actually saw them in reality, but Del Toro isn’t playing them for scares…  They’re the melancholic flavor of frustrated spirits not at rest.    They’re pushing her down a rabbit hole of discovery.   A mystery that keeps Edith distracted long enough to get caught in the Sharpe sibling’s silken web of death.

Now the film…  it’s a pure beauty.  Guillermo put acid in the emulsion cuz the colors pop like BAVA meets CORMAN’s HOUSE OF USHER.   Like a tale from a different age, there’s a young handsome doctor investigating the death of Edith’s father played by the wonderful Jim Beaver, whom you may remember fondly from DEADWOOD.   His investigation serves as a hope of rescue, but he’s an ocean voyage away in America – and as we learn more and more about what poor Edith is up against…  well, she’s pretty fucked.

Guillermo’s Ghosts are a puppets performed live on set, costumes worn on set – all enhanced with stylized ethereal effects work that makes it all feel otherworldly.   Personally I celebrate that we’re not looking at shade monsters or alabaster skinned black eyed ghosts.   These delve more into the lurid psychotronic variety of spirits – but they’re Guillermo’s red handkerchief he waves about on stage.   While you watch the ghosts, while you stare into the shadows of ALLERDALE HALL, known to the locals as CRIMSON PEAK….  Just keep sipping your drink, eating your popcorn.   Yeah, be worried about the ghosts… not… what made them.

There’s also more than one ghost story going on here.  Edith Cushing was haunted long before she met the handsome man trying to save his family’s name and estate.   And Thomas Sharpe is haunted by more than mere ghosts.   They’re a wondrous pair, these two.   Each born and raised in darkness, destined to wallow in it for eternity in Guillermo’s Gothic Whimsy.

CRIMSON PEAK – as written by Guillermo Del Toro and Matthew Robbins (DRAGONSLAYER)  and lensed by Dan Laustsen (BROTHERHOOD OF THE WOLF, SOLOMON KANE, SILENT HILL & MIMIC) is a masterpiece of robust novelistic cinema.  Sit back and let Del Toro tell you this tale.  It has twists and creaks and screams and blood.   It has fears aplenty and dangers most dire.  But the real tragedy is… What if Ingrid Bergman had really loved Claude Rains and if Claude Rains looked like Tom Hiddleston?   I love it.   I love it in my marrow!

I truly love this movie!  We rarely see anything like it, and when you realize it was made for around 5 times less than most of the blockbusters you’ve seen this year – I think we see the magic of Guillermo’s latest.   It’s exquisite through and through! 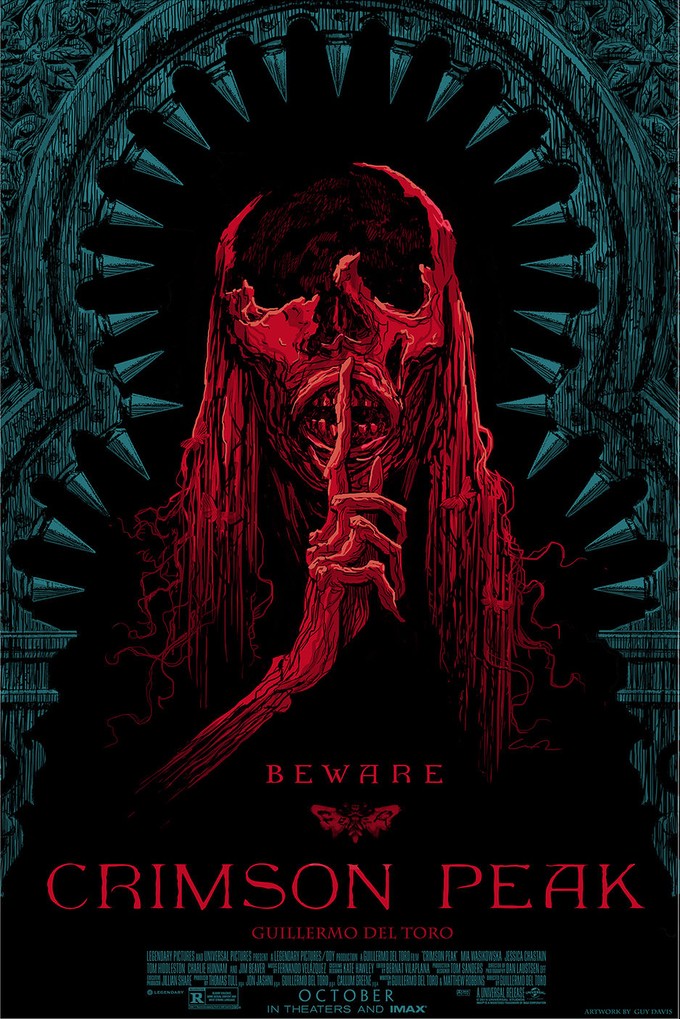