Why is EXTINCTION #22? Zombies have become passé, it seems, but when the right director and actors get together, it still can be pretty damn awesome. EXTINCTION is one of five zombie films that made this year’s countdown (I already named DEAD SNOW 2: DEAD VS RED) and it is a visual masterpiece with some very strong performances by Matthew Fox and Jeffrey Donovan. The film is bleak and has the zombies evolve into something far more evil, which brings something new and fun to the genre. Here’s my review from July 31, 2015 ! 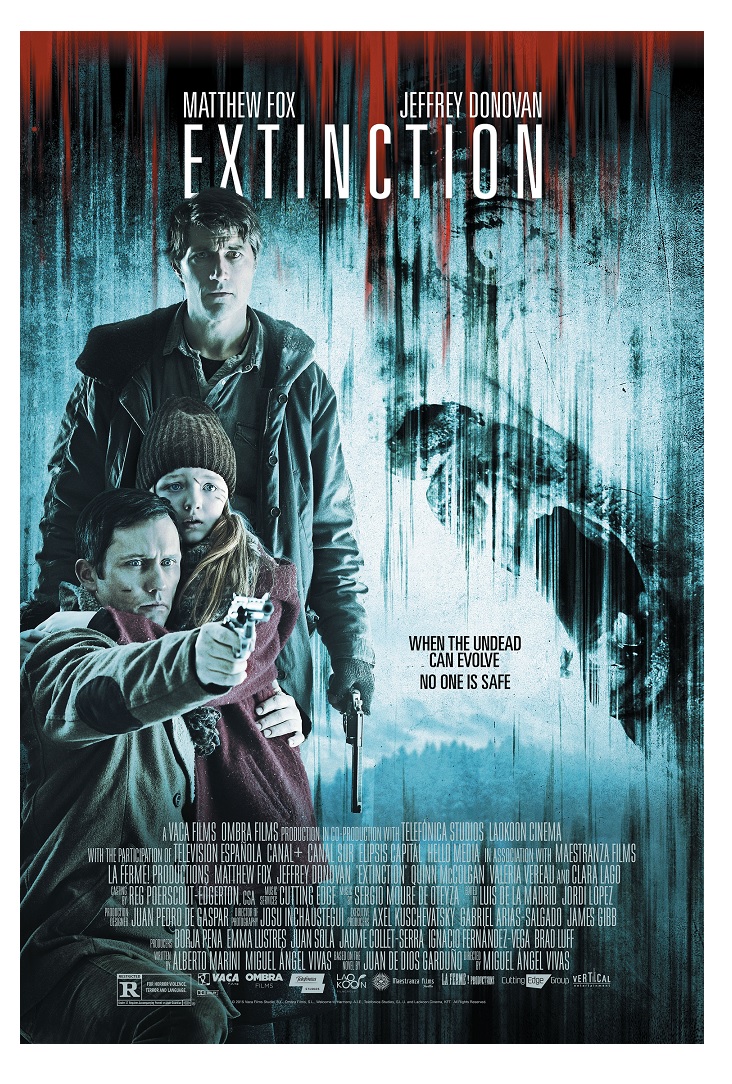 While zombie movies have become passé these days, I really think folks are just sick of uninspired zombie films retreading material we’ve seen a thousand times before. Add a new element or give it a new spin and zombies can be just as terrifying as any old monster. This is the case for the excellent new zombie flick EXTINCTION, which may have a somewhat uninspired name (I kind of like the original name of the film WELCOME TO HARMONY myself), but it delivers on just about every level a good zombie movie should.

The film opens with Patrick (LOST’s Matthew Fox) and Jack (BURN NOTICE’s Jeffrey Donovan) packed into a school bus filled with people on their way…somewhere. Right off the bat we are not really told what type of film this is, but you definitely know the mood is dire and everyone is terrified. When the bus ahead comes to a stop the second bus becomes even more concerned, and when one of the armed soldiers goes to investigate, an outbreak occurs and we see how fast this undead virus passes from one person to the next as well as how violent these infected become. Reminiscent of the outbreak scene in 28 WEEKS LATER, this opener packs a huge emotional and suspenseful punch and is an excellent opener to the white knuckle intensity that follows for pretty much the entire film.

Skipping ahead nine years, the situation has changed dramatically with Patrick and Jack not talking to one another and the baby who was born in the first moments of the film, which happens to be Patrick’s, is now being raised by Jack. This nine year old child named Lu (Quinn McColgan) is full of energy, questions, and a streak of rebelliousness that strikes the fear of god in Jack, whose rigid and controlled lifestyle has been crucial in surviving in this post-apocalyptic world. Though something has happened in between the opener and this new time in which the story takes place, the viewer isn’t let in on the secret until much later. The relationship between Patrick, Jack, and Lu is the driving force for the film and it’s a strong one as Patrick and Jack seem to have a bitter hatred towards one another, but not so much that Patrick has moved any further than the house across the street from where Jack and Lu live. Drinking the nights away and reaching out on a ham radio to find survivors, Patrick is a shell of a man in an arctic northern tundra seemingly far away from the threat of the infected. But when a naked and pale monster in the shape of a man crawls around outside in the snow sniffing for prey, it looks as if the infected have evolved into something even more menacing and adapted to the cold weather, posing a new threat that might be just the thing to repair the three’s strained relationship. 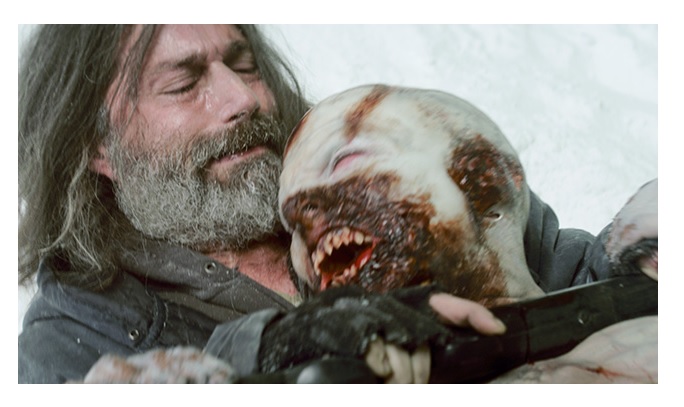 Matthew Fox and Jeffrey Donovan are fantastic here as best friends pushed apart by the toll of the plague that befell humanity. Fox is soulful and grief-stricken at what he has lost (at times reminiscent of the season on LOST where he returns home and is down and out), but retains his humor at times which comes out as he plays loud music and gives mock radio shows to no one drunkenly over the loudspeakers surrounding his home. Next door, Donovan’s Jack is trying his best to keep a rambunctious pre-teen entertained, educating her to survive, but also trying to be the father Patrick is not able to be. The contemptuous relationship between the two is amazingly fleshed out and really makes for some fine drama as these two are avoiding one another but can’t bring themselves to move away from one another given that they need each other to survive. Even as bitter enemies they have each other’s backs, and there’s something awesome about how this movie conveys this relationship.

The zombies themselves have evolved into something much more threatening in EXTINCTION. Reminiscent of the underground monsters from THE DESCENT with their noses and lips frost burnt off, these creatures make this much more threatening than your usual zombie fodder. The way the creatures move, interact, and attack are all unique, which also makes this zombie film so good and unlike the rest. 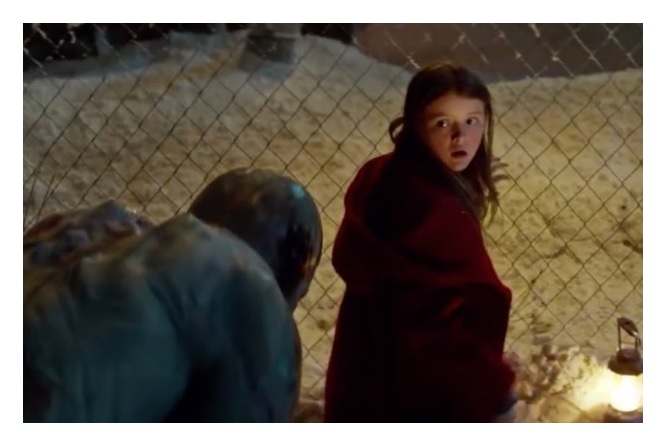 The arctic setting is another win for this film, as I have a tendency to love most horror films set in the snow. Something about the bitter cold and the stark landscape that looks innocent but is deadly adds to whatever beastie is lurking about in the shadows. Here the bitter cold is used as protection from the monsters, but as they have evolve it becomes just another obstacle for our heroes to be entombed in as the monsters descend on their homes.

Director Miguel Ángel Vivas has delivered a gorgeous movie which soaks in the golden sun, the twinkling and stark snowdrifts, and simple settings within the homes. Vivas also delivers all the right emotional beats that made me fall in love with these characters and root for all of them to survive. The climax of the film is jaw-droppingly good as Vivas splits the action into three locales, moving the camera through walls and across spaces vertically and horizontally to take in all of the action. It’s the type of sophisticated storytelling through camera movement you don’t normally see in films and a true indication that Vivas has many amazing films ahead of him.

So don’t be scared away thinking EXTINCTION is just another zombie movie. It’s filled with amazing action, drama that will make your heart swell and burst, and monsters that have evolved past your typical zombie fodder. If more films evolved the zombie concept like this, much of the stigma attached to zombie films would be dispersed. As is, EXTINCTION is an amazing little slice of cinema that thrills on all levels. 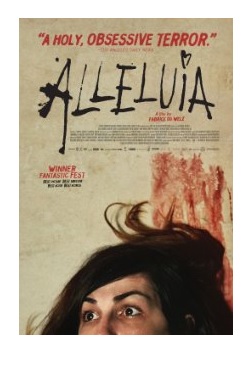 I just recently reviewed this and it just missed the list by a bit, but ALLELUIA is a harrowing tale of twisted love and lust. Based on a true story, you’ll wince at the horrible decisions made by the lead who desperately wants love and will even kill to find it. This French film is amazingly shot and the story pulls you in and stabs you in the heart. Check out my full review of the film here and you can check out the film here on iTunes!