Why is THE GREEN INFERNO #26? Just making it onto the countdown as it was released on the last week of September 2015, THE GREEN INFERNO is a film that people hate even though they haven’t seen it, which is a shame because it’s not a bad movie. In fact, it’s probably one of the best produced and executed cannibal films you’re ever going to see. For some, that’s like saying it is the best root canal you’ve ever experienced, but for fans of cannibal films like me, it was great to see the tropes I’ve experienced in so many poorly made cannibal films play out through Eli Roth’s lens. Here’s my review from October 2th, 2015! 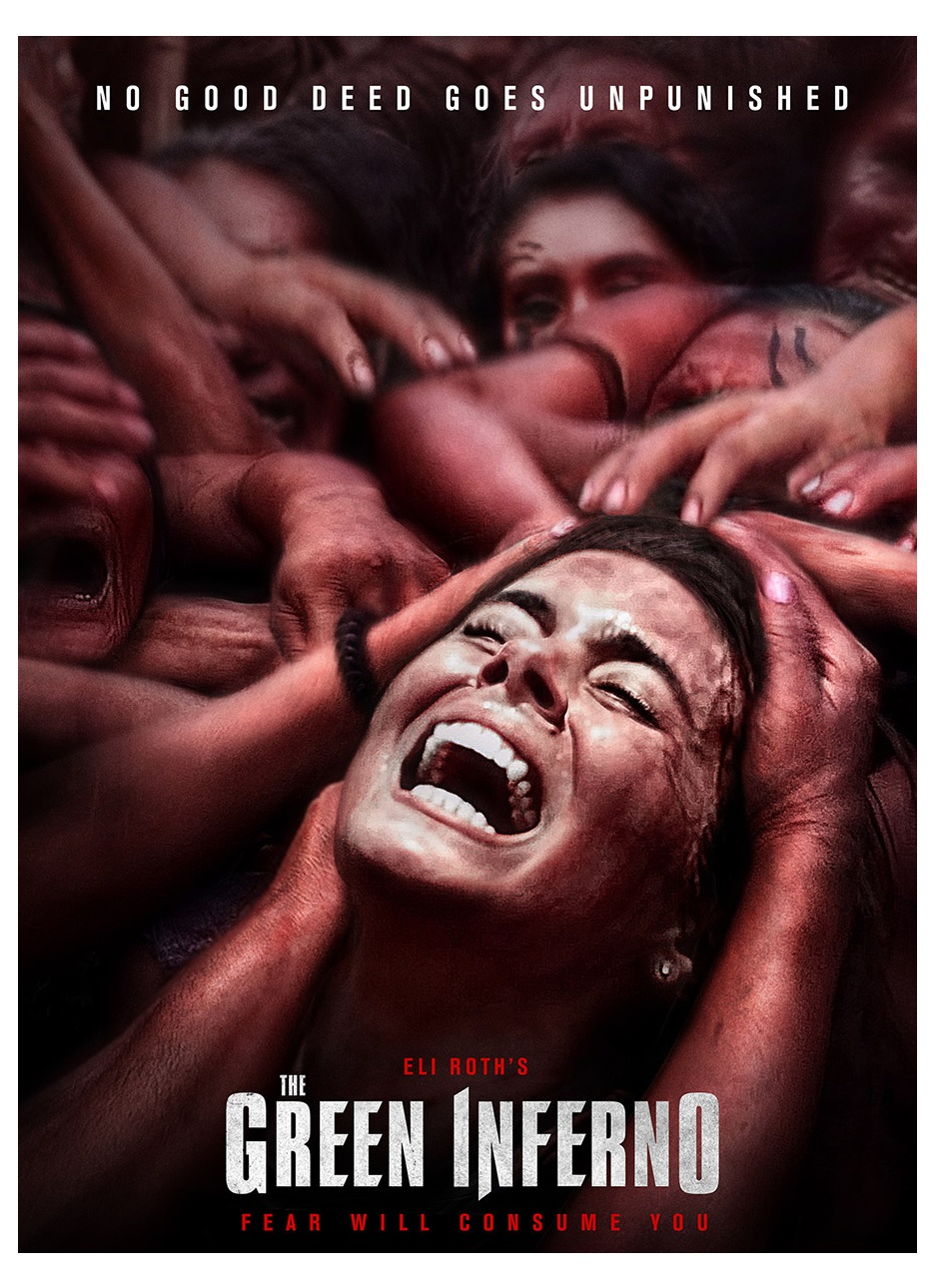 It was interesting to me reading the talkbacks after Capone’s review of THE GREEN INFERNO the other day. The talkbacks lit up with a lot of Eli Roth hate and a lot of ire towards cannibal films in general. Now, I understand why folks might not like cannibal films. Some people have a tolerance for those types of films (I’m one of them that is pretty fascinated with the subgenre of horror) and others hear the premise or even the notion of cannibalism and immediately start up the negative responses. I understand that cannibalism is a taboo subject and there is also a form of prejudice going on with these types of films, but still, 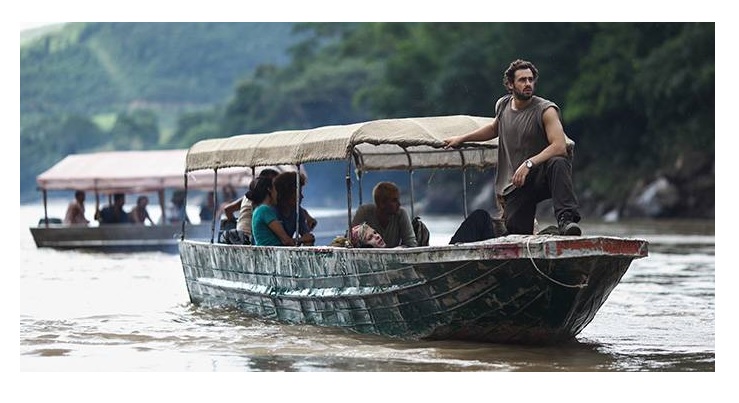 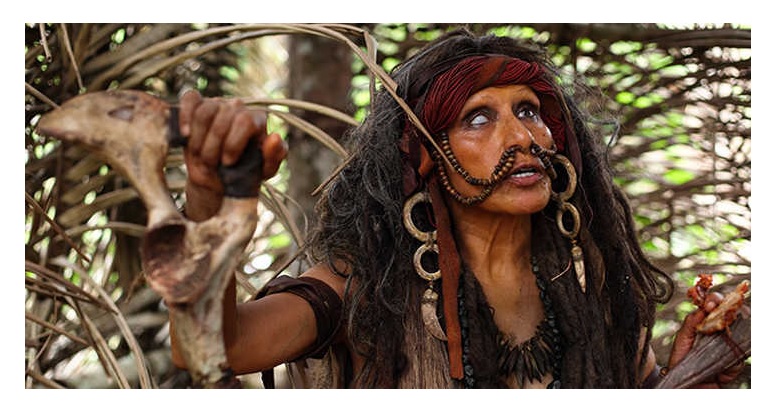 THE GREEN INFERNO is a film that again owes a lot to Eli Roth’s love of classic Italian horror. For the most part with a little modern tweaking to make it more timely, the film follows the template of so many cannibal films before it. Basically, the entire point of the film is to get a bunch of “civilized” folks to the middle of the jungle so they can be captured, tortured, and eaten by the natives. THE GREEN INFERNO goes a little deeper into the lives of its well intentioned cast of characters. Justine (Lorenza Izzo) is a wide eyed Freshman looking for some kind of cause to latch onto and attracted to campus rabble rouser Alejandro (Ariel Levy) who organizes protests like health care for janitors and the like. Disgusted by a class that goes into gory detail about vaginal mutilation in tribes across the world, Justine latches onto the latest cause Alejandro and his protesters have chosen, saving a native tribe on the Amazon which are in danger of extinction as government officials are destroying the rainforest and any tribal camp that gets in their way. Justine convinces her father, a United Nations official (Roth regular Richard Burgi), that the trip to the Amazon will be safe, but as soon as they land it is apparent that everything is not on the up and up. Tossing themselves in between construction workers and militia and the trees they plan to destroy, Justine and the protesters end up attaining their goal to raise awareness by live tweeting and filming this event, but their victory is short lived as their plane crashes just as they take off and they end up in the clutches of the very tribe they came to protect. Things pretty much go downhill from there.

The thing that should be noted here is that this is probably the best produced, best acted, and best effects in any cannibal film ever made. For that alone, I have to give this film a positive nod as I am a fan of these cannibal films, but will admit that most are shittily put together and acted. Roth does a great job of soaking in the vibrant green landscape the film is named after. In contrast, the clay covered natives red skin gives them an alien feel which immediately suggests danger. It’s this simple color palate that makes this film beautiful to look at. Even the gore, which there is plenty of, is represented in vivid Italian film crimson, again a standard in these films. Roth definitely shows he can capture imagery in a grander scope here, something a lot of horror filmmakers often have difficulty with as horror is so often an intimate experience. 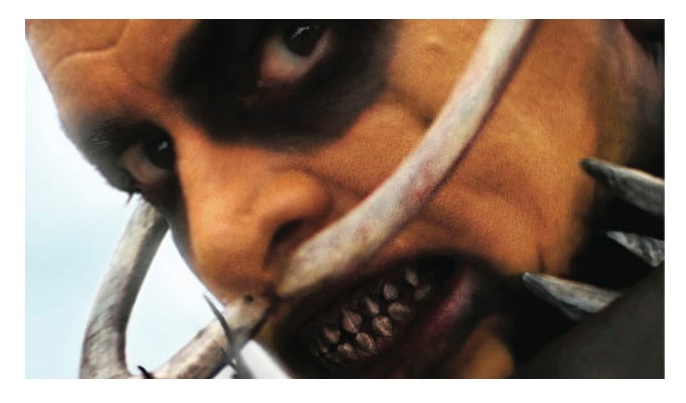 All of the cast do a good job here at being scared out of their minds and the indigenous tribes that filmed with the crew do a great job as well. Izzo is definitely the highlight here as she is expected to endure the most and go through the most complete arc coming into this job as a wide eyed virginal nube and ending up much more wiser to the gray shaded world around her. Izzo’s wide eyes were most likely the thing that got her the part as she is taking in everything for the first time with fascination and innocence. The rest of the cast is decent as well with Levy’s Alejandro providing some nice beats as a completely arrogant asshole and some more sincere moments from Aaron Burns as Jonah, the stereotypical fat kid with a crush on Justine. Comedic beats are provided pretty much solely by SPY KIDS’ Daryl Sabara and he is pretty funny as the cocky weed smoker. The other two performances of note are Ramón Llao as the Headhunter and Antonieta Pari as the Elder but while these performances are good, most of the scares comes from the costume design making them look like paint covered monsters.

This film is definitely a devious one in tone and theme. It’s not the deepest theme, but one that I never get sick of, that being the hypocrisy of man. Having literal babes in the woods go save the “poor” savages has been a common misconception for hundreds of years. Religious groups have just been replaced by social justicers who often naively pontificate just to hear their gums flap. Again, this isn’t a new theme (hell it was the prevalent theme of the last RAMBO film), but it still is a powerful one to see these folks eat crow while they are being eaten themselves. 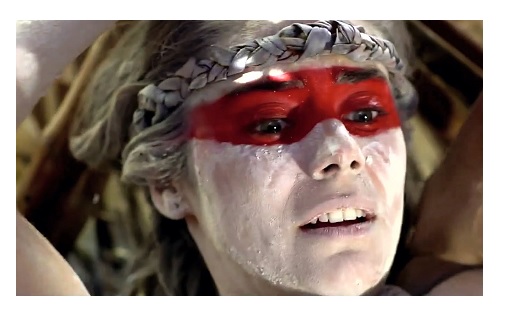 My criticism in this film does lay in the fact that Roth repeats himself here in theme and basic story structure. Once again, a group of tourists go where they are not supposed to and are captured and tortured for an extended length of the film. The change in locale makes it feel somewhat different, but taking a longer step back and it’s not that much different than HOSTEL. Also, apart from the social justice angle, the film really serves as a greatest hits version of every other cannibal film you’ve likely seen from Italian horror cinema.

Still, there is something to be said about being the latest, best looking, and highly produced cannibal film you’re ever likely to see. The gore is very gratuitous, but while it will gross out teens who have never watched a cannibal film before and consider the height of horror to be the INSIDIOUS movies, it really doesn’t go any farther than most other gorefests readers of this column would likely see. THE GREEN INFERNO is a well made cannibal film. There’s even a guide to the history of the cannibal film towards the end of the credits. If you don’t like Roth or this subgenre of horror, it’s not going to do anything to convince you otherwise. But if you’re a fan of either and both, I think you’ll be impressed at the quality of Roth’s homage to a type of horror film he obviously cares quite a bit about. 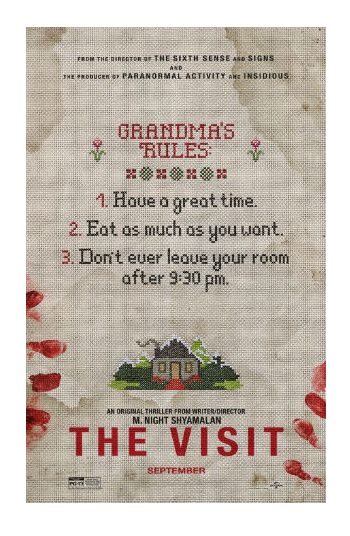 Worth noting: THE VISIT!

Another film from a modern horror filmmaker of note is M. Night Shymalan’s THE VISIT, which isn’t a perfect movie by a long shot, but is a step in the right direction from a director in need of a hit. THE VISIT ‘s main problem is its overly cute Spielberg kids who just weren’t believable to me, but it did have some solid scares and really highlighted some of my own fears that have to do with the elderly and growing old. It wasn’t necessarily good enough to make it to this year’s top 31, but it is worth noting as a somewhat successful little fright flick from a director who hasn’t caused much of a ruckus with his last few endeavors. Check out my full review of the film here and you might be able to catch this film in theaters still if you’re lucky!