BEYOND FEST '15: Vinyard revisits EVIL DEAD I and II with Bruce Campbell and Sam Raimi in attendance! 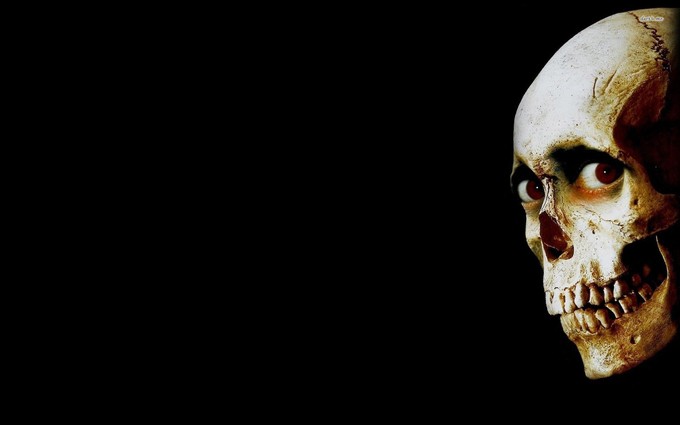 Like pretty much everybody reading this, I’ve carried a long, deep love for the EVIL DEAD series.

Perhaps it’s because of its very particular (and totally inconsistent) blend of comedy and horror. Perhaps it’s because of what host Edgar Wright mentioned, that it’s a franchise that doesn’t “pick off” its characters, but continually picks on its resilient, but tortured protagonist. Or perhaps (most likely), it’s because of Bruce Campbell’s career-making performance as beleagured S-Mart employee and power tool expert Ashley J. Williams.

Regardless, I’ve seen these films countless times since my first experience with EVIL DEAD I as a pre-teen (when, even watching on my laptop and during the daytime, I still managed to get freaked the hell out). ARMY OF DARKNESS probably got the most play, due to a combination of how many versions have been released, the easy-breezy tone, and my need to show the film to absolutely everyone I knew, closely followed by EVIL DEAD II. I’d only seen the original all the way through maybe three or four times before last night. That has less to do with my opinion of the film than my preference for II and ARMY’s badass, take-charge Ash to the helpless, lovey-dovey, clutching-his-axe-in-terror Ash of the first film.

But seeing the first two films back to back in a theater with two EVIL DEAD noobs definitely changed my perspective a little bit.

EVIL DEAD plays interestingly in 2015. It’s a rough-around-the-edges, obviously cheap film, and there’s no getting around it. The audience giggled at the stilted line readings, occasionally awkward dialogue, and the more inexplicable character decisions. But the weird thing was that I don’t think that killed the atmosphere. The film is crafted with such intrinsic dread, such a deep sense of “how fucked are these kids?” that you could still feel the tension in the audience, even in between fits of laughter. It’s how I’d imagine SCREAM played in ’96 before its style was carbon-copied ad infinitum; you laugh because it’s funny, but you are still very much on the edge of your seat, feeling the terror of the doomed characters.

Weirder still, for the first time in my life, I 100% felt that EVIL DEAD was the superior film. Now that I’m slightly older, I can separate the dopamine-rush pleasure of Ash self-actualizing into a deadite-killing uber-badass from the experience of watching the film as a whole, and I have to say that I did not feel the sense of immersion or tension that I got when the original was playing. EVIL DEAD takes five kids into the woods, and Raimi & co. give you the idea that none of them will make it back to civilization alive (surely, if no sequels had been made, you’d probably assume they didn’t). EVIL DEAD II starts with one guy, who we quickly see is able to scrap his way out of being possessed/killed by these things. There’s never the sense that Ash is going to bite it, and the slapstick comedy of him losing his mind and getting the ever-living shit beaten out of him doesn’t have the punch that it would if you felt that this guy really might not make it through the film.

Even though my two fresh-eyed comrades had been warned that the tone would radically shift between all three films, I still felt their disappointment when the heart-pounding intensity of ED I didn’t carry over to the sequel. Sure, it’s funny as fuck, and there’s no substitute for an audience full of people going nuts for the “Groovy,” sequence, but it doesn’t quite grab you by the short-and-curlies the way Raimi, Tapert, and Campbell did on their first-go around 6 years prior. I could care less about the new characters; aside from Knowby’s daughter, they all literally only exist to get killed, and they’re all (particularly Bobby Joe and redneck Gary Sinise) played so broadly that I found myself repeatedly asking the movie, “Pleeease, cut back to Ash.”

I don’t know why, but I’d never noticed that you can clearly make out Ash in the “prophecy” Annie Knowby reads from the torn-out Necronomicon pages. “Didn’t do a very good job,” indeed, Ash. 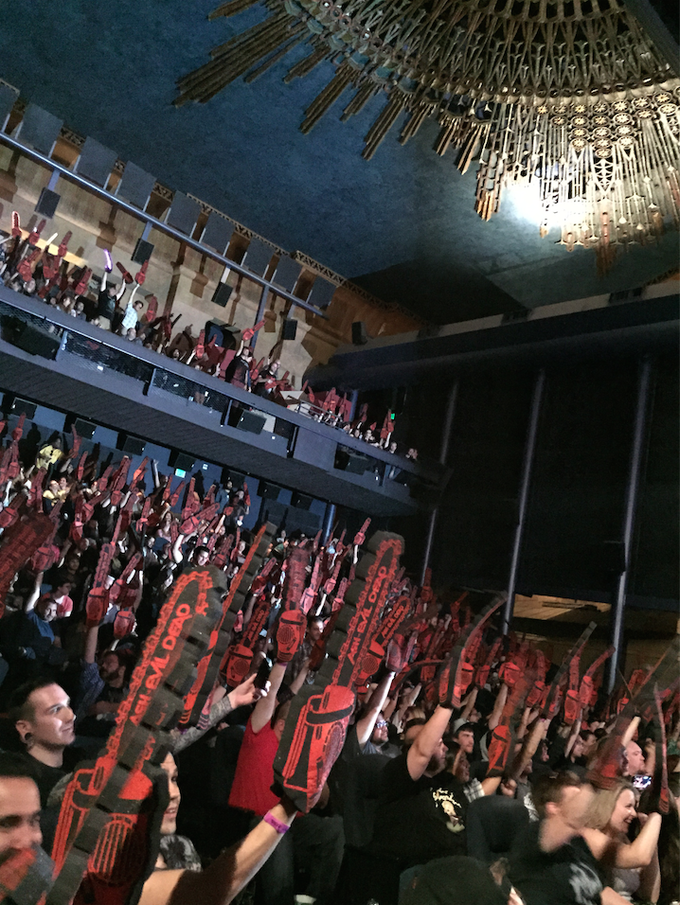 Aside from seeing these two classics on a big screen in glorious 35mm, the big draw of this event was the mid-film interview between Edgar Wright and Bruce Campbell. Campbell, looking dapper, energetic, and healthy, was on stage for maybe 2 minutes before saying that he “found someone with a bottle in the alley outside, and said, ‘Hey, isn’t that Sam Raimi?’” And sure enough, he brought out surprise guest Sam Raimi out to a standing O.

The two were undoubtedly up there, in part, to promote the upcoming ASH VS. THE EVIL DEAD, but their camaraderie and intimacy would be evident to even a casual observer. These guys have known each other in high school, and have been telling stories together for over 35 years. This crowd didn’t have a chance.

Campbell talked about the first time he met Raimi, when the two were both in high school. Campbell remarked that the first saw Sam on the floor, playing with a buncha dolls, and his first thought was, “Alright, walking around that guy…” Raimi, not missing a beat, explained that he was using the dolls for some stop-motion footage. As many know, the two started making movies together very young, constantly switching roles; Campbell, who had pretty much as much behind-the-camera experience as Raimi, was only selected for the lead in ED because “the girls liked him.”

Campbell, seemingly spontaneously, told a story that challenged that notion. He gleefully told the crowd that he was a virgin until he was 23; “So that guy was a virgin,” referring to himself in the first film. Then he said that when he did lose his virginity, it was with co-star Ellen Sandweiss, though it was after the shoot and not on the set, “Even though I was trying the whole time on set.” But apparently, Raimi was getting all sorts of tail all through college.

Raimi: “Girls would like Bruce right until he opened his mouth.”

They relayed several oft-told stories about their experiences raising money for the first film. One guy they asked refused to watch their preview reel made for investors; he didn’t much like horror movies, but had a couple of his associates watch the film, and ended up investing based on their recommendation. Another guy only threw down money because he was golfing with one of the investors, and thought, “Hey, a horror movie? Sounds like fun!”, and sent them a check (they’re not sure if he ever saw the film, but they do know he cleared about 75k on his initial couple thousand bucks).

Edgar Wright asked about the increasingly crazy camera angles that Raimi uses, and Campbell reflected that because the shoot went long, they were constantly losing cast and crew members to paying jobs or simply their real lives. He recalled that many of the investors thought that the Dutch angles and bizarre sound effects when Ash is alone in the cabin made things too experimental, and wouldn’t play to audiences. “And it’s the best sequence in the movie.”

They talked about their influences, particularly TEXAS CHAINSAW MASSACRE and HALLOWEEN, but Raimi said that he learned more from bad movies than good movies. They’d go to drive-ins constantly to see how the horror films played with audiences, and during the schlockier films, he’d pay attention to when the audiences would tune out. He noticed that during some scenes (particularly long dialogue exchanges), the audiences would turn their headlights on and flash out the screen, but would snap back to attention for the scares, so he decided to make a film with “only the good scenes and none of the bad ones.” Thus, he insists he got way more out of watching bad movies with a crowd than the handful of gems he saw; “When I saw HALLOWEEN, I thought, ‘Well, I can’t make that.’ But some of those Spanish-language or grindhouse films? ‘I could totally do better than that!’”

Wright (who credits a 1980’s Jonathan Ross-hosted special on EVIL DEAD with inspiring his film career) asked Raimi, in total sincerity, whether he ever imagined the film would resonate on the level it has. Raimi claims their intentions were completely humble: they merely wanted to make a film that would play well at the drive-ins they’d scoped out for research. “I didn’t expect the reaction, and I certainly had no idea people would fall this in love with this guy,” referring to Campbell.

There were a handful of other highlights, including Campbell’s Dino De Laurentiis impression and Raimi’s story of almost pulling a “Captain Kirk” in court when defending EVIL DEAD against censorship in the U.K. (he ended up not being called up at all). They reflected on the time Bruce cracked his head open doing a stunt, on how Bruce help out readjusting lights and such while covered in red corn syrup, and the oft-told stories about how Ted Raimi and Scott Spiegel served as “Fake Shemps” when the other actors had to bail the shoot. The pair was continually laughing and wincing as they recalled these stories while constantly nudging each other in the ribs; it didn’t feel like just another stop on their ASH VS. THE EVIL DEAD promotional tour as much as it did two successful industry vets remembering the good times when they were young, dumb, and full of Karo syrup.

They left us with the goodies seen below, and sent us into the night bantering energetically about how chutzpah, a shoddy cabin, and a few hundred K added up to one of the most enduring horror films of all time. These flicks still play like gangbusters, and if you ever get a chance to see them on the big screen, then strap up and head down for a great show with a crowd that's hopefully as enthusiastic as the one on Saturday night in Hollywood. 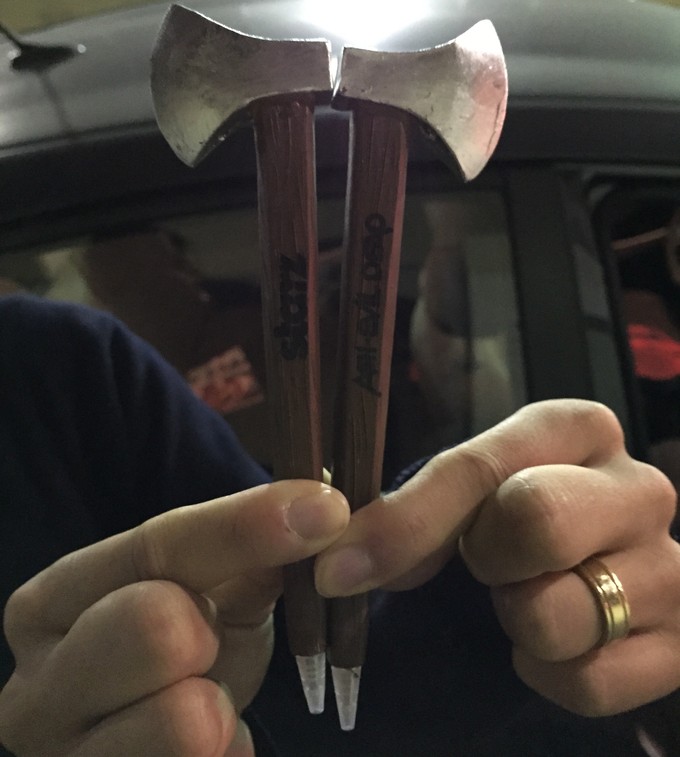