#28 THE TOWN THAT DREADED SUNDOWN

Why is THE TOWN THAT DREADED SUNDOWN #28? I have to acknowledge this film for not just doing a bland and soulless remake. THE TOWN THAT DREADED SUNDOWN was at least creative about the way they returned to Texarkana and the Phantom that haunted it incorporating the original film, some cool mythology, and a cast filled with fantastic character actors and fun cameos. The film kind of ended with a plop, but the stylistic and vivid way the filmw as made had me rooting for it all the way through. Here’s my review from January 16th, 2015! 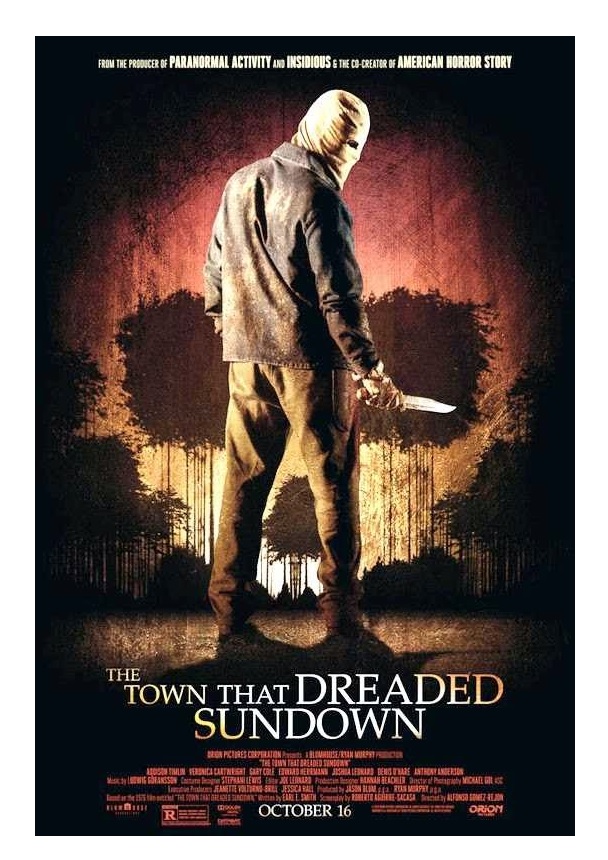 THE TOWN THAT DREADED SUNDOWN 2014 edition is a semi meta film, not as annoyingly meta as CABIN IN THE WOODS or SCREAM, but done so in a manner that still respects the original film that inspired it, building upon what has come before rather than knocking it down. 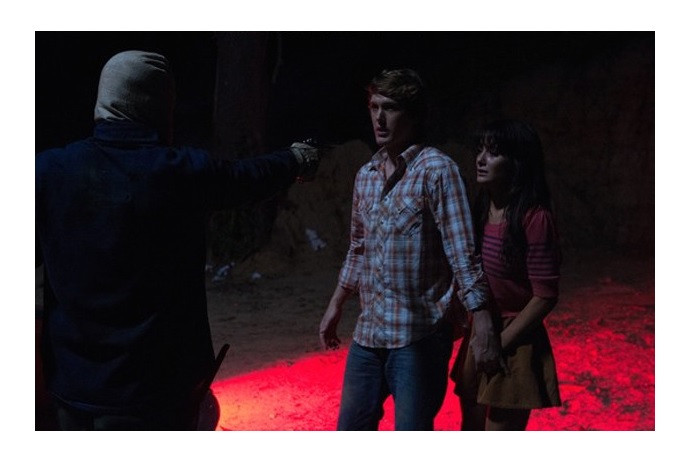 The story takes place in a world like yours and mine where the murders by a man called The Phantom by the press occurred and then in 1976, a film was made about the murders, which only proved to make things worse for the town. Still, people come from far and wide to see the town, rewatch the film on Halloween, and not let the ghostly feeling that haunted the streets of Texarkana ever die. Now, forty years after the film was released, a new string of murders are occurring that bear a striking resemblance to the original murders depicted in the original film, which were based on the real life murders that occurred in the town. One woman (ODD THOMAS’ Addison Timlin) is left alive after her date is killed by the Phantom to spread the word that the killings have begun again and that no one is safe.

What THE TOWN THAT DREADED SUNDOWN gets right is a lot. The team behind AMERICAN HORROR STORY is responsible for this film with director Alfonso Gomez-Rejon making some very interesting stylistic choices from Roberto-Aguirre Sarcasa’s script. Little details like an overhead view of the cornfield as the killer searches for his crawling victim, a well timed hand waving just when someone says “Hello,” and the brisk pace by which this film catches the viewer up to the history of the murders and the original film are all stylistically original and compelling. This is a very exciting film, with little time to sit and relax. The interspersing of flashes from the original movie during murders of a similar nature is almost subliminal and fantastically done. Every kill, every build up, every beat of this film pops with an energy you usually don’t see in slasher films. Hell, they even made the weird trombone sequence cool. 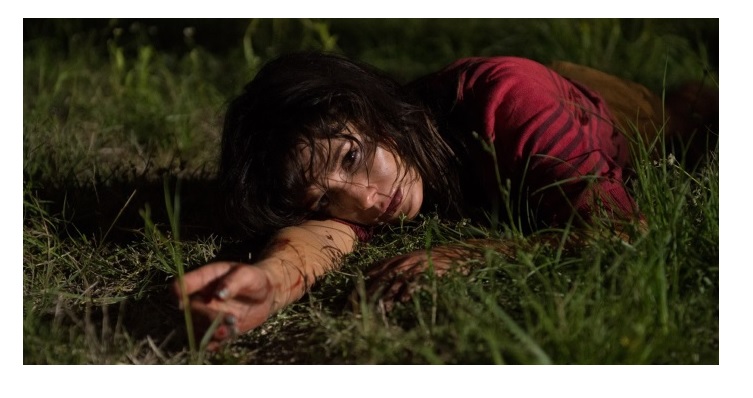 This is also a really well crafted script by Roberto Aguirre-Sacasa (who also writes GLEE and the fantastic AFTERLIFE WITH ARCHIE comic book) which painstakingly respects and references the original killings and the film, not to the point of tedium, but as a way to build this world these new killings are taking place in. The fact that we visit the home of the original’s director Charles B. Pierce, filled with all kinds of memorabilia and a fantastic cameo by AMERICAN HORROR STORY’s Denis O'Hare as Pierce’s conspiracy theorist son, is crucial to the story, yet also another layer of meta that makes this film celebrate the effectiveness of the original. I loved how Roberto Aguirre-Sacasa layered this film with basically the same blueprint of the original film, yet injected it with so much more so that fans of the original like myself, could still be left guessing.

The ending of this film, which I will not reveal, is the only misstep this film takes. The effectiveness of the original film leaves things ambiguous, as if the killer is still out there. Unmasking the Phantom here makes things feel like a SCREAM movie or worse-yet Scoobie Doo, with the villain discoursing about how he did it and why rather clumsily. For a film to spend so much time building this world, you would think the big reveal would have been handled in such a detailed and nuanced way. Instead it’s the Scoobie Doo unmasking and while things are left unanswered a tiny bit and a bit of the ambiguity is still there, this conventional ending takes away from a far superior film leading up to it.

The other thing I wanted to point out is that this is an amazing cast assembled here. Everyone here from wizened character actors like the late Edward Herrmann, Veronica Cartwright, and Ed Lauter to fun genre greats like Denis O’Hare, BLAIR WITCH’s Joshua Leonard, to scene stealers like Gary Cole and Anthony Anderson, to newcomers like Addison Timlin and the UNBREAKABLE kid Spencer Treat Clark; from top to bottom, everyone is taking the material seriously which makes this feel like a much more important film. Seeing so many genre faces at play in one film makes this something of a who’s who for horror aficionados as to which movie they’ve each actor in. Across the board, especially the lead heroine Addison Timlin and the always fun Denis O’Hare, this is a cast to die for.

I think fans of the original film are going to appreciate this new TOWN THAT DREADED SUNDOWN. The bag-headed killer looks fantastic and the kills have a brutality that suggests real rage. The cast is filled with folks taking things seriously, which is nice to see, and though there is a stumble in the end, the nuanced way in which the direction and the script pay homage to the original is pretty amazing. Like many of you, I groan loudly every time I see one of my favorite horror films of my youth is being remade, but if there were more remakes like this one, I think the stigma attached to those remakes wouldn’t exist. 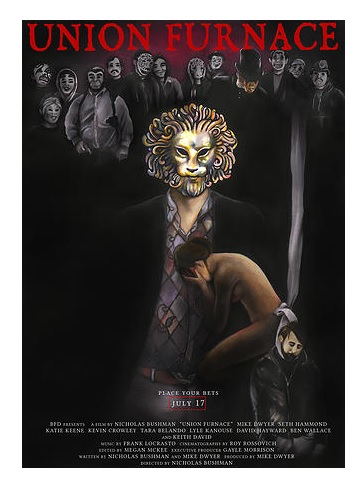 UNION FURNACE is a vicious and impressive film that hit me from out of the blue. Most likely you haven’t heard of it, but it is a devilishly fun film that takes elements of THE MOST DANGEROUS GAME and EYES WIDE SHUT and shrouds it in ambiguity and just plain odd moments. The mix of music and imagery in this film is simply amazing and I predict big things for the cast and filmmakers behind this one. Check out my full review of the film here and you can check out the film here on Vimeo On Demand!