Why is WE ARE STILL HERE #30? This unconventional horror tale revolves around a town with a hidden secret. But it’s not the horrors director/writer Ted Geoghegan shows us that is most effective here, it’s what is suggested in hushed whispers of the townsfolk and hinted at throughout the story that makes the town this story takes place in teem with darkness. Reminiscent of Kubrick in its outlandish performances and slow attention to pacing and setting, WE ARE STILL HERE is a stunning debut from a director to watch and well deserving of a place in this countdown. Here’s my review from June 5th, 2015! 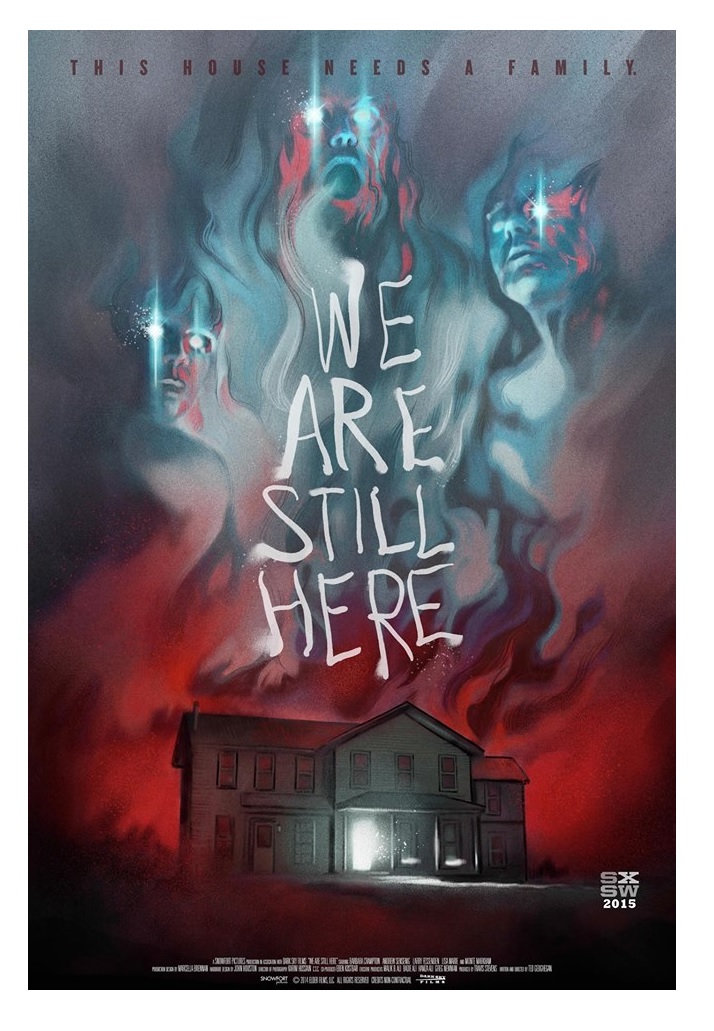 WE ARE STILL HERE is the type of film they just don’t make anymore, and that’s a shame because it’s the type of film that I love. It’s a lived in film--one that feels like the world in which the film exists is well thought out and fully realized, so you don’t so much as watch the film as you experience it, as writer/director Ted Geoghegan patiently immerses you in this house and this horrifying situation to make a film that utterly transfixing.

Having just lost their son to a car crash, devastated parents Paul and Anne Sacchetti (Andrew Sensing and RE-ANIMATOR’s Barbara Crampton) move into an old home in a New England town to start over. But upon entering the home, Anne almost immediately feels a presence and, being overcome with desperation, she believes it is her son reaching out from beyond the grave to communicate to her. Anne invites her friends Jacob and May Lewis (writer/director/actor/all around great dude Larry Fessenden and Tim Burton’s ex Lisa Marie), who are sensitive to the paranormal, to give the house a reading. But what none of them understand is that the house has a long and horrific history, and the Sacchetti family is just the latest in what seems to be many families who move into the home and never leave.

The most prevalent aspect of this film is the pacing. While this might be a film that infuriates the ADHD masses, I found the long shots of the exteriors of the household interspersed with close up shots of the seemingly banal details of the house to set a mood that you can almost touch. One scene in particular focuses on the tendril-like trees with the bare limbs free of leaves due to the winter weather with the house in the background, then cuts to a close-up of a rusty hook on the side of the house. Little moments like this may seem throwaway, but they are crucial in ratcheting up the tension. Geoghegan channels his inner Kubrick here by patiently letting the scene envelop the viewer and pull them in to dangerous places. The long shots of the car driving at the reader down the snowy roads as well as the 80s style clothing reminded me so much of THE SHINING; though the story and content was vastly different, the tone is definitely the same type of creeping unease that permeates that classic film. 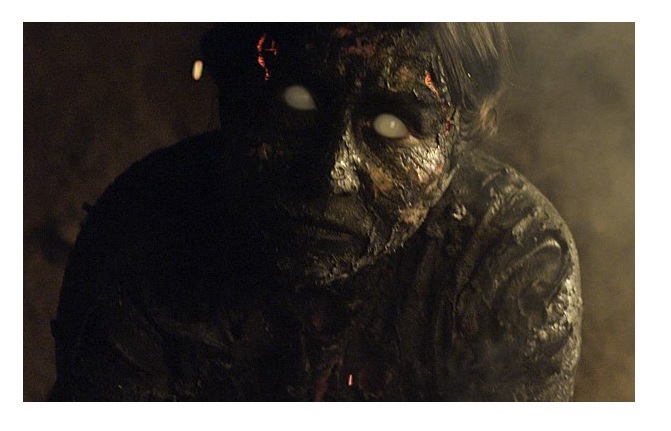 Another admirable aspect of the film is that this really feels like the tip of the iceberg in terms of the story involved. This film focuses on two different families’ plights, but there’s a greater evil at play here as you’re not really sure whether the recounting of the tragedies of the town are accurate or some elaborate ruse to cover up something more sinister. It’s this kind of ambiguity that adds to that sense of unease, as if the blacked-out spaces we don’t know make things all the more dangerous. The things we do see are horrifying. Geoghegan teases us with some clever play with shadows and forms in the background, but it’s the burning touch of the white-eyed ghosts with charred black skin that really up the horror. These original-looking specters are horrifying and reminiscent of the dark pirates from John Carpenter’s THE FOG in the way they look and move.

There are a few blips in the delivery of information that feel a bit info-dumpy, as when a neighboring couple stop by to educate the Sacchettis about the history of the house and again when the couple appear later in the film in a restaurant. Still, this exposition is necessary in filling in some of the gaps in the story. For the most part, WE ARE STILL HERE is proof positive that Geoghegan has not only done his homework on what causes effective scares, but is fully capable of delivering retro frights while making them feel fresh and new. All four of the main leads (Crampton, Sensing, Fessenden, and Marie) deliver rock solid and splendidly believable performances, with Crampton once again proving that her best acting years are ahead of her and not behind her in FROM BEYOND and RE-ANIMATOR. More horror films should take note of the patience used in this film. The need for a jump scare every two minutes is an insult and often leaves me feeling hollow upon leaving the theater. It’s almost impossible to leave this film unsatisfied as it is chock full of scares, thrills, and absolute horror. Highly recommended. 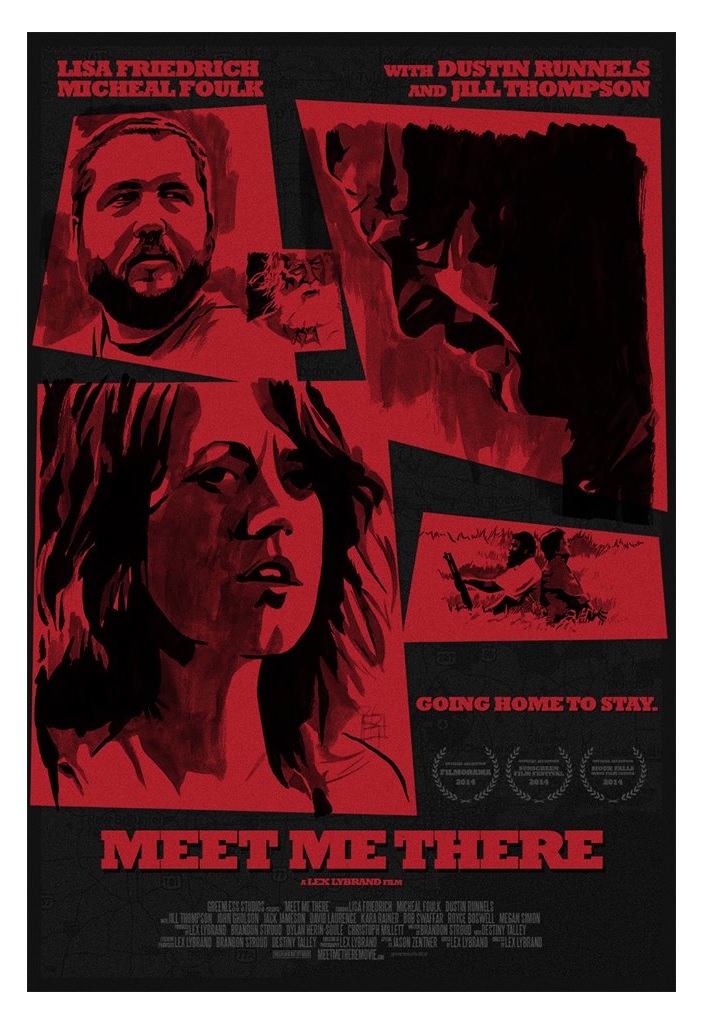 Worth noting: MEET ME THERE!

Most likely, you didn’t catch this moody little number about ghosts of the past coming back to haunt and terrorize. MEET ME THERE has some fantastic performances by its relatively unknown cast (though wrestler Golddust and comic book artist Jill Thompson show up in key roles), but I love how this film leads you by the hand down a dark and dangerous trail. Check out my full review of the film here and you can pick up the film here!

#31 – AN AMERICAN TERROR
See ya tomorrow, folks, as I count down the best of the best covered in AICN HORROR since October 1st, 2014!