The director of IMITATION GAME is bringing us another adaptation of AND THEN THERE WERE NONE! 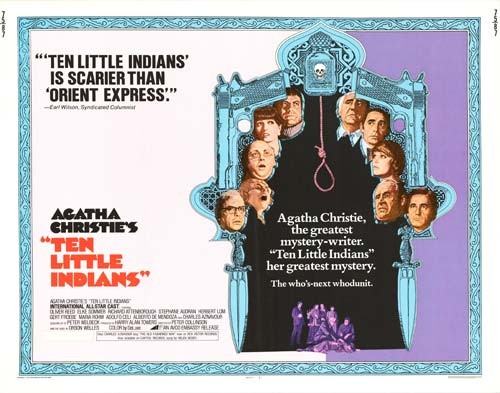 One of the ways in which THE IMITATION GAME was a success was in creating suspense out of situations where we all knew the outcome. Turing had to fall into professional exile and suicidal despair, the Enigma had to be cracked, and the Allies had to win the war, yet you still felt nail-biting tension at several points throughout the film.

If Morten Tyldum can make well-documented history seem exciting, then forcing you to the edge of your seat with an update of AND THEN THERE WERE NONE shouldn’t be too difficult.

Fox has hired Tyldum to direct an adaptation of Agatha Christie’s 1939 novel, which is touted as “the all-time biggest-selling mystery novel,” and has inspired murder mysteries all up and down pop culture, including the enduring CLUE (both movie and board game).

We don’t know the details of this new approach, other than that it will feature 10 totally unconnected people trekking to a secluded island where someone starts killing them off for the various misdeeds they’ve committed. They could bring the story to a contemporary time period, or they could keep the early-20th-century setting of the source material, but either way, they’re going to be killing most (if not all) of these core cast members in interesting, ironic ways. That’s for damn sure.

Aside from the ripoffs/homages, Christie’s book (which was originally released under two racially-offensive titles) has been directly adapted into a number of films throughout the years, including one featuring Walter Huston, one with Oliver Reed, two with Herbert Lom (in different roles), and one with the voice of Orson Welles as the man who invited all the guests to the island. It’s one of those stories that still manages to endure (I remember my tough-guy high school buddy unpretentiously singing its praises, knowing I was a CLUE fan), and is easy to dust off and refit for any time period or country (there have also been a number of foreign film adaptations). Tyldum made a lot of noise with THE IMITATION GAME, and if he can get the same pedigree of cast, this could be an ideal, crowd-pleasing follow-up.