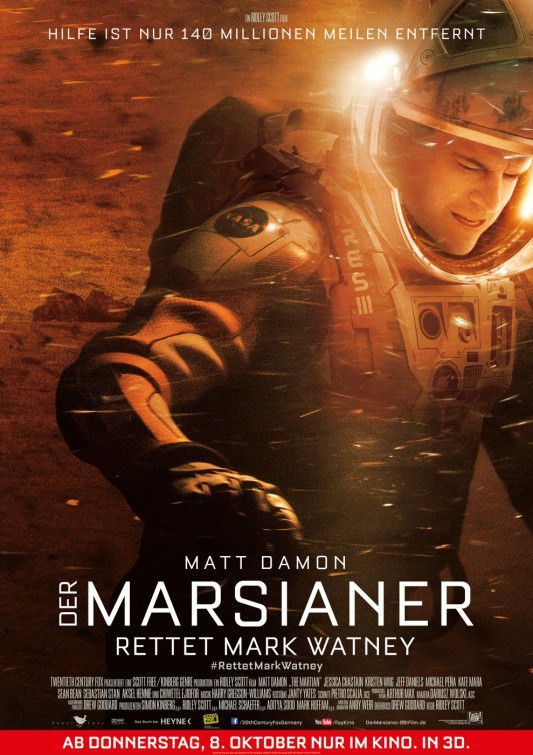 There’s a new shade of Ridley Scott!  The optimist.  Ridley Scott has taken the stunning science fiction adventure novel from Andy Weir and translated it pretty pitch perfect.  So great that if you’re a fan of the book, like me, you’d love an Andy cut that just put all your personal favorite bits back…  but we all knew we’d lose some fave moments.  For me, it was the Watney bath scene in the book.  To me, that was such a beautiful character moment.  Warm bath on Mars.   Fuck yeah.

Ok, so that scene didn’t make the movie, but a perfect mix of the science, the humor, emotion and triumph of the human spirit and most importantly…  Matt Damon was born to play Jason Bourne, Will Hunting, Tom Ripley, Loki, Management and most of all… MARK WATNEY!

If you love Andy Weir’s THE MARTIAN, then it’s because Andy’s Mark Watney grabbed you and made you love him.   We get into his head on Mars.   It’s the great joy of the book, to be the perfect man abandoned upon Mars.  Science the shit out of it.  When you hear all the politics and water cooler opinions on surviving on Mars.   Generally, they’re right.   But Andy Weir dreamed up the perfect botanist with just enough of exactly what he’d needs to get it done.

Drew Goddard was tasked with adapting Andy Weir’s pitch perfect movie novel.  Now, that isn’t a given.  There’s all sort of writers out there, Goddard did a great job putting it down.   Now this is where I make a confession.   When I read Weir’s novel, I stopped before the third act.   Not because I wasn’t loving it.   Oh no.  I just had so much faith in this film team.   I mean, Ridley Scott & Drew Goddard…   Shot by Dariusz Wolski?

You see, not finishing meant, no matter what Ridley Scott would do…  Kill or Save Watney…  it’d feel genuine.   I stopped before any plan was decided upon.  After I write this, and during part of tomorrow, I’ll finish it.   Right now.  I’m talking the movie – and man…  this movie made me locate Mars in the sky tonight and think…  Mark Watney.   Damon brought him to life beautifully.   Part of why INTERSTELLAR felt like complete horseshit to me was the direction the Damon character took.   Fuck space madness.  Enough pessimism.   I want space MACGUYVER!  I want ROBINSON CRUSOE ON MARS, but science'd the fuck out.   I mean, maybe there are still Martian rocks that you can burn and create oxygen with.   But as of now, we don’t know that.    THE MARTIAN is based on what we know right now.   And I completely believe we can do what Watney does to survive.   I love his spirit.  I like to think of my space people, the folks we’re sending to do the incredible task of making the first steps.   These are incredible people.   They don’t go Space Mad.   They do like those men in APOLLO 13.   And not that crazy diaper astronaut lady.   But all the other brilliant women that have been tremendous in space!

Mark Watney is the poster child of scientific adventure fiction, and should be everything that every boy and girl dreaming of space should idolize.   Yeah, it’ll be hard to survive…  BUT THAT’S THE POINT!  It’s hard, until they make it easier.  Isn’t it obvious to everyone watching all the movies, that we’ll either end up in a zombie apocalypse or some other apocalypse, unless we make Mars ours.   We need a great solid optimistic SCIENCE fiction film.   This story feels exactly what everybody should see and start dreaming of again.   The technology looks fabulous, too fabulous says Andy Howell aka Copernicus…  and yeah, I understand the utility over form arguments all day long – and ultimately one of the key things you learn in THE MARTIAN – is exactly how amazing duct tape and plastic can be on MARS.   I mean, really – it’s quite useful here on Earth too.   Duct Tape and Plastic sheets would be magic not too terribly long ago in the real scope of things.   I mean, it’s not like Indians or the American Settlers or anyone before them ever had Duct Tape and Plastic.   So when you see the great WEST that’s left.   MARS.   To see a space pioneer and would be space pirate, using duct tape and plastic to save his life… over and over again.   You get it.   If shit goes South.   Try duct tape and plastic first.   You get how comforting that is?  Making Martian soil turn into a Potato Garden…  That totally makes sense.   If you can grow potatoes, make water and breathable air…   You’re pretty fucking great.  Once we get Space Elevators going and we can get a ton of supplies into orbit we can make very secure structures.  Hell, 3D printing machines could do wonders in that place.   But they’re not going there.  Not yet.

Now – believe it or not, there’s a lot more about THE MARTIAN than just Mark Watney.  There’s the crew that left him presumed dead, not because of some wicked jealousy or that jazz.  No, it’s one of those  terrible accident sort of things.  There’s problems on top of problems and the exact most wrong thing happens and Watney got the short straw.   But thank goodness it was Watney.  He did things that only Watney would do and it is miraculous.   Read the book, it’s just science.   Sorry.  I really love Mark Watney.  He’s that perfect character that makes the horrible thought of being alone on a planet and he does something magnificent.   He survives – and ya know what.  Religion does help him.   But there are other characters.

The crew are all pitch perfect.  I mean, you’ve got Kate Mara, Jessica Chastain, Sebastian Stan, Michael Peña and Aksel Hennie!!  I’m going to assume you know those other actors, but Aksel Hennie is the coolest casting of the entire film in my opinion.  Aksel Hennie can lead you to HEADHUNTERS, MAX MANUS: MAN OF WAR…  but mainly run see HEADHUNTERS – his Roger Brown.  Wow.   Anyway – the crew figure less in the movie than that casting would seem to indicate, but that’s because all the NASA folk are… amazing too.  You get Jeff Daniels as the man everyone loves to hate, the head of NASA, Teddy Sanders.   He’s not evil, he’s just got to be part politician to survive and help NASA survive.   You got Boromir, Sean Bean as Mitch Henderson, who is the Mission Chief for the ARES mission, and it made me think that a piece of some terrible space material would kill him throughout the movie.  And his existence in one scene in this movie is so beautifully self-aware that I couldn’t help but love that casting visual joke – as I’m sure Andy Weir was utterly delighted by that too.   Then there’s Chiwetel Ejiofor’s Venkat Kapoor – he’s perfect.   As the man on the other side of the screen that connects with Watney… we get so much from Chiwetel’s performance.   Everybody that I’ve mentioned does fantastic work, but there’s a lot of performances that I wish I knew the names of characters and actors cuz they’re fantastic too.

Now Mackenzie Davis landed one of my favorite characters in Andy Weir’s novel.   Mindy Park.  Her role is cut pretty thin here.   And sure, I’m probably investing the character from the book a bit into Mackenzie, but while we don’t get to read her thoughts in this movie, her eyes tell everything that we need to see to know that character is that character.   Can’t wait to see more with her.

Sorry, that’s all the time I can spend outside of Watney and Damon.   The book is titled THE MARTIAN, cuz it’s about Mark Watney, every other character orbits his existence.  Every conversation is basically about saving Mark Watney, memorializing Mark Watney or working the problem that is Mark Watney.   Hell, there’s even a conversation about how NASA can get more money to retrieve the body of Mark Watney…   There’s not a moment of Mark Watney in that book, that I wouldn’t like to see Damon do.   And next read, I’ll see him clearly – and that’s great.   The character reminds me a bit of Jimmy Stewart in THE SPIRIT OF ST LOUIS.   However, as awesome as Lindberg was…  If this situation were a real situation and Mark Watney did what he does.  MY GOD.   Just put him in charge.

Seriously, he’s just a great great character, and the lion share of that is pure Andy Weir’s brilliant character.   But it was a sheer joy to see Matt Damon bring him to life with Ridley Scott’s exacting detail – and lovely sense of design.   Dariusz’s photography and the works of the visual effects department just nailed it.

How’s the 3D?   Man, you’ve gotta see MARS like this.   It’s screams to be seen in the biggest bestest format you can manage.   And that last third of the story that I was saving?  So glad I waited.   IRON MAN indeed!  So great.

Thrilling stuff.  Inspiring!  Mark Watney Space Pirate!  I can’t wait for the bearded version of Mark Watney Space Pirate posters!  I want to see NASA Recruitment Art posters to join Mark Watney Space Pirate on Mars!   It will happen.   I know it.  After the film was over, I talked to some of the audience members.  One was a co-worker of Andy Weir – who said that Matt Damon’s Mark Watney… that’s Andy.   That’s great.  Also the day the movie option came in, he apparently quit his job!  This guy loves Andy.   That was cool.  Also saw some folks in their official Nasa Curiosity team shirts.   All those folks were over the moon for this movie.   Lots of applause, lots of laughs and a genuine cheers.

It’s that kinda story.   This is a CAN DO movie.   Everybody did exactly what they should have!   This is a note perfect adaptation about a wondrous possible adventure on the planet Mars.   I really can’t wait to watch the shit out of it!