On break from shooting STAR WARS EPISODE 8, Luke Skywalker was at a Pub... and...

Hey folks, Harry here with a silly scoop.   I love silly scoops about Star Wars, because really - we don't want to know the BIG things.   But these little things, they're fun.   We all saw that leaked image of Luke Skywalker in STAR WARS: THE FORCE AWAKENS garb - and he was sporting a big burly beard! I love that.   However, we haven't seen his look for Rian Johnson's STAR WARS EPISODE VIII.   And it turns out after shooting last night, some of the crew went out to a pub in Ireland and a photo was taken and the photo- as photos do, got spread to us here at AICN.   I've cropped the photo, even though I didn't get it from the other person in the photo, but they're not a public figure and shouldn't get knocked around for this.   BUT - at least in this photo, Luke Skywalker (aka Mark Hamill) isn't sporting a BIG BURLY BEARD.   Instead...   He's fresh faced Luke - and gosh, it's nice to see Luke's chinny chin chin again!   I'm giddy.  Rian Johnson is so committed to shooting STAR WARS EPISODE VIII, that he wrote me personally to say he won't be coming to BNAT this year.   THE GREATEST SACRIFICE EVER.   That means he's gonna make a STAR WARS movie that caves our collective skulls in.   Of course, there's this shit called Spirit Gum - and perhaps Luke has a fake beard in Episode VIII...  see, we haven't really spoiled a thing, instead...  Do you want Luke clean shaven or bearded? 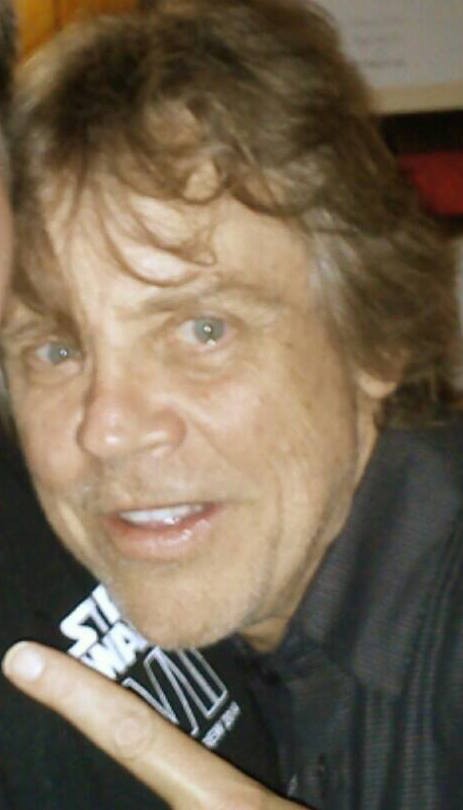 May the Force Be With You,
Harry
P.S. Thanks Goes To The Bothan Spy that Shared
Follow headgeek666
Readers Talkback
comments powered by Disqus
Trending