Let's get a little nerdy and talk about the lenses being used on Star Wars: Rogue One.

Ahoy, squirts! Quint here with really exciting news if you're into the tech side of filmmaking. Specifically, we'll be talking about lenses.

Lenses are pretty much the paintbrushes of a director and cinematographer. Different lenses give you a different feel. The reason why a widescreen movie today (2.35:1 aspect ratio) looks different from the widescreen movies most of my generation grew up with is due mostly to a change in lens technology (although film stock vs. digital is also a factor).

Spielberg mastered the anamorphic lens, which is what gave his movies all those great lens flares. John Carpenter's another one who shaped his look with those lenses. Basically what that means is when you record an image to film you get more visual information stored because it's taking up the entire celluloid frame, but in a squished square form that requires a scope lens to unsquish and make into that glorious horizontal rectangle we love so much. 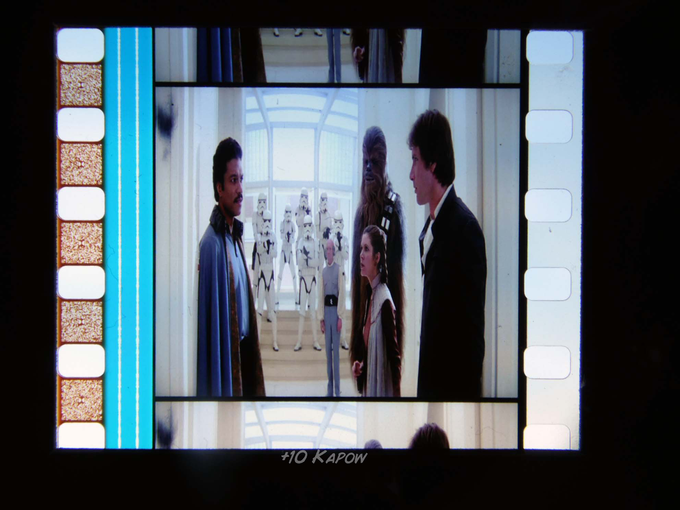 Many current filmmakers, most of them greatly inspired by Spielberg's use of these lenses have gone anamorphic, even though it's not the norm. JJ Abrams catches shit for his lens flares, but that's a direct influence from Spielberg. Andrew Stanton used anamorphic lenses on John Carter.

It's not common, but it does still happen. So why, then, is it news when Star Wars: Rogue One's cinematographer Greig Fraser choses to shoot anamorphic, as discussed on Indiewire? Well, it's because he's reportedly using the very same newly recreated Ultra Panavision 70mm lenses that Tarantino used on The Hateful 8.

Let's make this clear right now: Rogue One will NOT be shot in 70mm, at least not in the traditional sense. I mean, it'd be just about the coolest thing in the world to have a full on 70mm shot Star Wars movie, but that's not what this news is.

The news is that these 70mm lenses are being used in some extent on Rogue One. They could have an adaptor for 35mm if they are shooting the majority on film or they're being utilized for the Alexa 65 (standing for 65mm, which is technically what most 70mm is - that extra 5mm accounts for the soundtrack space on the celluloid), which is 6k digital camera that is Arri's attempt at a digital camera that can come close to capturing the image quality of 70mm film cameras.

It's not known if Gareth Edwards is shooting the whole film with this new Alexa 65 camera or just pieces of it, like Abrams shot some pieces of The Force Awakens with the IMAX cameras, but it's confirmed they are using that camera. What is known is that unlike IMAX aspect ratio (which turns from a rectangle into a big square ala Christopher Nolan's The Dark Knight), these lenses mean you can go wider than standard widescreen. That's taking it from 2.35:1 to 2.76.1.

I know all this sounds super technical, but what it ultimately boils down to is that Rogue One is going to be a very widescreen movie and it's going to look fucking amazing. One of the benefits of these 70mm lenses is that it captures a ton of info, so that means the visual clarity is going to be crisp and with a good DP and bright projection should make you wet yourself a little bit from pure geeky joy.

Forgive the tangent into film class, but I thought some of you guys and gals might be interested in this kinda thing.